Ash in the attic! Half-smoked cigar dropped on cinema floor by Winston Churchill in 1953 fetches £4,800 at auction

The cigar was dropped by Winston Churchill while he and his wife were attending a film premiere at the London Coliseum in Westminster, London, in 1953

A part-smoked cigar dropped on the floor by Winston Churchill has fetched £4,800 at auction.

The cigar was discarded by the then Prime Minister while he and his wife were attending the film premiere of American musical Call Me Madam at the London Coliseum in Westminster in 1953.

It was picked up from the floor by cinema usherette Violet King who was so excited by her political keepsake that she wrote to 10 Downing Street to ask Churchill’s permission to tell her friends about it – to which he agreed.

The memento was recently sold at auction by Violet’s great nephew, Julian Lewis, 50, from Stoke, Staffordshire, where it achieved a price of £4,800.

‘She picked it up and treasured it for the rest of her life.

‘Violet died in her 90s back in the 1980s but I remember her telling me the story.

‘It was her claim to fame. She was very proud of the cigar. She liked to talk about it and show it to people.

‘In April, 1953, she wrote to Winston Churchill to ask if she could tell her friends she had his cigar.

‘Amazingly, she received a letter on Downing Street-headed paper with a friendly note signed by Churchill’s personal secretary Jane Portal.’

The note read: ‘The Prime Minister wishes me to thank you for your letter of April 1.

‘He has, of course, no objection to you telling your friends that the cigar you found is his and much appreciates your goodwill.’ 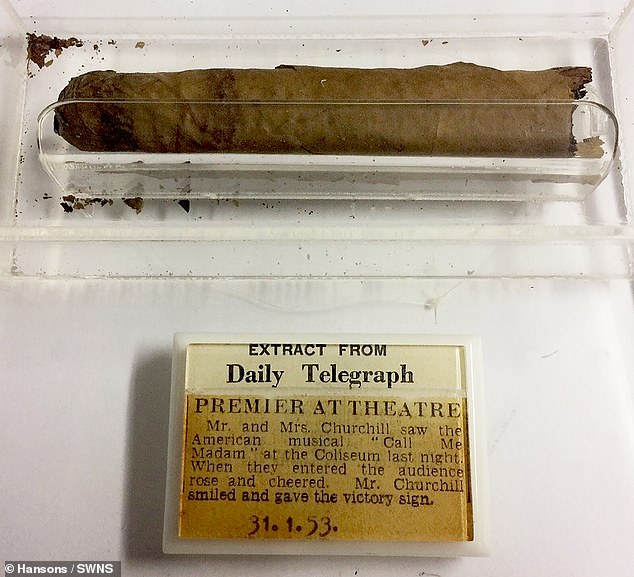 It was picked up from the floor by cinema usherette Violet King who treasured the keepsake throughout her life. But it was recently sold at auction by her great nephew, alongside a newspaper clipping from the Daily Telegraph from time of his visit

Violet preserved the letter by encasing it in plastic alongside the cigar as well as a newspaper cutting from the Daily Telegraph about Churchill’s visit to the Coliseum.

‘She had the cigar, letter and newspaper cutting encased in this heavyweight material.

‘That’s why they’ve have survived so well. Churchill’s DNA must still be on the cigar.’

The newspaper cutting, dated January 31, 1953, was headlined Premier at Theatre.

It said: ‘Mr and Mrs Churchill saw the American musical Call Me Madam at the Coliseum last night.

‘When they entered the audience rose and cheered. Mr Churchill smiled and gave the victory sign.’ 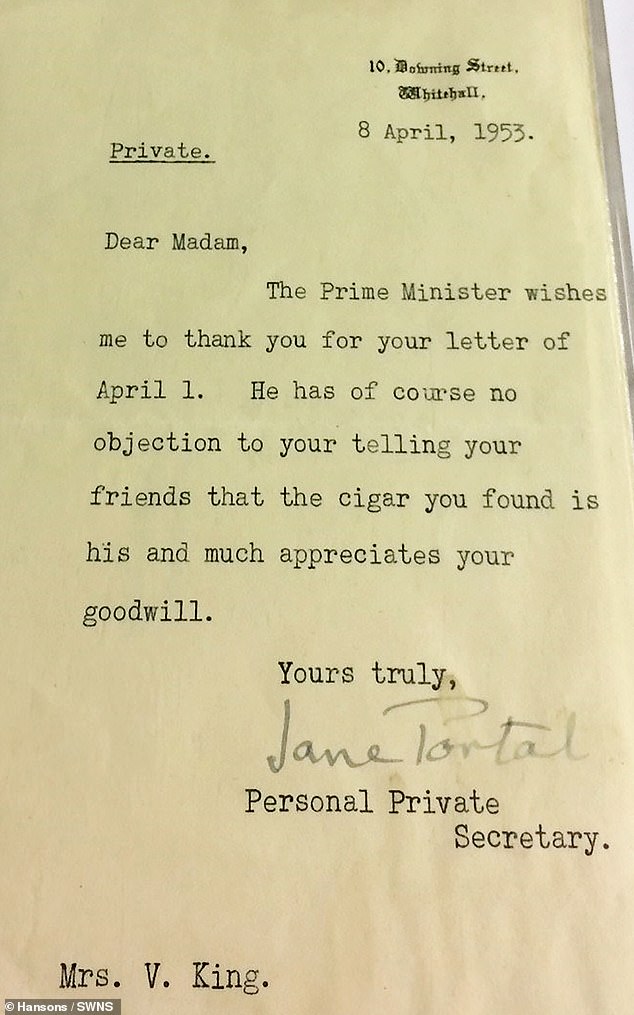 Violet was so excited by her political souvenir that she wrote to 10 Downing Street to ask Churchill’s permission to tell her friends about it – to which he agreed. This letter was included in the auction lot 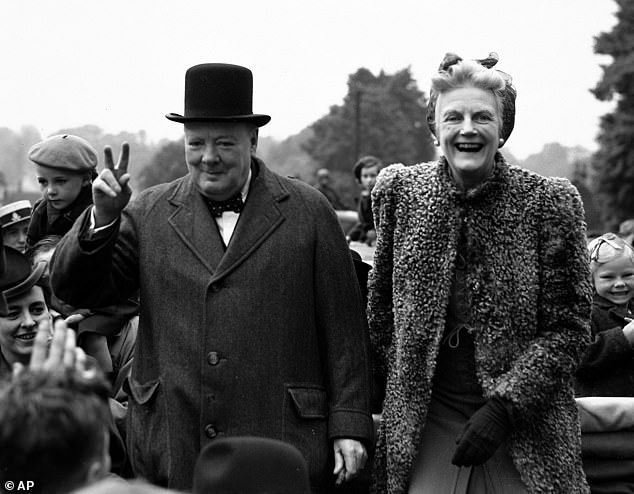 Churchill (pictured alongside his wife Clementine) was Prime Minister from 1940 to 1945, when he led Britain to victory in the Second World War, and again from 1951 to 1955

The encased cigar was bought by a private buyer at a Hanson’s auction in Etwall, Derbyshire.

Mr Lewis said: ‘The cigar and letter were left to my father who gave them to me about 30 years ago.

‘They’ve been stuck in a drawer all that time.

‘The cigar only comes out very occasionally to show friends if Churchill’s name crops up in conversation.

‘I’m really pleased it’s sold and gone to someone who will appreciate it. It’s just been stuck in a drawer at my house for years.’

Charles Hanson, owner of Hansons Auctioneers, said: ‘This was an incredible historical find.

‘We believe that, thanks to the protective plastic placed around the cigar, it will still contain Churchill’s DNA.

‘It deserved to do well and I’m delighted for both our seller and buyer.

‘It’s a privilege to sell an item which belonged to a man who was Britain’s prime minister not once but twice.

‘The fact that someone was prepared to pay such a high price for Churchill’s cigar shows the esteem he is still held in decades after he led our country.’

In 1953, Winston Churchill was in charge of the country for a second time.

These little piggies didn’t stay home — they escaped off the back of a truck in Suffolk County on Friday, prompting local cops to spring…