Half-hour of horror at 250,000ft: How two spacemen survived 4,700mph rocket explosion as they headed to the International Space Station and plunged back to earth during 29-minute journey

Two astronauts survived a terrifying rocket explosion at 4,700mph with a ‘ballistic descent’ that plunged them to the ground in a 7G ‘ballistic re-entry’.

Russian Aleksey Ovchinin and American Nick Hague dramatically returned to Earth alive yesterday after the booster on their Soyuz rocket broke and the craft automatically turned back from an altitude of 50 miles.

The rocket travelling at thousands of miles an hour malfunctioned on the edge of space on what was supposed to be a six-hour journey to the International Space Station, cockpit audio revealed.

Just 119 seconds into the voyage, the crew became weightless when they should have still been feeling the pressure of massive acceleration.

Using parachutes to slow their capsule’s descent, they landed 15 miles from the city of Jezkazgan in Kazakhstan, 310 miles from the launch site, and were later pictured smiling during medical checks.

Ovchinin remained calm after the astronauts were rocked violently around in their seats by the force of the booster malfunction, saying: ‘An accident with the booster, 2 minutes, 45 seconds. That was a quick flight’.

‘We’re tightening our seatbelts,’ Ovchinin said in a video of the dramatic malfunction.

Russia says it has opened a criminal investigation and grounded all Soyuz flights. The accident comes weeks after a hole was discovered in the International Space Station amid talk from the Russian space authorities of deliberate sabotage. 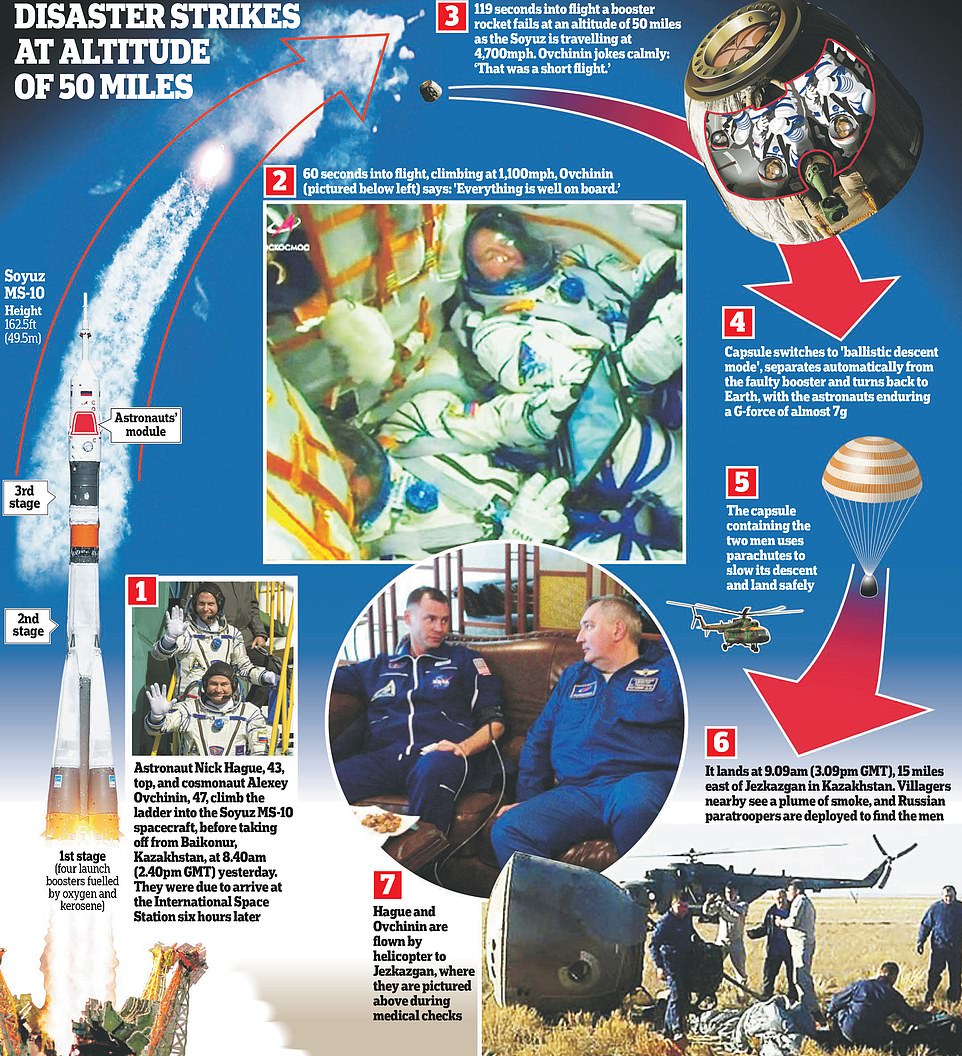 Video footage from the launch at the Baikonur Cosmodrome shows a large plume of smoke coming from the rocket at the moment it failed and footage from inside the capsule shows the two astronauts being violently shaken about.

The accident bears similarities to the 1986 Challenger disaster when one of its boosters failed at lift-off causing an explosion that killed seven.

Astronauts have been involved in Soyuz malfunctions twice before, one in 1983 when a crew was forced to eject from a Soyuz rocket as it exploded on the launchpad. In 1975 a Soyuz capsule crashed back to Earth from 90 miles up after a rocket failure, but the crew survived.

The rocket, which was designed in the 1960s, has also had one booster fail in similar fashion to today’s malfunction. In 2002 a booster rocket malfunctioned and the rocket which was carrying a satellite crashed in Kazakhstan killing one person on the ground.

In total Soyuz rockets have been launched 745 times of which 21 have failed. Thirteen of those failures have been since 2010, calling into question the continued reliability of the rocket. 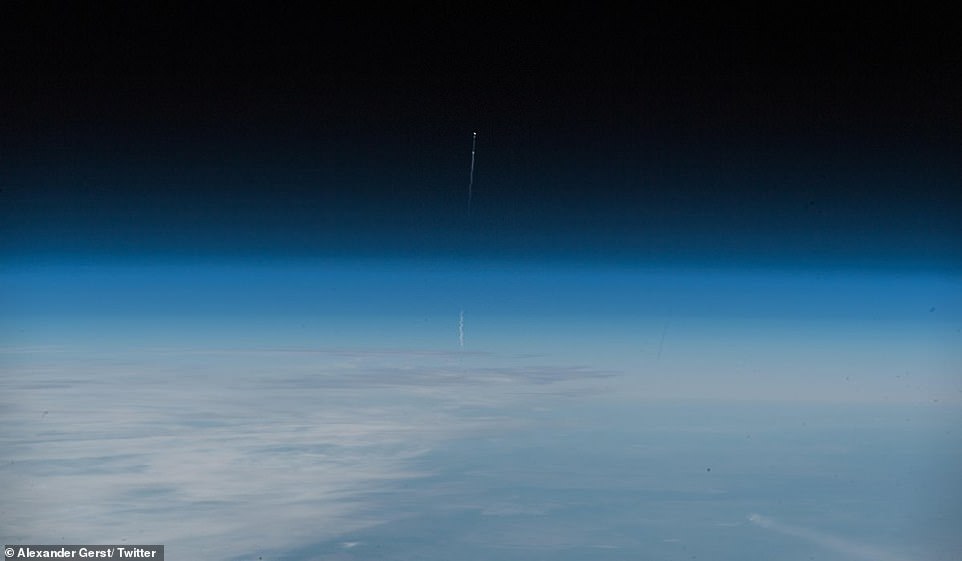 A photo taken from the International Space Station by astronaut Alexander Gerst who is currently working there shows the flight path of the aborted Soyuz spacecraft as it soared into the atmosphere and almost entered the Earth’s orbit before eventually plummeting back to earth because of the technical malfunction in its booster. Gerst said: ‘Glad our friends are fine. Thanks to the rescue force of 1000 SAR professionals! Today is again showing what an amazing vehicle the #Soyuz is. Spaceflight is hard. And we must keep trying for the benefit of humankind’