The National Rifle Association has championed the idea of a "good guy with a gun", but no firearms will be allowed when US Vice-President Mike Pence speaks at its annual meeting – sparking criticism from Parkland students, who say schools should be afforded the same protection.

And in a rare occurrence, even some NRA supporters have voiced opposition to the prohibition. 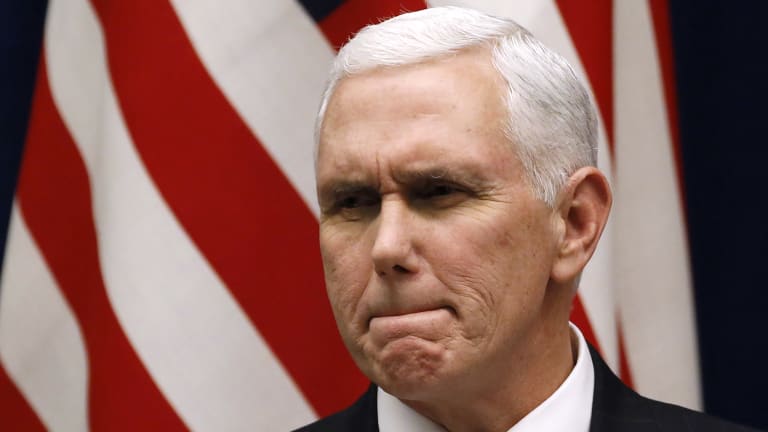 Guns won’t be allowed when US Vice-President Mike Pence speaks at the NRA annual meeting.

Pence is scheduled to speak at the annual NRA gathering in Dallas on May 4, and, to be sure, many attendees will be packing guns, knives and other weapons for the event – which includes "more than 20 acres" of firearms exhibits expected to draw 80,000 members.

But the NRA said the US Secret Service would co-ordinate security for the Pence speech and would not allow weapons in the arena while he is present.

"As a result, firearms and firearm accessories, knives or weapons of any kind will be prohibited in the forum prior to and during his attendance," the NRA said. A detailed list of prohibited items includes ammunition, drones, gun parts, firearm magazines, and even signs and glass containers.

With the exception of the Pence event, lawfully carried firearms will be permitted at the convention centre and the host hotel, the NRA said, advising members to comply with federal, state and local laws.

The NRA is complying with laws that prohibit firearms from being brought into areas where Secret Service protectees visit, agency spokesman Shawn Holtzclaw told The Washington Post in a statement on Sunday. That includes events in open-carry states such as Texas, he said.

"Individuals determined to be carrying firearms will not be allowed past a predetermined outer perimeter checkpoint, regardless of whether they possess a ticket to the event," Holtzclaw said.

Attendees were similarly restricted from carrying weapons during President Donald Trump's speech to the NRA in Atlanta last year.

The NRA, bolstered by Trump, has been a vocal proponent of allowing more guns in public places, including schools. However, the exception for the convention has raised eyebrows and prompted scepticism among students and at least one parent who lost his child in the February 14 shooting at Majory Stoneman Douglas High School in Parkland, Florida, in which 17 people were killed.

"On so many levels, this is enlightening. According to the NRA, we should want everyone to have weapons when we are in public," Fred Guttenberg, father of slain Parkland student Jaime Guttenberg, said on Twitter on Sunday. "But when they put on a convention, the weapons are a concern? I thought giving everyone a gun was to enhance safety. Am I missing something?"

The NRA did not respond to a request for comment. 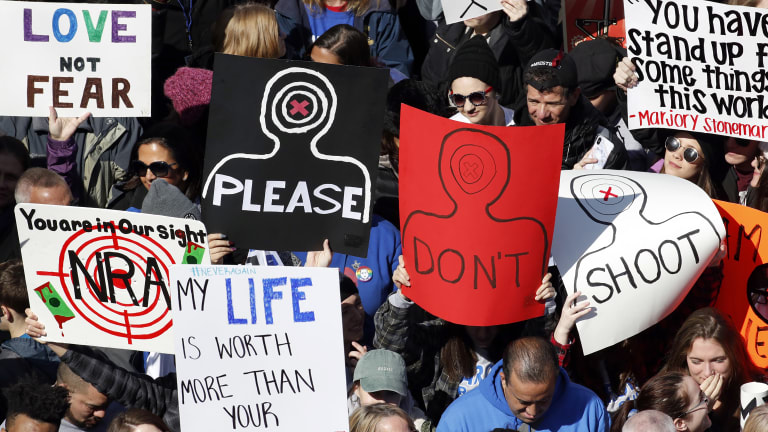 “March for Our Lives” strategist Matt Deitsch said “it sounds like the NRA wants to protect people who help them sell guns, not kids”.

Matt Deitsch, who graduated from the Parkland school in 2016 and is the chief strategist for the March for Our Lives protest, expressed similar scepticism.

"[You're] telling me to make the VP safe there aren't any weapons around but when it comes to children they want guns everywhere? Can someone explain this to me?" Deitsch said on Twitter on Saturday. "Because it sounds like the NRA wants to protect people who help them sell guns, not kids."

March for Our Lives did not respond to a request for comment.

Parkland student Cameron Kasky simply said on Twitter on Saturday: "The NRA has evolved into such a hilarious parody of itself."

David Hogg, a Parkland student, circulated a petition on Sunday calling on Pence to cancel his NRA appearance.

Even gun enthusiasts and apparent NRA members are displeased at the prohibition. At Texas CHL Forum, a message board for gun owners, commenters aired their frustrations.

"Obviously even republicans and so called leaders don't trust the 'good guys.' I realize it's the VP, but still makes our whole argument look foolish," a commenter who self-identified as an NRA member said on Thursday.

"You may disagree … but in my opinion the very people that claim to protect the 2A [Second Amendment] should never host an event that requires disarming the good guys. Sad. No excuses for this … it makes us look stupid," the commenter said.

Another self-identified NRA member agreed, saying on Friday: "Me personally, I won't be listening to him speak. I won't be going anywhere that I can't carry my firearm. It's essentially the nations largest get together for gun owners and they won't let law abiding legal gun owners carry guns because someone who's supposedly pro 2A thinks its too 'dangerous'? that's liberal logic right there."

Other users chimed in, saying the Secret Service was simply carrying out the law.

"Look at it this way, imagine what a prime opportunity it would be for some rabid gun hater to take a pot shot at the VP AT the NRA Annual Convention," one commenter who self-identified as an NRA instructor said on Saturday. "The campaign ads would write themselves."