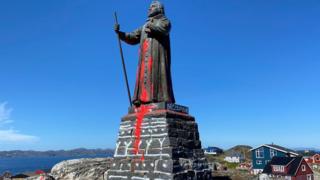 Citizens in Greenland are voting on whether to keep a controversial statue of a Danish-Norwegian missionary, seen as a symbol of Danish colonialism.

The Hans Egede statue is in Nuuk, the tiny capital of the vast Arctic island where just 56,000 people live.

Last month red paint was daubed on the statue, with the word “decolonize” – apparently linked to the global anti-colonial protests.

Greenland is part of Denmark, but has extensive autonomy.

Statues honouring figures linked to slavery or colonialism have been vandalised or torn down worldwide since the death of George Floyd, an unarmed black man, in US police custody on 25 May.

The Black Lives Matter movement has provoked intense debate about colonial injustices in Europe, as well as in the US and former British colonies.

A duplicate statue of Egede outside Frederik’s Church in Copenhagen was vandalised in the night on 30 June – also with the word “decolonize” scrawled on it.

Early on 3 July Copenhagen’s world-famous Little Mermaid statue was also vandalised, with “racist fish” daubed on its stone plinth. It has been damaged by vandals several times before.

The Nuuk administration says that so far there are 555 votes in favour of keeping the statue in place at Kolonihavnen, and 324 votes to remove it. The vote, online and by post, runs from 3 to 21 July.

The vote is for the 23,123 people in Sermersooq municipality, which includes Nuuk. Following more debate after the vote, the authorities will make a decision about the statue on 2 September.

Historically the living standards of the ethnic Inuit – by far the majority – have been below those generally enjoyed by Danes in mainland Denmark.

For centuries before colonisation by Denmark the Inuit survived in the harsh climate of Greenland, through fishing and whale- and seal-hunting.

The territory relies on an annual block grant of 3.9bn Danish kroner (£475m; $600m) from the Danish government. Greenland’s main export is seafood, nearly all of which goes to Denmark.

Egede, born in northern Norway, opened up Greenland as a Danish colony in the early 18th Century.

He got royal backing, in what was then the united kingdom of Denmark-Norway, to explore Greenland, hoping to renew contact with long-lost Norse settlers. However, he did not find any – the inhabitants were all Inuit.

He founded a trading company and a Lutheran mission near present-day Nuuk.