This is the second in our series of pieces featuring writers’ reflections on their lessons from months in lockdown.

Save articles for later

Add articles to your saved list and come back to them any time.

Somewhere around the start of lockdown 2.0, the pain that had been circling since March began to gnaw at the base of my spine. Not a new sensation but more insistent and at times fierce. Unable to swim or visit my osteopath or rely on my usual defences or distractions, I was forced to turn inwards.

I dug out an old mindfulness meditation. I lay on my back and breathed. It was harder than it sounds. My breath kept getting tangled in thoughts. The more I tried to herd the thoughts, the shallower my breathing. Sometimes it felt like inhaling bricks or old carpet. Often it was just boring. 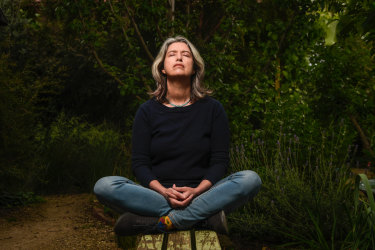 By returning to meditation during lockdown, Kate Cole-Adams understood so much more about herself and others.Credit:Justin McManus

But in the weeks then months that followed I learned to follow the breath into my body, not in theory but as part of a shifting interior map; some days a tributary, others a swooping, eddying surge.

I discovered a world different from the one I had been holding at bay. Lying there one winter’s afternoon, legs hooked onto the bed, I became aware of a new feeling in my body, something infinitely tender and complete. In my mind I heard the word ‘home’. I realised that here, tucked beneath my diaphragm, was what I’d been looking for in all those decades of moving from house to house.

Other times, I’d notice fleeting fugitive images – a brown man sitting on a fence, a woman labouring in someone else’s kitchen grieving the son she had lost. I had no idea what they meant.

The pain didn’t go away. But the space around it – and me – seemed to expand. Small things started to change. When my husband put a kitchen utensil in an inexplicable new place, or my daughter stared blankly at my moving mouth from behind her earphones, I found myself less inclined to protest – not because 'what’s the point?' but because in the dense empty space of our new world I could see their courage and vulnerability. Sometimes even my own.

I dreamed I drove across town to my son’s apartment and when he opened the door, I opened my sleeping arms and we hugged. I felt the fibre of his T–shirt and the muscle of his shoulders beneath it.

I found myself thinking more about other people. People in towers and tiny apartments, people living in fear, living alone. People in pain. I took stock. I looked at the ease of my life, glimpsed the cocoon of my whiteness/ my wellness/ my relative wealth. And even knowing all of this, the inability to travel more than five kilometres from the comfortable house where I slept and ate and shat still folded and unfolded my brain like crumpled paper.

A few weeks before lockdown ended, I read an article by climate scientist Joelle Gergis. “We have arrived at a point in human history that I think of as the ‘great unravelling’.” I’d heard it before, read it before. But something in her desolation and despair reached into me and I began to feel what I have known all along. A shudder behind my ribs. Cause and effect. And the stirring of grief in my body was the same as the feeling of home, and the feeling is love.

Time to wake up.

Kate Cole-Adams is a writer and journalist.