Grandmother, 81, and her disabled son are kicked off TWO Ryanair flights after staff ‘couldn’t fold his wheelchair’ – before ‘pilot blames delay on “the lady with the wheelchair”‘

An 81-year-old grandmother was left ‘humiliated’ by being told she had to get off a Ryanair flight – or leave her disabled son’s wheelchair behind.

But after being re-booked on a flight the following day, Kathleen Dunne was horrified when she was again asked to disembark the aircraft again because staff were struggling to fold the chair.

Ms Dunne, from Wallasey, in the Wirral, Merseyside is a carer for her son Gary, 53, who has severe mobility problems and is deaf as a result of a bout of measles as a baby.

Although the pair missed the first flight, from Liverpool John Lennon Airport on Tuesday, they were eventually allowed to fly from Manchester Airport on Wednesday.

Ms Dunne, from Wallasey, in the Wirral, Merseyside is a carer for her son Gary, 53, who has severe mobility problems and is deaf as a result of a bout of measles as a baby (pictured together)

However retired shopkeeper Ms Dunne says she felt ‘mortified’ after the pilot made an announcement attributing the delay to ‘the lady with the wheelchair.’

She said: ‘It was horrible. I was shaking, and it was so hard to explain what was going on to Gary because he can’t hear.

‘We have been flying with them for years and there has never been any problem. I didn’t feel like going on holiday after that.’

Ms Dunne said the problem started as they went to check in at Liverpool Airport, when a member of staff said rules regarding the stowing of wheelchairs had changed.

The pair were eventually allowed to board, only to watch staff struggling with the wheelchair through the cabin window.

Ms Dunne said: ‘They came on the plane and said the wheelchair has got to be a certain height. I am 81 years of age, I don’t know how to fold it.

‘They said you will have to get off the plane or leave it. I said he can’t walk. I just said get me off, everyone is looking at me.’

Airport staff were eventually able to work out how to fold the wheelchair and the pair were re-booked on the next available flight, this time from Manchester Airport.

But Ms Dunne said she was again asked to leave the plane, and was led under the aircraft and over to the hold.

She said: ‘There was a nice man who said one way or the other I will get this wheelchair on the plane. But the pilot said over the intercom “sorry for the delay it is not our problem, it is the problem of the lady with the wheelchair.” 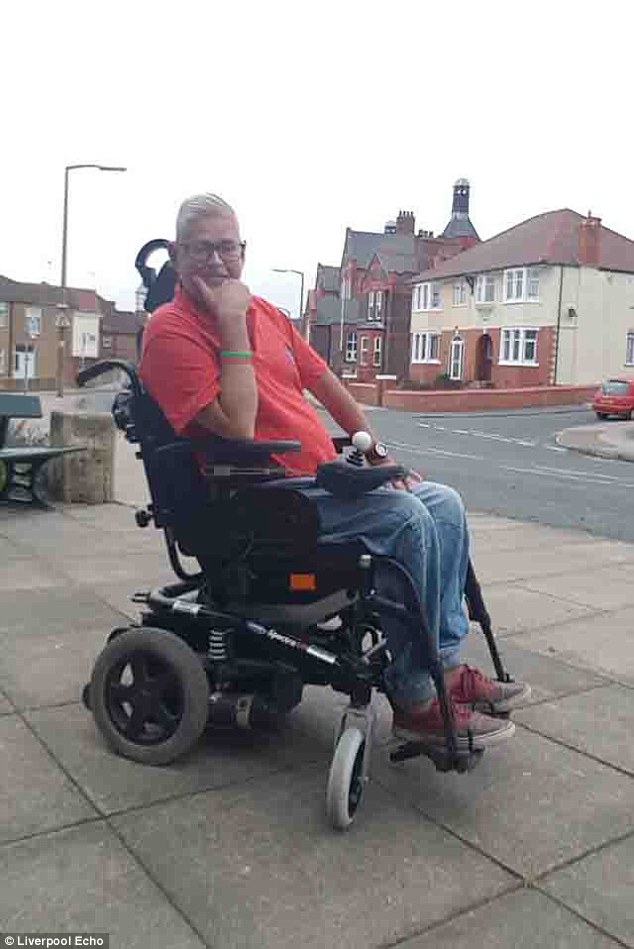 OmniServ said Ryanair’s wheelchair size restrictions state that all wheelchairs must fold down to 81cms or less to be loaded and stored in the plane’s hold. Pictured: Gary, 53, in his wheelchair

‘People were saying I can’t believe he said that. I am still upset about it now.’

A spokeswoman for Ryanair said wheelchair services at both airports are provided by outside companies, ‘at great expense to the airlines.’

A spokeswoman for OmniServ, which provides special assistance services at Liverpool Airport, said: ‘On behalf of the entire Liverpool John Lennon Airport team, we apologise for the inconveniences Kathleen Dunne and her son experienced.’

OmniServ said Ryanair’s wheelchair size restrictions state that all wheelchairs must fold down to 81cms or less to be loaded and stored in the plane’s hold.

The company said: ‘Various members of the team worked tirelessly with Ms Dunne to ascertain if the wheelchair could be collapsed to meet the requirements.

‘Unfortunately, she did not believe it could be collapsed and did not have a manual, so they had to be taken off the flight. After additional trial and error, the team was able to remove a pin and collapse the wheelchair.

‘Ms Dunne, her son and the wheelchair were able to take a later flight out.

While OmniServ does not create policies around wheelchairs on board flights, we endeavour to work closely with the airport, airlines and other service providers to ensure a seamless service to all passengers, including those with a disability or reduced mobility.’

OCS, which provides the service at Manchester Airport, did not respond to a request for comment.

Ms Dunne accepts she did not have the manual for the chair, and did not know how to fold it, but says she was not notified of any rule change and had never had problems before.