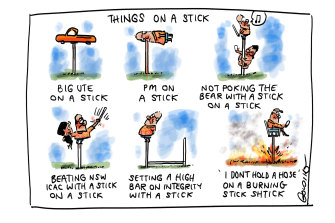 To submit a letter to The Age, email [email protected] Please include your home address and telephone number.

What amazing persistence and resilience Kim Elzaibak has shown in bringing her abuser to justice – “Sex abuse survivor confronts tormentor” (The Age, 11/12). I agree that her story should be used as a case study to train police; it demonstrates not only the life-long affects of abuse of children but also how those affects can be compounded by police inaction. Elzaibak’s tenacity and grace make her a great role model for us all.
Charlotte Harrison, Hawthorn

So the Australia Council has insisted on changes to how Circus Oz is run by reconstituting its board and membership to reduce the influence of artists and former employees (The Age, 11/12). Circus Oz has indicated it cannot agree with these requirements and will have to close. Is it being stripped of its funding because it does not line up with the Australia’s Council’s prejudices?

As a person who ran an arts organisation for 20years with support from both state and federal governments, I would hope that government would listen to, and trust, their clients, not just stop funding them. They are bureaucrats, we are the ones creating the performances. They need us to keep performing.
Don Mackay, Croydon

Only good for a laugh

“When is a politician worth covering?” asks your editor (The Age, 11/12). I would say only when they put their foot in their mouth so we can laugh at them. The rest of the time it is pollie spin, and more lies and promises that they will break anyway, and not worth listening to.
Alfred Zommers, Warrandyte

As a permanent resident in a coastal town, I was pleased to see our worker accommodation needs getting attention (Sunday Age, 5/12). But given the collective power of the coastal councils assembled, could the search for solutions be more creative than land rezoning and building? Especially as bushfire overlays prevent encroachment into hazardous areas.

We need local, state and federal governments to restructure tax incentives in the short and long-term rental market to make more accommodation available. What about incentives for holiday property owners to accommodate essential workers, rather than short-term holiday makers only
Penny Hawe, Lorne

Jon Faine observed that Alan Tudge “ought to have been twice sacked already – once for Robodebt and the second time for the audacious car park rorts” (Sunday Age, 5/12).

These are relatively recent incidents. Had Tudge been charged and then sentenced for his alleged role with fellow Turnbull government ministers Greg Hunt and Michael Sukkar in their joint or several 2017 contempt of the Victorian Court of Appeal, he may have forfeited his parliamentary seat and subsequent history and Australian lives he impacted may have been considerably different (the three men avoided the charges after apologising to the court).
James Gaffey, Ivanhoe East

Leunig’s little ode to anti-vaxxers (Spectrum, 11/12) does not fill me with joy. I am concerned for the many immunocompromised people who are afraid to frequent public places, due to fear of infection from the unvaccinated, wandering around enjoying their “freedoms” to infect others. Shame, Leunig.
Mike Puleston, Brunswick

All lives should matter

Turduckens are appearing at Coles and Aldi stores, and in speciality butchers for Christmas (The Age, 11/12), the season of good will towards men. Though not towards turkeys, ducks, and chickens, which are fattened until they can barely walk, then slaughtered because their corpses taste good.

Turkeys, ducks and chickens have their own lives and personalities, their own friendships, their own capacity to feel pain. Lucky ones can be kept as pets, yet we are unlikely to make a tasty trifecta for Christmas of Fido stuffed with Fluffy stuffed with Tweety.
Rosemary Clerehan, Armadale

Stand up for Assange

What is our government doing to ensure Julian Assange is not extradited to the United States? We know what is behind the extradition: he revealed some of the US’ dirty secrets which no ethical government would have endorsed. Since our government is so pally with the US, it should not be a problem to have Assange returned to Australia instead. Show us how much influence you have, Scott Morrison.
Doris LeRoy, Altona

I too was taught Ancient Greek (Letters, 11/12), but in the 1950s. However, Greek pronunciation is only a rough guide to Greek terms borrowed into English. In English, Socrates is pronounced “Sokrateez” (stress on the “o”), not “Sohkratees” (stress on the “a”), and micro is nearly always pronounced with a long “i”.

And in all English dictionaries I have consulted, omicron is “omikron” (stress on the long “i”). I suspect that “ommerkron” or “ommikron” has been imported not from modern Greece but (once again) from the United States.
Nigel Sinnott, Sunshine West

The time to worry about the pronunciation is when the little “o” (o-micron) transmutes into the big “O” (Omega).
Claude Miller, Castlemaine

It seems ironic that, in the age of cancel culture, a National Gallery of Victoria exhibition displaying the work of fashion designer Coco Chanel, a documented Nazi collaborator and alleged spy, proceeds without a murmur.
Don Nicholson, Thornbury

Gay Alcorn sends an exclusive newsletter to subscribers each week. Sign up to receive her Note from the Editor.