Good Samaritans to the resc-EWE! Canoeists who spotted a sodden sheep stuck in a river wrestle it out of the water before giving it a lift home

Canoeists came to the resc-EWE of a drowning sheep from a swollen river.

Quick-thinking musician Tom, 32, his partner, Victoria, 29, also a musician, and his sister Bethan Kwaterski, 29, from Shrewsbury, Shrops, was determined to help the sheep, which was struggling to stay above the water.

Tom jumped into the water to save the panicking ewe from the River Severn before lifting it into his canoe and carrying it to safety of dry land.

The trio made sure the animal was unscathed before it was reunited with the rest of the flock.

Bethan, 29, an advertisement creative, said: ‘The sheep had slipped down the river bank and was stuck in the mud, submerged in water and shivering.

‘It had clearly been there for a while and was very distressed, making a lot of noise.

‘We tried various manoeuvres, but in the end the only thing for it was to jump into the river and try to pull his legs out of the mud.

‘I don’t know how, but eventually my brother was able to break the poor thing free, without getting stuck himself.’

Victoria added: ‘He challenge was not over yet, we needed to find a place where we could safely return him to dry land without taking him too far away from where he had fallen.

‘Getting him on board was no easy task, he was clearly weak and could not find the energy to jump when we encouraged him, so we had to do all the heavy lifting – he weighed a ton.’

‘On board the canoe we gave him lots of TLC as he shook the river water from his sodden wool, in sheer relief.

‘It really was like he knew he was safe and that we were there to help him.

‘We ripped bits of greenery off the side of the bank to get some nutrients and water inside him, which he absolutely loved and couldn’t get enough of.

‘We very quickly found a place to drop him and my brother helped it up onto dry land.

‘As soon as he got back on his feet, he got stuck into some more greenery, then trundled off happily as if nothing had ever happened.’ 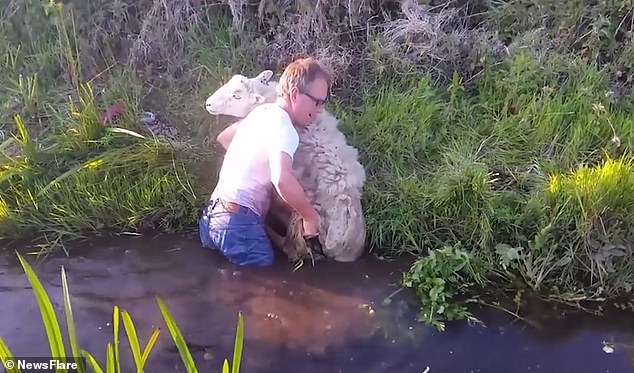 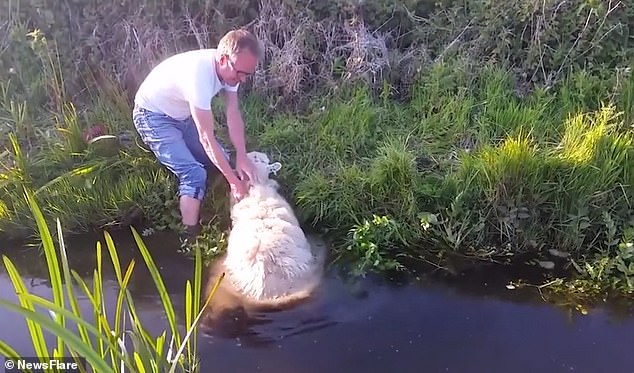 Life saver: The drowning sheep is given a second chance but not all animals are so lucky 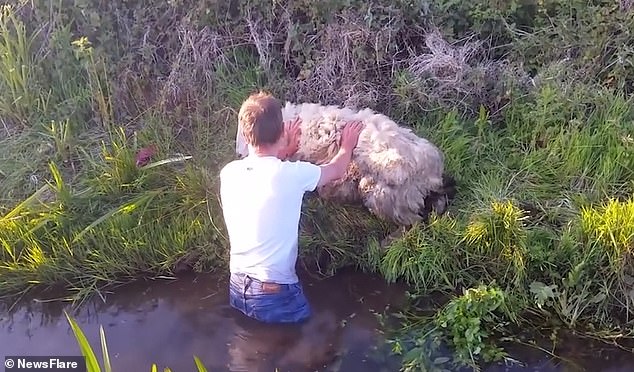 Brave rescuer: He jumped into the water without thought to himself as he feared the creature would drown

They had been enjoying an Easter Sunday outing when they spotted the sheep, which tend to run into trouble at least once a month.

Other canoeists have discovered drowned cows along the river but not all the animals survive the waters.

Bethan said steps needed to be taken to protect the animals.

She said: ‘I know the photos look funny, but there’s a hidden issue here that I think we should be looking at.

‘The canoeing coach, Alex, told us that this happens all the time, sometimes people find the sheep dead and that they’ve had the same thing happen to a cow before.

‘I am so glad that we were there to help last Sunday, but surely a bit of pressure on farmers, and the council, to invest in some electric fences or deterrents would keep animals safe from the edge of the river.’ 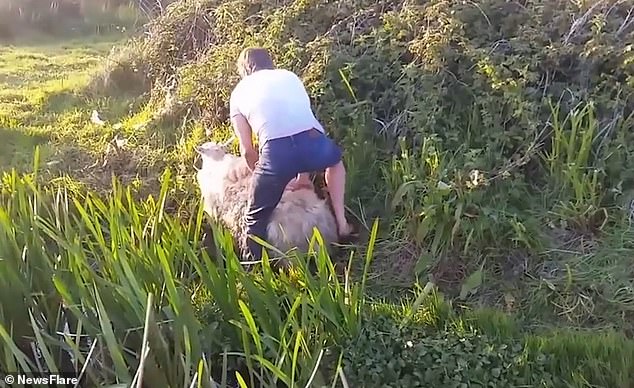 Happy ending: The sheep was returned to the rest of the flock and given a second chance