Girl, two, is found wandering alone near a busy road in just her socks after walking out of nursery unnoticed

A two-year-old girl walked out of a nursery unnoticed and was picked up by an appalled mother who found her wandering near a busy road in her socks, without a coat on.

The girl left Tots Pre-School Nursery in Haverfordwest, Pembrokeshire in Wales at around midday on Monday.

The nursery is on the outskirts of Haverfordwest town centre, close to a busy junction, a main road, and a supermarket. 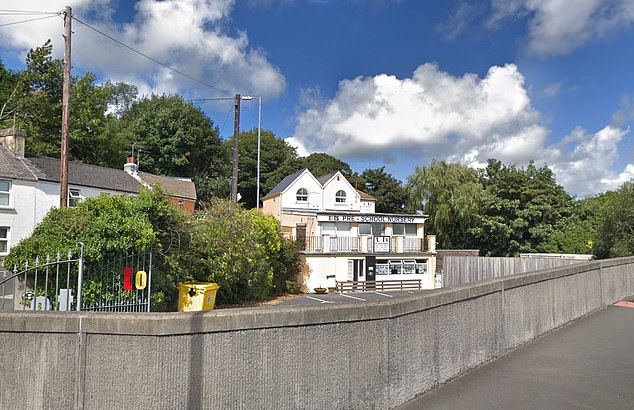 A two-year-old girl was found wandering near a busy road with just her socks on and without a coat after walking out of Tots Pre-School Nursery in Haverfordwest, Wales (pictured)

A woman was driving past at the time and immediately pulled over to help the child when she noticed her.

The woman, who did not want to be named, said: ‘She seemed very happy but she was on the pavement.

‘She was wearing socks and didn’t even have a coat on. She’d crossed the junction and gone onto the pavement near the local Lidl store.

‘I had already stopped the car at this point because I had noticed her. She was heading into the road so I got out of the car to collect her.

‘Another motorist had also pulled over at this point and we realised that she must have come from the nursery.’

The other driver returned the girl safely to the nursery and the police were contacted.

The mother added:’This shouldn’t happen, especially near a very busy road like that.

‘As a mother I was appalled by it. I just hope improvements are made because if this happens again someone could get seriously hurt.’

The nursery said new measures had already been implemented to make sure there was no repeat of Monday’s incident.

The child, who was unharmed, will continue to attend the nursery.

A spokeswoman for Tots Nursery said: ‘We deeply regret the incident that took place.

‘Strict new measures were put in place immediately and structural alterations to the nursery will be made as soon as possible to ensure that an incident of this type can never happen again.

‘I have and will continue to speak to all parents explaining what has happened in person.

‘I contacted our governing body whose representatives came the next day and we are working with them regarding this incident.

‘I have thanked the parents of the child involved for their understanding of the situation and in their trust in allowing us to continue caring for their child.’

Police confirmed they responded to a call at around 12.10pm on Monday reporting a young child being unattended in the street.

A spokeswoman for the force said an officer went to the nursery to ensure the safety of the child, and the relevant services were informed of the incident.

Care Inspectorate Wales (CIW), a body that registers and inspects services, including nurseries, said it was investigating the issue.

‘CIW are aware of the incident at Tots Nursery, and are liaising with Pembrokeshire Council and investigating further,’ a spokeswoman said.

‘We cannot comment on specific issues at this time, but can assure you that we are looking into the concerns raised.’