Girl, four, rams a tuk tuk into a busy market after accidentally starting the engine when her father was away

A little girl caused a minor accident in a crowded market in east China after ramming her father’s tuk tuk into a stall.

The four-year-old girl had accidentally started the engine of the vehicle when his father left her alone to move some boxes.

One person suffered fractures while two other sustained minor injuries and were taken to hospital in Cangnan county, Zhejiang province. A little girl caused a minor accident in a crowded market in Cangnan county, Zhejiang province’s east China’s  after ramming her father’s tuk tuk into a stall

Video footage of the accident yesterday shows a shop owner squatting on the ground when a tuk tuk suddenly came charging towards him.

He quickly leaped up and jumped to the side as the vehicle crashed into his stall before coming to a stop.

While the tuk tuk had narrowly missed him, it ran over two people, who were seen trapped under the rear wheel after the crash.

The culprit – the four-year-old girl in a pink dress – was seen tumbling down from the driver’s seat.

She was able to stand up after the vehicle stopped, appearing unhurt.

It is believed that the girl was accompanying her father, who was a supplier to shop owners at the market.

The incident is under police investigation. 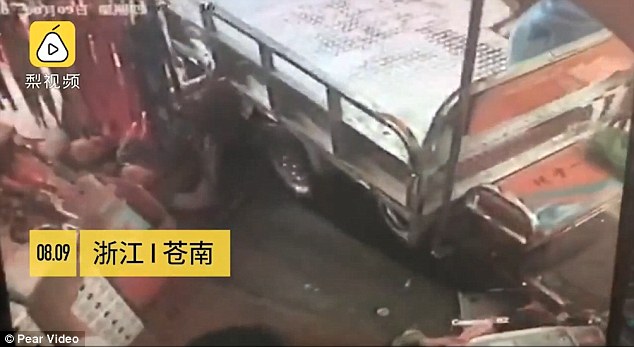 While the tuk tuk had missed the man, it ran over two people, trapping them under vehicle