New York: Ghislaine Maxwell’s cell in a Brooklyn federal jail was “permeated” with raw sewage last week, according to a new court filing.

Bobbi Sternheim, an attorney for the British socialite accused of grooming and abusing underage girls, included the sewage leak in her latest list of complaints about conditions at the Metropolitan Detention Centre in Sunset Park. 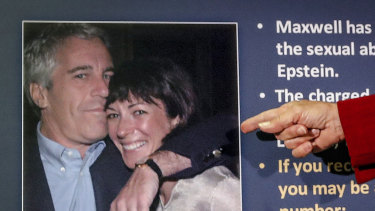 A US attorney points to a photo of millionaire Jeffrey Epstein and British socialite Ghislaine Maxwell during a news conference last year.Credit:AP

Maxwell, 59, has for months claimed she’s being tortured by staff at MDC, who allegedly shine a light into her cell every 15 minutes overnight among other indignities.

She has cited the sorry state of the jail on the Brooklyn waterfront as a reason to release her on bail while awaiting trial for allegedly grooming and trafficking underage victims of her former boyfriend, Jeffrey Epstein.

Those arguments have failed. The 2nd Circuit Court of Appeals expressed some concern about Maxwell’s experience behind bars, but declined to order the Bureau of Prisons to change security protocols.

In her new letter to the court, Sternheim highlighted comments by Judge Colleen McMahon that there is “no excuse” for conditions at MDC and its sister jail in lower Manhattan.

“Numerous complaints have been brought to the Court’s attention regarding recurring problematic conditions at the MDC and over-management of Ms Maxwell. Little if anything has been done to improve Ms Maxwell’s conditions,” Sternheim wrote.

In a separate letter made public on Wednesday, the government defended Maxwell’s security protocols. Assistant US Attorney Maurene Comey wrote that the overnight “wellness checks” were necessary to confirm Maxwell is breathing.

Maxwell has broader access to her lawyers and legal papers than most other inmates, Comey wrote.