A VIDEO captures moments of heckling that Minneapolis police officer Derek Chauvin faced while departing a court hearing on Friday.

The ex-cop charged in black man George Floyd’s death was escorted by several sheriff’s deputies out of a building and past a fence. 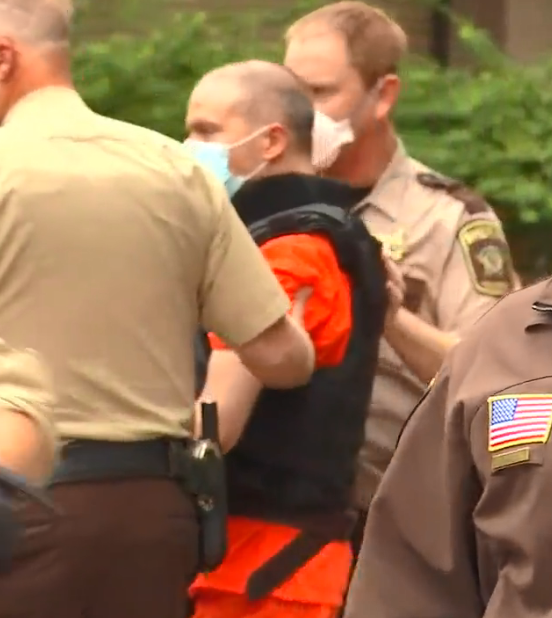 As Chauvin, 44, clad in an orange jumpsuit, made his way into a black car, people could be heard yelling expletives at him.

The shouts continued as the black car with Chauvin drove away with a Henneppin County sheriff’s SUV driving in front and two behind, a video from KMSP shows.

Chauvin, who is charged with first degree murder, showed in court for the first time, after prior appearances through videolink.

Judge Peter Cahill removed Hennepin County attorney Mike Freeman from the case, as well as three of his colleagues.

Cahill said Freeman made a mistake by sending his staff to speak to the medical examiners without including independent witnesses on the matter.

“It was sloppy not to have someone present,” the judge said.

Cahill added that the local prosecutors “have made a show of particular cruelty” in Floyd’s killing that could be an “aggravating factor” and lead to a lengthier sentences if the ex-cops are convicted.

Protesters outside the courthouse also held a “die-in,” lying on the ground for eight minutes and 46 seconds, which was the amount of time that Chauvin knelt on Floyd’s neck in May.

After Chauvin’s court hearing, lawyers for Floyd’s family spoke at a press conference and pushed back on the defense attorneys’ statements that the black man died of an overdose.

“The only overdoes was an overdose of police force,' the Floyd family’s lawyer Ben Crump said.

“'The world saw what happened.”