Wales captain Gareth Bale avoided a row with Fifa by wearing a ‘No Discrimination’ armband for his team’s 1-1 draw with the USA last night instead of the controversial rainbow one.

It comes as campaigners condemned Qatar and Fifa as bullies for threatening England captain Harry Kane with a booking or worse if he dared to wear the rainbow armband.

The England and Wales skippers had both planned on wearing the accessory for their first World Cup matches in Doha yesterday to show their support for the LGBTQ+ community in a country where homosexuality is still illegal.

An extraordinary stand-off raged during the night before the FA capitulated three hours ahead of yesterday’s England game against Iran.

Fans called the FA ‘spineless’ after it said it could not risk the captains potentially being ‘forced to leave the field of play’ for wearing OneLove armbands.

Football’s governing body has strict rules about apparel and the rainbow armband was banned.

Kane and the FA had vowed to defy the ban on principle even if it meant a hefty financial fine.

For the game, Kane also wore the Fifa-approved ‘No Discrimination’ armband. England won the match 6-2, with 19-year-old Jude Bellingham getting the team off to a strong start with his first international goal.

A statement from the group said: ‘We cannot put our players in the situation where they might be booked, or even forced to leave the field of play.’

Former footballer Roy Keane criticised Bale and Kane’s decision, saying they should have taken a yellow-card in order to send a powerful statement. 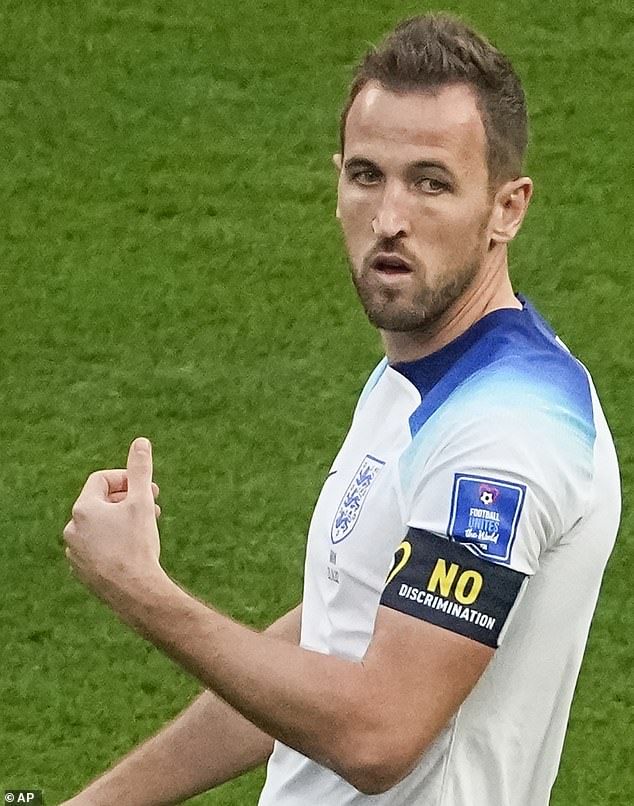 ‘I think the players could have done it for the first game – took the punishment, whatever that might be,’ he told ITV. ‘If it’s Kane you’re risking getting a yellow card, but that would have been a great statement.

‘Do it for the first game, get your yellow card and what a message that would have been. Take your medicine and in the next game you move on. You don’t wear it because you don’t want to get suspended but, I think it was a big mistake because both players – Wales and England – should have stuck to their guns and done it.

‘No matter the pressure from the outside and the associations, have the belief, if that’s what you believe, then go with it.’ 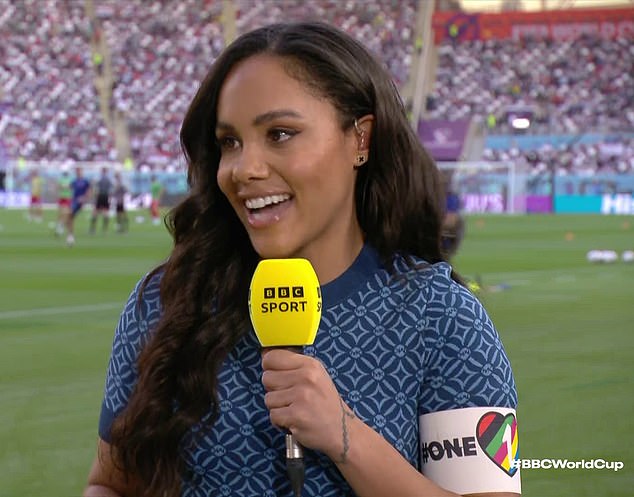 Gay rights campaigner Peter Tatchell said: ‘The OneLove armband was the tiniest of gestures. It was a weak campaign but even that was too much for Fifa, who have bullied the England team to not wear it.’

He called on captains to ‘spend just 30 seconds’ at press conferences speaking on rights of women, LGBT people and migrant workers, adding: ‘Fifa have crushed the OneLove campaign with the threat of yellow cards. It’s time to show Fifa and Qatar the red card.’

At the Khalifa International Stadium, England fan Steve Wright, 43, from Derby, said: ‘They’re just bowing to the oppression of the Qatari government.’ But Simon Hill, 55, from near Cambridge, said: ‘Focus on the football.’

However, BBC presenter Alex Scott wore the rainbow armband at the stadium during the build-up to the England game. Last night Fifa ordered Belgium to change its second kit and remove the word ‘Love’ from the collar of the rainbow-trimmed white shirt.