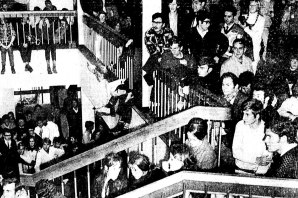 He put his opinion to a meeting of about a dozen students in the union after a day which saw unprecedented student militancy on the Monash campus.

Earlier a crowd of 2000 students had held a campus meeting to discuss the new draft regulations. Dr Matheson had been advised by the SRC not to speak at this meeting, in case it became unruly.

On a majority vote the meeting warned that students would not accept the power of the discipline committee and warned that the university “may find discipline to be unenforceable.”

After this meeting about 400 students staged a two-hour sit-in beside the university administration building.

The filled the upstairs section of the building, outside the vice-chancellor’s office, and listened to speeches by fellow students.

“Fundamentally, I’m not opposed to what you are proposing,” he told them.

Dr. Matheson agreed to address a lunchtime mass meeting of students in the union building on June 13 – after the vacation.

“As far as student liberty is concerned and the liberty to demonstrate on the campus about the NLF or whatever, as far as I’m concerned, there is not the slightest intention of interfering with it,” he said.

“It is when the university becomes involved – as distinct from the individuals – that’s when I become concerned.”

Dr. Matheson said that over the vacation he would consider the proposals put by the students opposed to the changes in the regulations.

Dr. Matheson said he would not concede that neither he nor the university would not examine acts that students performed off campus.

“I’m worried on your behalf about the name Monash has now got,” he said.

“If you knew what was said to me in the outer world you would be too.

“Perhaps discipline is not the way to do it. I want to get it across that the university should be isolated from the group acts of students.”

Dr. Matheson said the afternoon’s demonstration was based on an article which appeared in “The Age” on Wednesday.

“The facts were right, but the inference was wrong,” he said.

“I’m fundamentally concerned that the article implied that the changes were considered because of the NLF issue.

“There is no fundamental change in the regulations. They are intended to clarify the present position.”

At the campus meeting, the 2000 students passed three motions, declaring:

That the authorities should take cognisance of student objections to regulations and the conviction which these objections were held;

That students should not be subject to university discipline for private activities off campus;

That student discipline is a matter for students, and we demand that students comprise 50 percent of the membership of the discipline committee in the future.

A fourth motion, passed by a substantial majority of the students present, stated that the university adopt the regulations, “we will not accept their power to do so, and they may find discipline at the university to unenforceable.”

Meanwhile, a group of students called the Campaign for University Freedom (CUF) has been established and has plans to coordinate further activity.