The international police organisation Interpol has been asked to help police break the $10 note counterfeit ring. 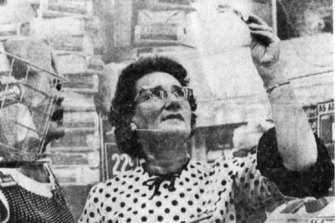 A shop assistant in Bourke Street holds up a $10 note to the light to check its authenticity.Credit:The Age Archives

This latest move to smash the forgery gang was made yesterday when the number of forged $10 notes discovered by Victorian banks and major retailers declined sharply.

The Chief Commissioner of Police (Mr. Arnold) has directed the two senior police officers in charge of investigations, the assistant commissioner in charge of crime investigations (Mr J. Rosengren) and the CIB chief (Superintendent L. Bent) to communicate with Interpol headquarters in Paris.

From there other countries — particularly those neighbouring Australia — will be asked to pay particular attention to the Victorian inquiries.

The approach to Interpol seems to indicate that the expertly produced forgeries found in the past few days were printed overseas. 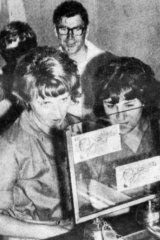 A genuine and fake $10 bill are displayed side by side at E S & A Bank on the corner of Elizabeth and Collins Streets.Credit:The Age Archives

Detectives on Wednesday were considering the chance that the notes came from Japan or some other Asian country.

However, Superintendent Bent was non-committal yesterday on a suggestion that the wording on the typewritten instructions issued by the counterfeiters to their agents was uncharacteristic of an Australian criminal.

Particular reference was made to the final sentence of the schedule: “Let your earnings be your reward and do not look for glory.”

The schedule was released on Wednesday after a conference In Melbourne attended by senior police officers and Reserve Bank officials.

It had been called to work out a co-ordinated plan of action to smash the counterfeit plot.

Late yesterday Mr. Arnold said detectives working on the case believed they had a “fair idea” of the Identity of the Victorian ringleader.

Police realise the counterfeit ring will not be tail put out of action until:

The ringleader or leaders are caught;

The counterfeit plates and printing devices are found.

Yesterday detectives front Malvern CIB led by Detective Sergeant J. Ryan, who has directed most of the investigations, searched extensively throughout Melbourne for the plates.

Police have now settled down to hard routine slogging in efforts to smash the counterfeit ring.

Superintendent Bent said yesterday the whole counterfeit position was going through “somewhat of an interlude.”

“The passing of the notes has generally tapered off,” he said. “A man would be a fool to try to pass a counterfeit one now.”

Early reports yesterday that police had smashed the ring were denied by detectives.

They say the ring has definitely been damaged because of the widespread publicity and police activity.

One detective said: “If I were one of them I’d hang low for 10 years because of the heat.”