THESE graphs reveal why the North of England has been hit hardest by the coronavirus pandemic.

England has now re-entered a tier system after a second national lockdown,with most Northern areas in the toughest Tier 3 restrictions. 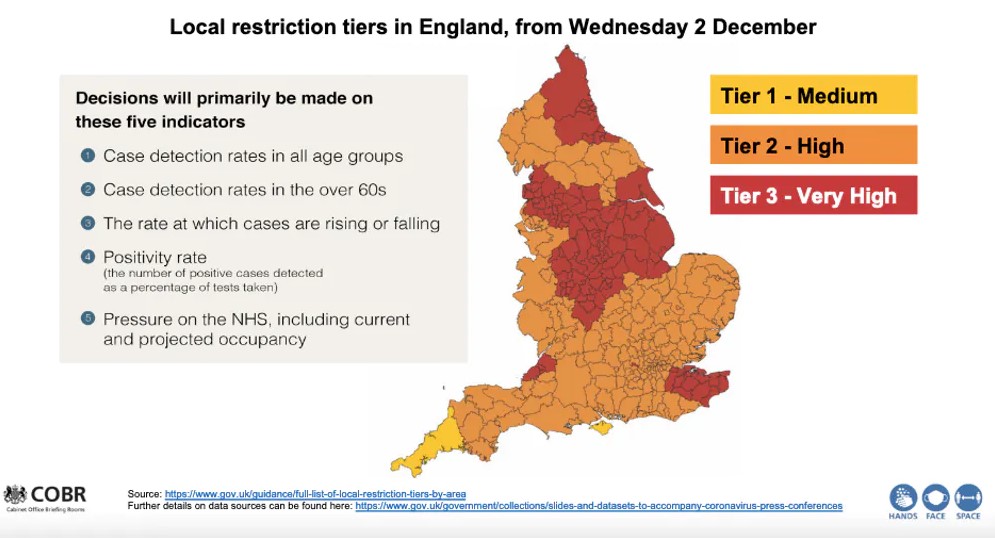 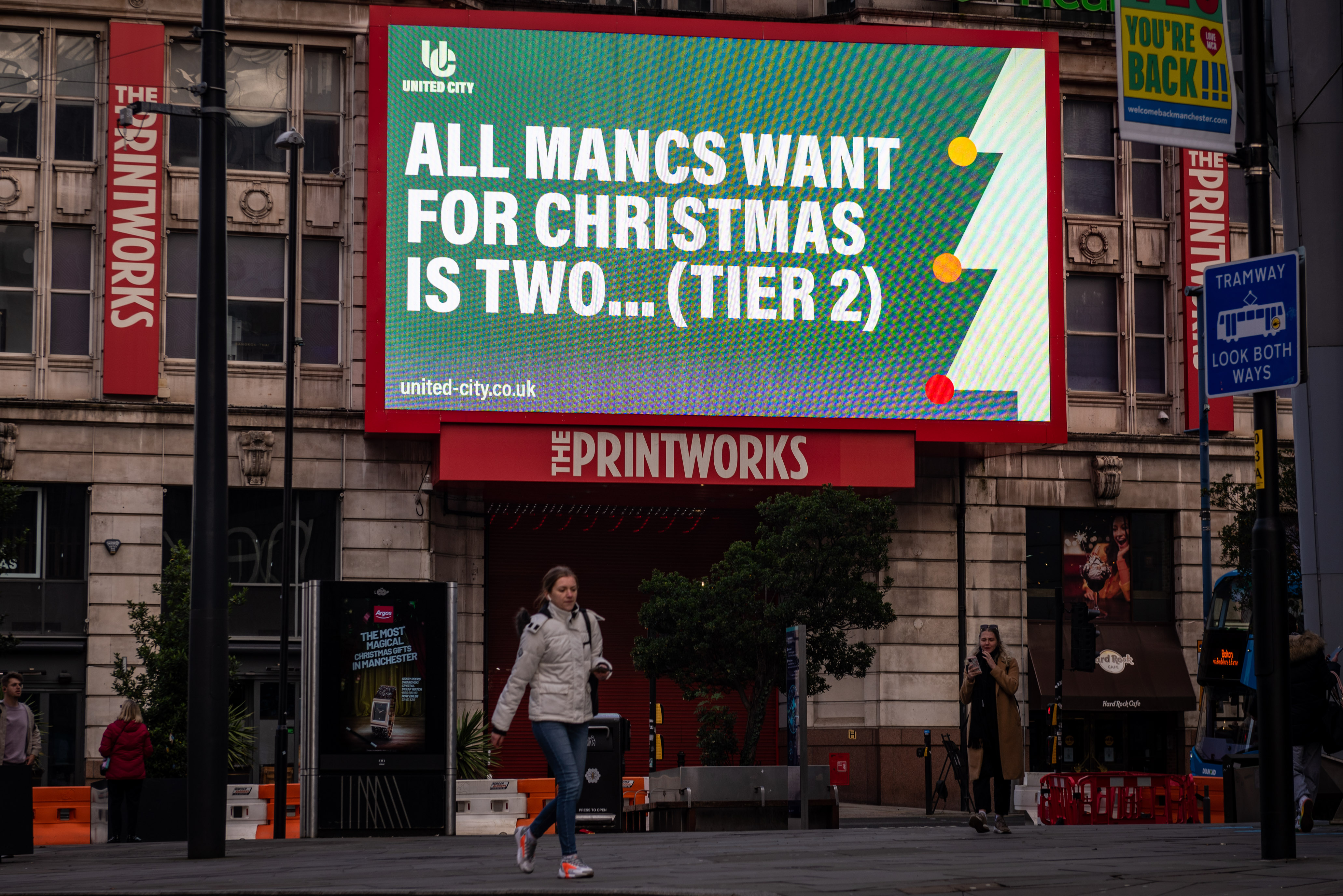 Experts have now revealed that the North may have been hit harder by the pandemic due to factors such as seasonality, employment and age.

Just a handful of areas escaped Tier 3 restrictions after driving infection rates down.

Liverpool, Cumbria, as well as Warrington and Cheshire are in Tier 2 along with the City of York and North Yorkshire.

The rest of the North is in Tier 3 restrictions and this includes areas such as Blackburn with Darwen as well as the whole of the North East.

Experts have now said that looking at both age and regional divides helps paint a picture as to why the North has been so heavily impacted.

At the start of the pandemic, London had been one of the hardest hit places, but graphs reveal that as the second wave started to take hold in September, the North was first in line to take a hit.

Data from the Office of National Statistics (ONS) shows that in the first two weeks of September only 84 new infections were found in England out of 90,000 households.

As testing continued to rise to 200,000 households per week, over a 1,000 new infections were recorded in the middle of October.

The first graph (below) shows that at the start of the second wave, there was no geographical relationship between those aged 70 or older who tested positive in the four weeks up to September 19.

The graphs shows that the North West and the North East had the highest rates – followed closely by Yorkshire and the Humber. 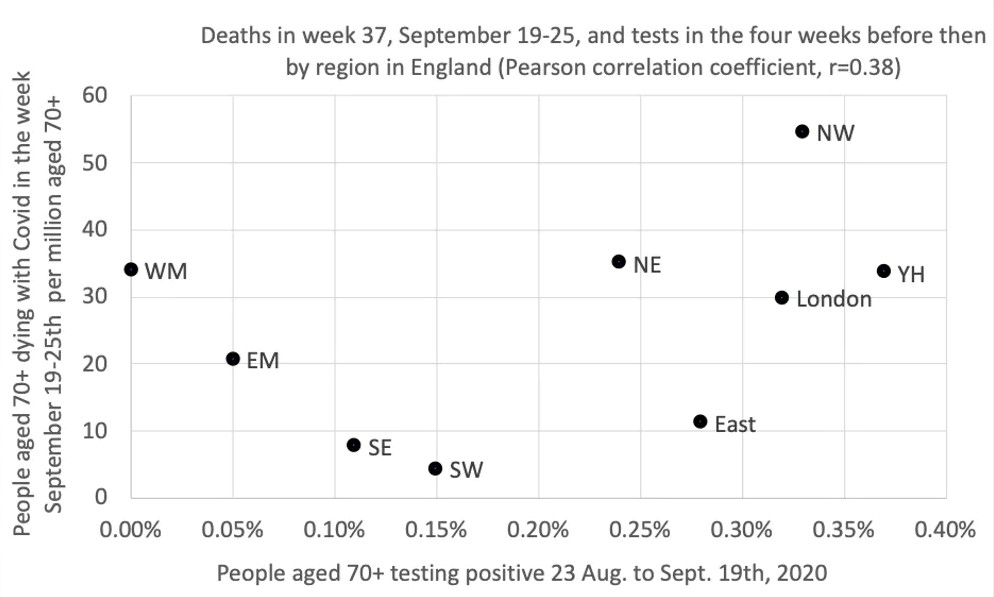 Writing in The Conversation, Professor of Geography at the University of Oxford, Danny Dorling and Professor of Clinical Epidemiology at University of Bristol George Davey Smith, said while deaths had become rare in August and September, this was a situation that changed quickly.

The experts said that just two weeks later, they were forced to update the axis on their graphs as they could no longer fit the increase in deaths and infections in the North onto the graph.

The data revealed that by October 3, cases had risen the most in the North-east of England.

This was followed by the North West and then Yorkshire and the Humber.

Deaths then rose similarly in the week beginning October 3.

WHY DID THE NORTH FARE WORSE? 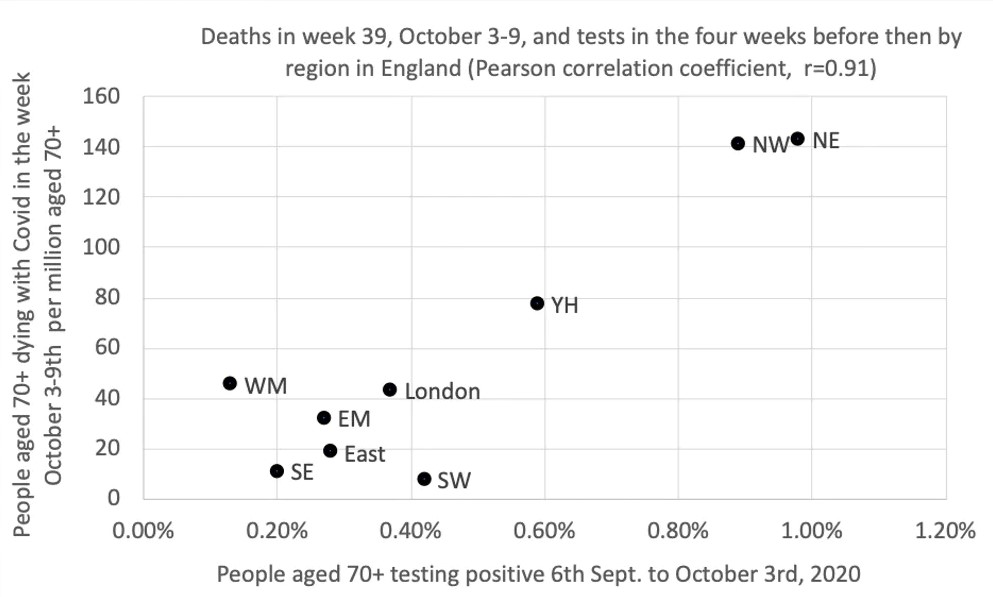 The experts stated that it was clear that infections started to rise in the North first – but this they say could be down to seasonality.

Their comments echo that of Professor Jonathan Van Tam who last night said that the virus could become seasonal, like the flu.

In August 2020 the ONS found that just 3.9 per cent of people have antibodies against Covid-19, compared to 10 per cent in London – this means that in the South – there were higher levels of immunity.

The experts added: "Covid-19 may also have spread more quickly in the North-West because there are more essential workers in these regions who cannot do their jobs from home.

"More may live nearer to their elderly relatives and rely on them for childcare, or be medically more susceptible to catching or dying from the disease."

Sun columnist Dr Zoe Williams previously discussed the North/South divide and stated that this could be due to different working patterns and the fact that there is generally more poverty in Northern regions.

Recent figures from a University of Loughborough study found the poverty rate rising fastest in the North East where a quarter of all children are living in poverty.

For example, Middlesbrough currently has 178.0 infections per 100,000 of the population – this is down from a staggering 329.1 last week data from PHE states.

Figures show the same area has 4 in 10 children there living below the breadline.

Blackburn with Darwen in the North West is also another area which has been hit hard by the pandemic.

The area currently has 297.9 cases per 100,000. Since 2010 the local council's spending power declined by a third – and the council previously stated that half of all children in the area live in poverty – while nurses are forced to use food banks.

Two weeks on from the last graph and the experts examined data from October 17 to 23 and found that there was a now a strong and strengthening geographical relationship between infections among the elderly and mortality overall.

ONS data – along with other data sets from Imperial College London and King's College also highlighted the growth in the North. 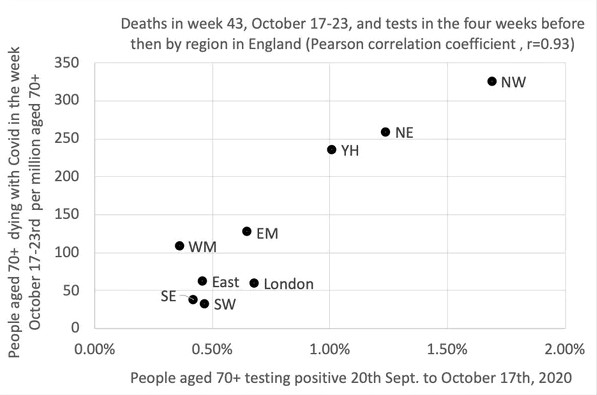 The experts statedL: "In the four weeks before October 17 (see graph above), there is still not much of a pattern between cases and subsequent deaths in more southern regions where fewer than 1 per cent of those under the age of 70 tested positive at that time.

"But the northern regions of the country showed a strengthening relationship."

As we continued into Autumn, the experts said that a pattern emerged in Northern regions.

The fourth graph, below, shows a strong correlation between prior positive tests and deaths.

The North East had fallen back slightly while the Midlands was seen to have increased.

The graph shows data from the day before the second national lockdown on November 5 – which ended this week. 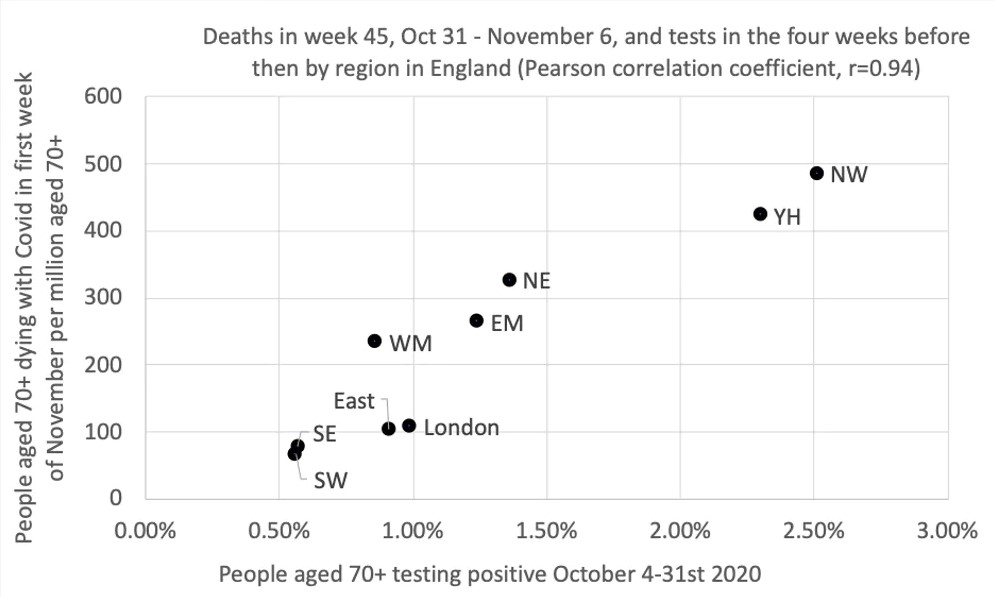 By the start of November one per cent of people aged over 70 were testing positive in a month in any region.

Around 200 per million people of that age group would die within a week of testing positive.

The experts said that this could be lower if people who are more likely to catch the disease are less likely to take part in the ONS survey.

The data also showed that infections had risen most in the north, and then in the Midlands.

The most recent data suggests deaths have fallen in the East and East Midlands as well as Yorkshire and the Humber while a plateau is emerging in the North East, the North West and London.

The experts added: "There are many reasons for why this might occur, including both a possible fall in the proportion of people who are most susceptible where the disease has already spread the most, and possibly also greater voluntary isolation of people aged over 70 as it has spread.

"But as England exits full lockdown and re-enters tiers, the full effects of colder weather are yet to come."