MARRIAGE OF THE DUKE OF WINDSOR

THE BRIDE WAS NERVOUS! 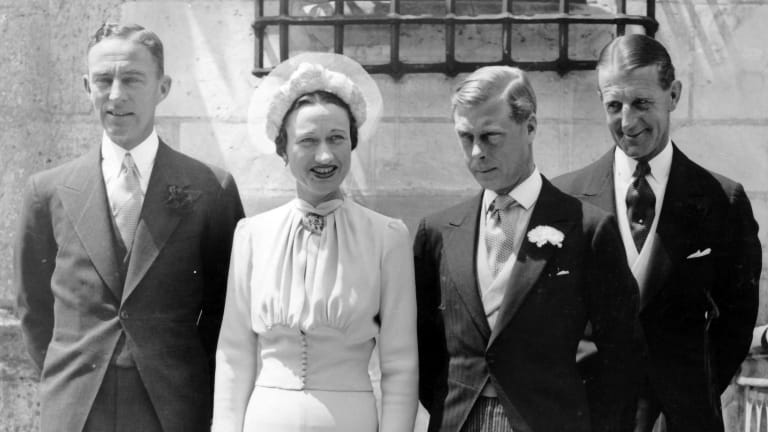 Wallis and Edward after their wedding in 1937.

The Duke of Windsor and Mrs. Warfield were married this morning.

It was a day of brilliant sunshine, and the precincts of the Chateau de Conde were thronged. The ceremony was completed three minutes before noon.

According to the “Daily Mail,” the King and Queen sent a joint wedding present to the Duke and Mrs. Warfield.

The bride’s trunks contained at least sixty of the newest Paris dresses for the honeymoon. 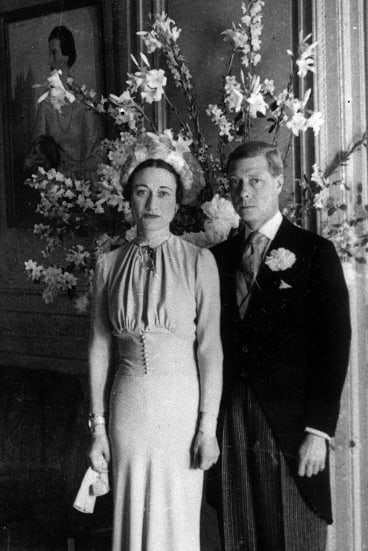 Wallis and Edward after their wedding at the Chateau de Cande.

The ceremony was performed in the green-panelled music room, the windows of which overlook the beautiful Indre Valley. The bride and bridegroom sat in arm chairs. Major Metcalfe was on the Duke’s left, and Mr. Rogers sat beside Mrs. Warfield, the other guests being seated in rows behind the couple.

It was a simple ceremony and brief – it opened at 11.35 a.m. and ended at 11.47. The mayor read the relevant articles of the civil code under which married couple promise to be faithful and help each other. The husband must protect the wife, and the wife must obey the husband, and must live with him and follow him wherever he deems fit. The husband must maintain the wife in accordance with their status.

“Most Moving Idyll of All Time.”

“By one of the chances of destiny,” Dr. Mercier then declared, “the most moving idyll of all time takes place under the blue skies of France, amid the flowers and trees of the Chateau au de Cande. I salute your Royal Highness as a former sovereign of a most friendly nation.” The mayor then explained that the wedding was held in the Chateau by special permission of the prefect of the department.

The Exchange of Vows.

Addressing the Duke, using all his Christian names and titles, including those of “Admiral of the Fleet”, “Field Marshall” and “Marshall of the Air Force of Great Britain,” he asked, “If he took Mrs. Wallis Warfield as his wife”.

Dr. Mercier repeated the question to Mrs. Warfield, who replied “Oui” in a slightly unsteady voice. 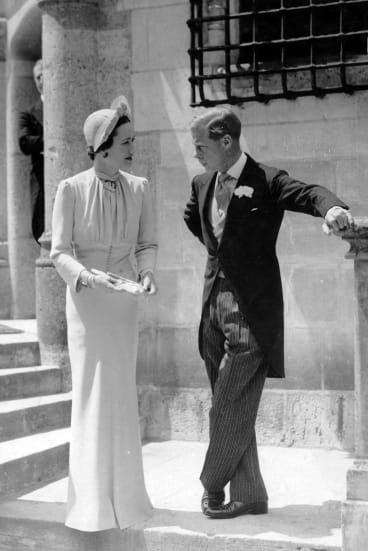 The married couple pictured outside the Chateau de Cande.

The mayor then declared: “In the name of the law, we declare you united in the bonds of matrimony.” Turning to the bride with a smile, he said, “You may now sit down”.

Dr. Mercier concluded the ceremony with a short address. He said it was fitting that this wedding should be celebrated in the ancient province of Touraine, the land of poets, great writers and intellectuals, in which the best French was spoken. Thousands of Britons and Americans knew and loved it well, and the Duke of Windsor had added fresh honor to the province by choosing it as the scene of his marriage.

The Duke smiled happily at his bride as Dr. Mercier concluded with an expression of most cordial wishes for their happiness. 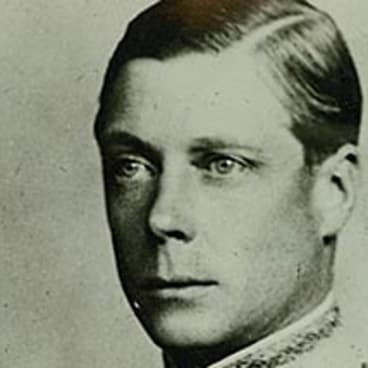 A portrait of King Edward VIII

Mrs. Warfield wore a blue-skirted cocktail dress of “Wallis Blue,” a shade between pastel and hyacinth blue, which matches the color of her eyes, and sets the tone for her trousseau of eighty dresses and forty hats. The wedding dress had a high draped neckline, and was worn with a fitted long-sleeved jacket of the same shade, wrist-length gloves of the same tone of blue, and crepe high-heeled openwork sandals of a similar shade. Her hat was a tiny skull cap of Wallis Blue straw, with a turned-back halo brim of blue tulle, the base of which was a bandeau of blue and pale pink ostrich feathers.

The Duke wore a morning suit, with a wing collar, and a white flower in the buttonhole.

With interlaced British, American and French flags decorating the houses and arches of flowers

spanning the streets, Monts was transformed into a carnival town. It is crowded with visitors, but none of them could expect more than the vicarious thrill of being in the neighbourhood of the most romantic wedding of modern times. Detachments of police took up position along all the roads leading to the chateau, two aeroplanes patrolled overhead, and observation posts well camouflaged were established in the grounds of the chateau. Thus unauthorised people had not the slightest chance of entering. The press representatives were not allowed to use the telephone or leave the chateau until the ceremony had ended. 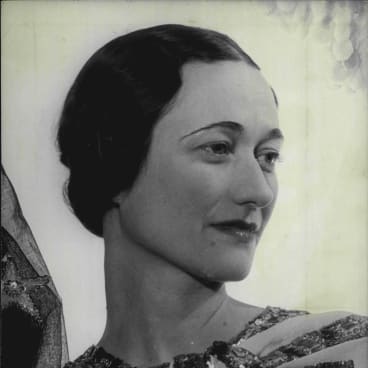 A historic portrait of the Duchess of Windsor.

The concierge of the chateau, Madame Briault, recalled the last wedding held at the chateau, in 1907. It was conducted by an archbishop, and hundreds of guests danced all night. She added sadly that there would be nothing like that today – those days were gone.

The simplicity of today’s wedding is emphasised by the fact that the mayor, Dr. Mercier, attended several patients before he set out for the chateau. He wore morning dress with a tri-colored sash.

Today will go down to posterity as one of the most important in the history of Monts. A holiday was declared to celebrate the occasion. The village musical society offered to serenade the bride and bridegroom, but the Duke replied regretting that he was unable to accept the offer. Special chars-a-banc were run from many parts of France, bringing hundreds more to join the thousands of visitors already in the district. Enormous crowds assembled in the neighbourhood of the chateau, and all vehicular traffic was prohibited within a certain radius. After the ceremony the road was blocked by gendarmes to prevent “pursuit” of the departing couple.

The “News Chronicle,” in a leading article, says: “It is no disrespect to the King and Queen to say that the thoughts of millions who were formerly subjects of the Duke will turn today to the music

room of the Chateau de Cande, where the man who was their King will bring the culmination of a romance which cost him his throne. Accompanying these though will for affection remembrance and best good wishes. Edward judged it expedient to surrender the privileges and burdens of the monarchy for the sake of the woman he loved and whom the State would not accept. No man or woman in history, perhaps, has had a harder personal or public choice to make. Today criticism should be silent. May those who would still persecute him learn soon the virtue of charity.” 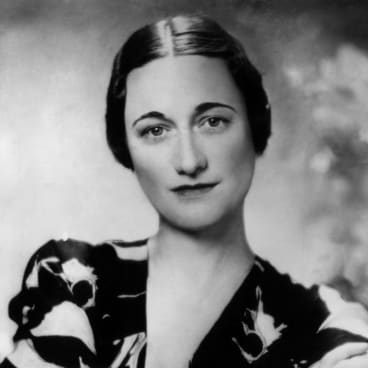 The news that Rev. Anderson Jardine, Anglican vicar of Darlington, Durham, had gone to France

to perform the religious marriage ceremony for the Duke came as a great surprise, not only to the Archbishop of Canterbury, but also to the Bishop of Fulham, under whose jurisdiction the

Anglican Church congregations in north and central Europe come. After consultation with the Archbishop of Canterbury, the Bishop of Fulham issued the following statement last night, with the authority of the Archbishop: –

“If it be true that Rev. Anderson Jardine has undertaken to perform the religious ceremony in connection with the marriage of the Duke of Windsor, the Bishop of Fulham wishes it understood that this action by an Anglican clergyman was taken without his knowledge or consent.” 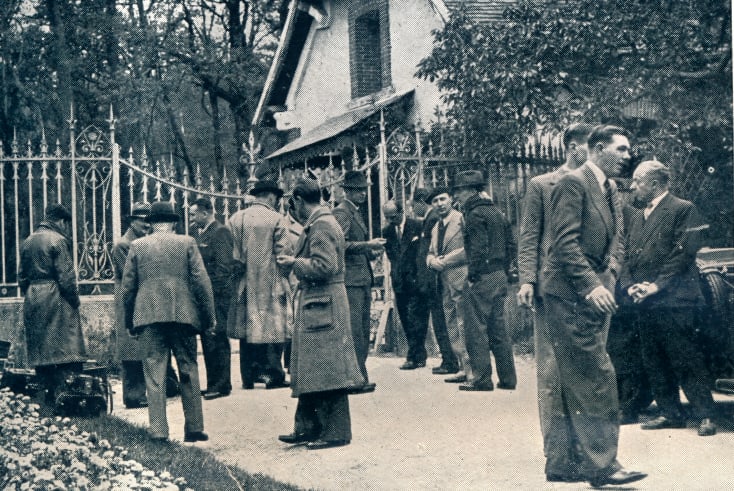 Photographers and journalists gather at the main entrance to the gates of the Chateau de Cande, the location of the wedding between Wallis Simpson and the abdicated King Edward VIII.

The Bishop of Fulham added that Mr. Jardine had no ecclesiastical standing in France and no authority to act on behalf of the Anglican Church. These protests having been registered, the matter rested there.

It is pointed out that the attitude of the Church of England to the remarriage in churches of innocent parties in divorce cases was stated by the Archbishop of Canterbury in 1935. “Marriage was a lifelong bond,” the Archbishop said, “And he thought they were right in saying that marriages of persons who had spouses living should not take place in churches.”

The Archbishop of York also declared in 1935 that marriage after divorce should not be celebrated in a church. “If we are to do that,” he added, “there must be no distinction between the innocent and the guilty.”

The Supreme Court of Judicature Act 1925 provides that no clergyman of the Church of England shall be compelled to marry the guilty party of a divorce.

The Rural Dean of France.

The “Daily Mail” correspondent at Tours says: – “Prebendary F. A. Cardew, rural dean of France, responsible to the Bishop of Fulham, says that directly he heard Rev. Jardine had come to France he telephoned the Bishop of Fulham, who explained that it had been made clear to the clergy of England that they must not take any part in the wedding. Rev. Cardew said he lent a crucifix for use at the civil ceremony, but in the changed circumstances he had requested its return, as he could not appear to countenance a ceremony disapproved of by his superior. The whole position was most embarrassing to the Duke, who was an old friend of his, but he was compelled to act in accordance with church discipline.”

The “Daily Telegraph” says: “Mr Jardine’s actions are entirely irregular. It is understood that the Bishop of Fulham has telegraphed to him, protesting against his acting without Episcopal license or consent. There is no process of ecclesiastical law by which Mr. Jardine can be restrained from doing what he or his host desires in a private house, which is not within the territorial jurisdiction of a bishop of the Church of England. It is for that reason that the Bishop of Fulham’s telegram takes the form of a protest, not prohibition. Mr Jardine’s position in the ceremony will be that of a private person who has been invited to say prayers – he is not capable of legally solemnising a marriage.” 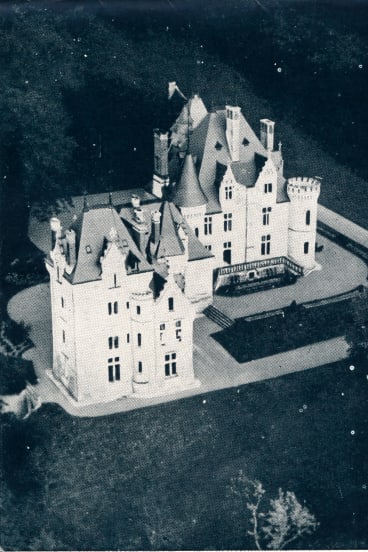 The Chateau de Cande, France. The location of the 1937 wedding between Wallis Simpson and the abdicated King Edward VIII.

The “Daily Mail” correspondent at Tours says: “According to one in close touch with the chateau, the intimate friends of the Duke are aware that he was always anxious that a minister should perform the ceremony. He has a deeper concern over matters of religion than is generally known, but he has always requested that his views in this regard should not be made public. When advised of the statement made by the Bishop of Durham – that he was not aware that Mr. Jardine was to officiate and that if the wedding were to have occurred in his own diocese he would have considered it his duty to inhibit clergymen from officiating – Mr. Jardine seemed undismayed and said he would not be deterred from performing the ceremony. When asked how he knew the Duke wished a religious ceremony and how he came to make the offer to officiate, Mr. Jardine replied: “It seemed to me unthinkable that any member of the Royal family could be married without the Church of England service.”

The “Daily Sketch” correspondent says Mr. Jardine was among the seventeen guests of the Duke at dinner at the chateau last night.