A woman who injured two police officers by hitting them with her car at a McDonald’s drive-through before leading other officers on a high-speed pursuit through Melbourne’s south-eastern suburbs has been sentenced to more than five years in jail.

Staff at the Seaford fast food outlet called police when Courtney Pollard appeared drug affected and sat slumped at the steering wheel of her Ford Focus after placing an order on December 29, 2020. 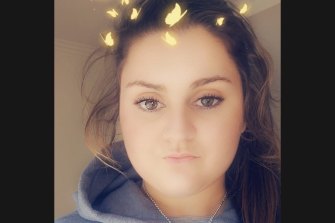 Courtney Pollard has been jailed for five years and four months.Credit:Facebook

But when police arrived, Pollard jolted alert, refused to get out and rammed the divvy van in front of her. Then she reversed, pinning one officer against a brick wall, before accelerating forward and running over a policewoman’s leg.

Pollard then drove from the outlet, and over the next 50 minutes, the County Court heard on Thursday, sped erratically through nearby suburbs while pursued by police vehicles and tracked by their helicopter.

During the pursuit Pollard repeatedly sped on the wrong side of the road, went through red lights, drove along nature strips, forced other motorists to swerve out of the way and was at one stage clocked at 170km/h.

Judge Gavan Meredith said Pollard continued driving even after police used road spikes to blow out her front tyre in Springvale, and after she collided with a Holden Commodore in Clayton. She eventually crashed into a tree in Burwood, 37 kilometres from Seaford. 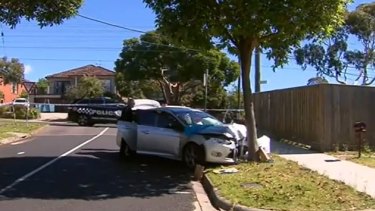 Courtney Pollard crashed her car into a tree in this Burwood street.Credit:Nine News

Pollard, 29, who has a long history of drug use and road offending, was on Thursday jailed for five years and four months after pleading guilty to 17 charges, including reckless conduct endangering life, intentionally exposing emergency workers to risk by driving and recklessly causing serious injury to an emergency services worker. 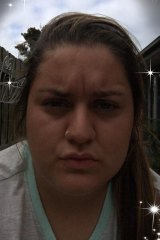 Courtney Pollard has a history of drug and driving offending.

Some of the offences she faced carry mandatory jail terms. She must serve three years before she is eligible for parole.

The officer who was pinned to the wall suffered injuries to the calf muscles in both legs, while the policewoman suffered a fractured ankle. Both are now back at work, but the judge said it was only “good fortune” their injuries weren’t more serious.

“Yours was a highly dangerous and prolonged escapade,” Meredith told Pollard, who appeared on a video link from prison.

“The risk of harm to others as a result of your driving was high.

“The seriousness of your offensive conduct is underpinned by your excessive speed, running red lights, driving on the wrong side of the road and causing other road users to take evasive action.”

Police found a quantity of the party drug 1,4-Butanediol in Pollard’s car, and the court heard drugs had long been the scourge of her life.

She grew up in a dysfunctional home where her parents abused drugs and alcohol. Her father was violent, and she began using cannabis at age 12. She later turned to GHB and ice.

Pollard was previously in road crashes where she was affected by GHB, Meredith said, and suffered leg, hip and pelvis injuries in a motorcycle crash where she was the passenger and the rider was drug-affected.

But the judge said there wasn’t enough evidence to connect her mental health problems to her offending. He ruled Pollard would have known of the risk she posed to the police at the McDonald’s.

Pollard is now drug-free in prison, the court heard. While encouraged by that, the judge said he could only be “cautiously optimistic” about her long-term prospects of rehabilitation.

He also fined Pollard $1000, disqualified her licence for two years and ordered she pay more than $10,000 to cover the repairs to the divvy van and the Commodore.

Pollard has already served half her non-parole period.