Like everything to do with Britain's royal family, a mix of tradition and modernity governed the birth of Prince William and Kate's third child. Here are five things to know about Britain's royal births. 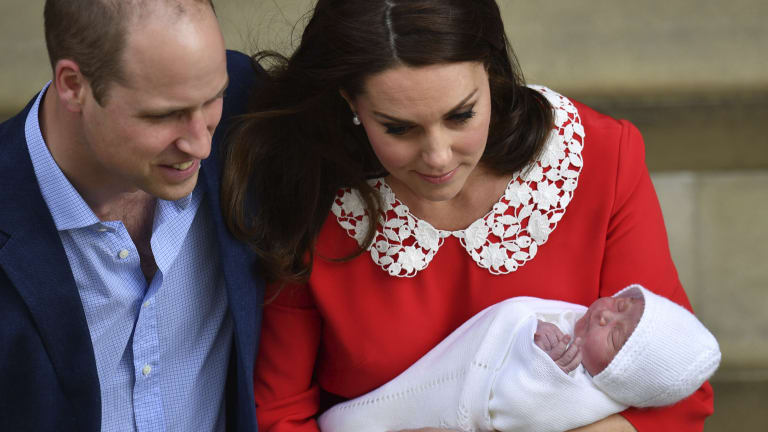 William was at his wife’s side for the birth of all three of their children at the private Lindo Wing of St. Mary’s Hospital in London.

That changed by the 1980s, when Princess Diana had sons William and Harry at the private Lindo Wing of St. Mary's Hospital in London. William and Kate's first two children, George and Charlotte, were born at the same hospital in 2013 and 2015. Kate gave birth to their third child, a son, there on Monday.

For decades, and for reasons that remain unclear, custom dictated that government officials should be present when a royal was born. Some believe it was to verify that there was no switching at birth or other shenanigans.

When the queen was born in 1926, Britain's home secretary was present among the doctors. The custom was eliminated before the birth of the queen's first child, Prince Charles, in 1948.

Until recently, it was not usual for fathers to attend births. However, Prince Charles was present when sons William and Harry were born, and William was at his wife's side for the birth of their first two children. He was in attendance again on Monday for the birth of baby number three. 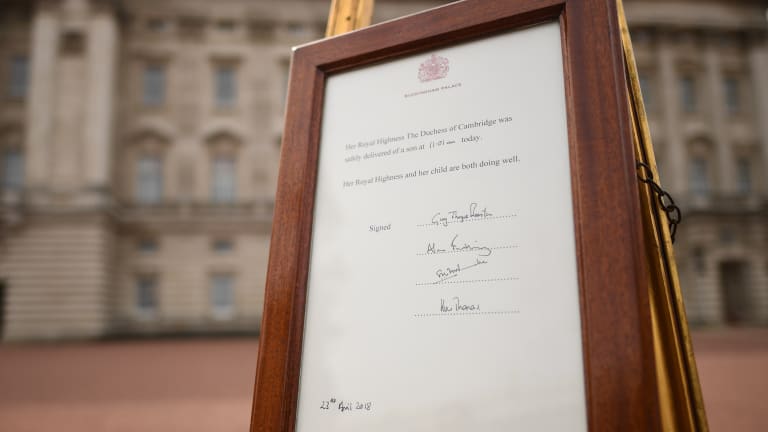 A notice is placed on an easel announcing the birth of the new Royal baby, in the forecourt of Buckingham Palace.

News of the newborn prince's birth was announced by Kensington Palace by email and on Twitter, but it also involved a tradition dating back at least to the 19th century.

A messenger travelled by car from the hospital to Buckingham Palace, carrying a piece of paper signed by doctors detailing the infant's gender, weight and time of birth.

Two uniformed palace staff placed the framed notice on a ceremonial easel in the palace forecourt, where it will stay for about 24 hours. 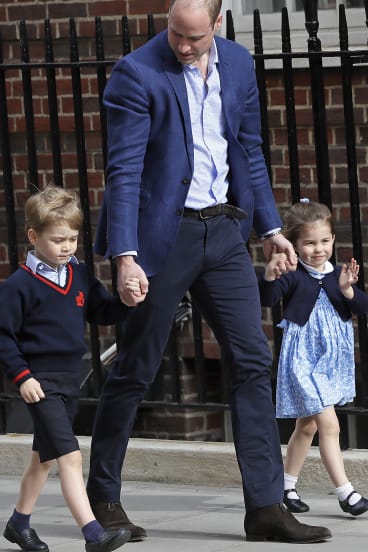 The names of George and Charlotte were announced within two days of their births.

The name of the new prince has not been announced; the palace says it will be revealed "in due course."

When William was born, it took a full week before his name was announced, but the names of George and Charlotte were announced within two days of their births.

Arthur, James and Albert are among bookmakers' favourites, and there is speculation the baby might be given Philip as a middle name in honour of his great-grandfather Prince Philip.

Most royals have three to four first names, usually in a combination that honours previous monarchs or relatives. William and Kate's firstborn is named George Alexander Louis and his sister is Charlotte Elizabeth Diana – honouring both her great-grandmother Queen Elizabeth II and her late grandmother, Princess Diana.

The baby's full title will be His Royal Highness Prince (Name) of Cambridge. 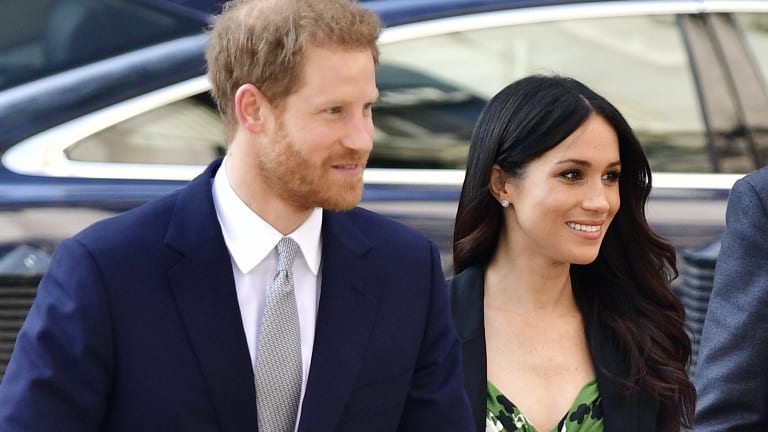 Prince Harry has been bumped down to sixth-in-line for the throne with the birth of his new nephew.

Until recently, the rules of succession favoured male heirs, so a younger brother would jump ahead of an elder sister in the line for the throne. But the rules were changed before Prince George was born to give royal daughters the same rights as sons.

That means Princess Charlotte remains fourth in line to the throne, with the new baby fifth. William's younger brother, Prince Harry, drops down to sixth place. 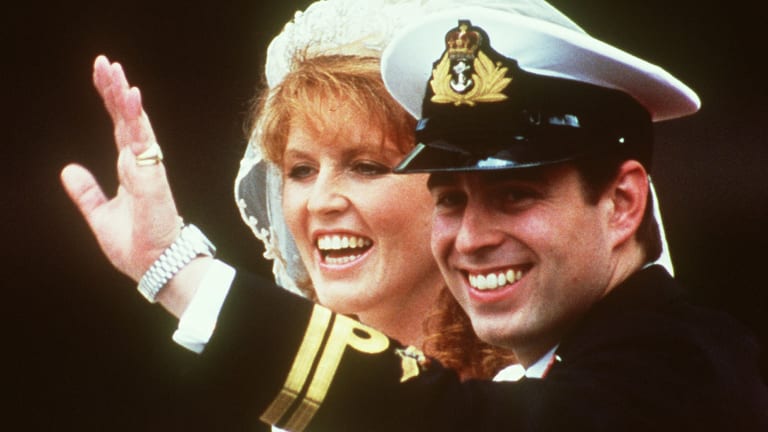 The Duke and Duchess of York – who married in 1986 and divorced in 1996 – could now remarry without the Queen’s permission.

That drops Prince Andrew, the Duke of York, to seventh-in-line, meaning he no longer needs his mother's permission to marry, or re-marry, according to the Royal Marriages Act, which requires the first six heirs to the throne to have the Queen's consent.

This could fuel rumours about a reunion of the Duke and Duchess of York, Sarah Ferguson.