Father of man, 21, shot dead in Manchester double-murder blasts the fugitive gunman for ‘hiding like a rat’ as victim’s mother says their lives have been ‘shredded to pieces’

The grieving father of young man who was shot dead as part of a shocking double murder at a Moss Side lockdown party has slammed the fugitive gunman who is ‘hiding like a rat’ while his mother says their lives ‘have been shredded into pieces’.

A gunman shot Cheriff Tall, 21, and Abayomi Ajose, 36, in the head at a rowdy lockdown party in a car park off Caythorpe Street in Manchester just before 1am on June 21.

As the police hunt for the culprit intensifies, on Tuesday the families of both victims spoke movingly about the loss of their loved ones and made public appeals for some of the 300 people at the event to come forward.

So far police haven’t identified an eye-witness who is prepared to give evidence.

The father of Cheriff Tall, from a large family in Senegal and Gambia including diplomats, spoke directly to the shooter at a media press conference.

The victim had ambitions to join the army or become a pilot. 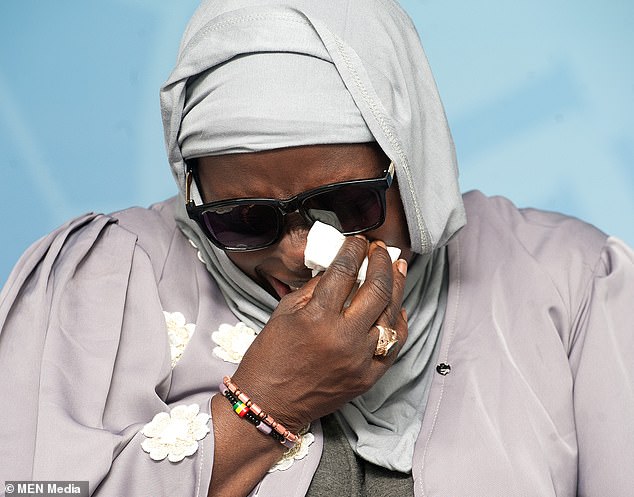 Pictured: Suwaidu Sanyang, 53, the mother of Cheriff Tall who was shot and killed in Manchester at a lockdown party, cries as she addresses her son’s killer in a press conference

Mousa Tall, 53, a support worker, said the gunman was ‘in hiding like a rat’. He said they had come from behind his son to shoot him.

‘We are Muslims. We trust Allah. We know Allah knows him, he saw him. He’s waiting. There’s a verse they say in the Quran: every soul shall taste death, whoever you are and wherever you are. 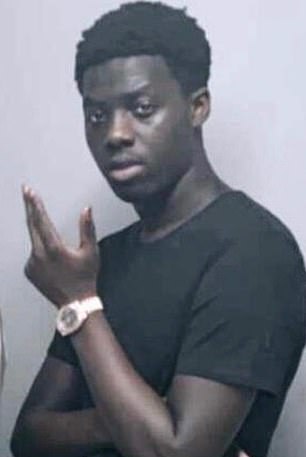 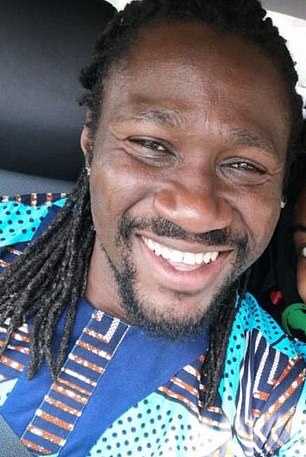 ‘You killed two people for no reason. You were so big to kill them. But today you are so little because you are hiding.

Cheriff had been singing and dancing at home that day, anticipating a ‘community barbecue’, say his family.

His mother Suwaidu said: ‘He was so happy. He showed me a photo of how he was gonna dress. He was “look this is how I’m gonna dress”. I said “oh that’s lovely you’re gonna look nice”.

‘And then he said to me “jump into the taxi and I drop you off at your friend’s house”. I said “are you mad? It’s just walking distance, let me go by myself”. He said “no get into the taxi with me”.’

She added: ‘Of all the children, he was the one who would hug and kiss me every minute every time. He said “mum are you alright?” and give me a kiss on the head.’

Sarata broke down in tears when she said: ‘No parent should ever have to be burying their son who they’ve raised up to the tender age of 21 to the senseless act of violence. Lives have been shredded into pieces by this tragic event. And it’s not just us. It’s two families whose lives have been torn apart.’

‘Cheriff enjoyed being around his family. He enjoyed playing football games, playing video games and playing in the house with his little nephew. He also loved listening to music and enjoyed singing and dancing. He also enjoyed going out, he was just like an average normal boy.’ 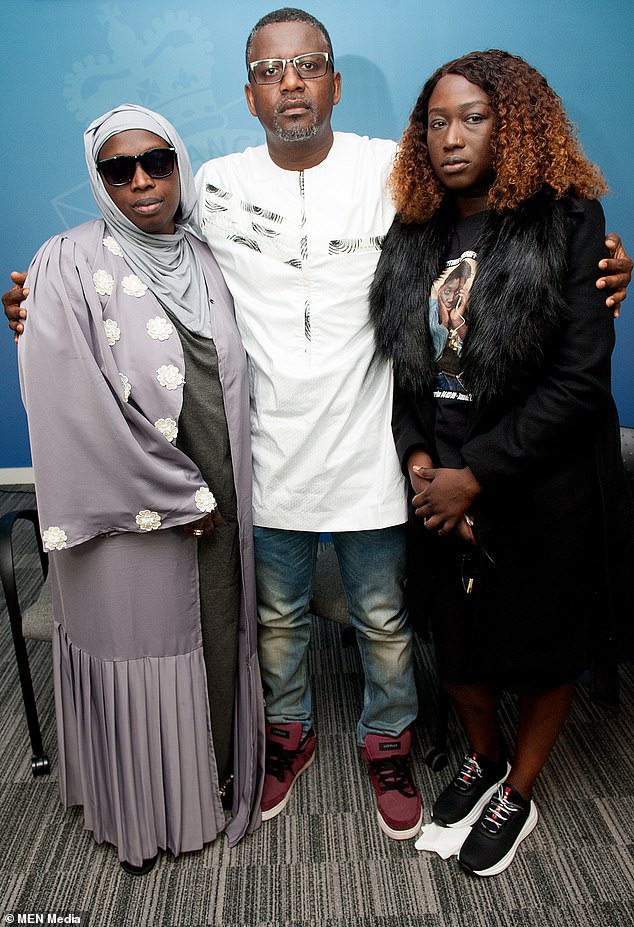 ‘Even when his friends, they are in trouble Cheriff always try to help them. This trouble is nothing to do with him. He always wanted to help his friends. He’s a very helpful guy. Cheriff loved also back home. He wanted always to go to Africa to see his family there but we are a very, very big family.

‘His grandpa, he was a diplomat from the Gambian government. He was a minister. Both his grandpas, they were diplomats in the Gambian and Senagalese governments. He wasn’t like an ordinary child. He got a very strong background.’

Sorata said her brother had been at the community event earlier that day, although she accepted the party that night breached lockdown rules.

She said: ‘The event itself was a planned community event in the afternoon. The only thing that was a breach was how the party continued later on. But this is what you expect when young people have a party.

‘It’s a very normal thing to happen. When they do start enjoying themselves, it continues sometimes into the evening and into the night.’ 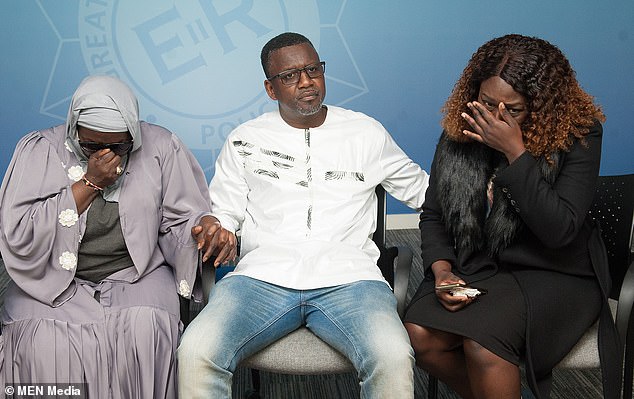 Pictured: Cheriff’s mother Suwaidu Sanyang, 53 (left) and sister Sarata Sambou, 34 (right) sobbed as he addressed the person who killed their son during a Greater Manchester Police press conference at the police’s headquarters

Cousins who were also at the party described how Cheriff was ‘jumping and dancing and so happy’ at the event, according to his father.

Abayomi’s wife Lola Ajose, with whom he had three children, described him as ‘just a fun guy and the life of the party – when you think of him you just smile’.

‘He was just a really fun guy and hard-working guy and dedicated to looking after the family. He was a very good dad,’ she said.

She said what happens ‘doesn’t feel real’. He had a ‘gift of working with the naughty kids’ as a support worker, she said. ‘We’re all just shocked,’ she said.

He was ‘like a counsellor’ to people in the community. His brother-in-law Olalekan Oyekanmi said: ‘He’s going to be deeply missed. It’s not really sunk in. On that fateful night I’d just seen him and it doesn’t feel real. Even at home the day after it was just such a weird situation to be in.’