‘It is absolutely terrifying how quickly it can all happen’: Hero farmer reveals how he took fight against wildfires into his own hands by ploughing through crops after seeing smoke billowing from neighbour’s field

A hero farmer has revealed how he battled an ‘absolutely terrifying’ wildfire by ploughing through crops after seeing smoke billowing from his neighbour’s field.

Bill Alexander stepped in ‘without hesitation’ after an inferno began to spread across almost 20 acres of land at Lenham Heath, between Maidstone and Ashford, in Kent just before 3.15pm on Saturday.

Footage showed the green cultivator just yards away from the huge wildfire as Mr Alexander, wearing shorts, fearlessly drove the vehicle around the towering smoke and flames.

His heroic actions helped firefighters stop the ferocious blaze from spreading further to nearby homes and neighbouring fields filled with crops.

Mr Alexander and Andy Barr, who owns the Kent farm, appeared on ITV’s This Morning to discuss the ‘huge flames’.

Describing the moment his neighbour jumped to the rescue, Mr Barr said: ‘I was actually working in a barn in the middle of the afternoon and I got a call from another one of my neighbours saying “what is all that smoke?”.

‘I thought “what smoke?”, and I went outside and looked down over the farm and there was huge billows of it coming up from a field nearly a mile away and thought “oh my god”.

‘I quickly phoned the fire brigade and guided them in, then on the way down to the fire, Bill phoned me up and said “I can see what is happening, is there anything you want me to do?” 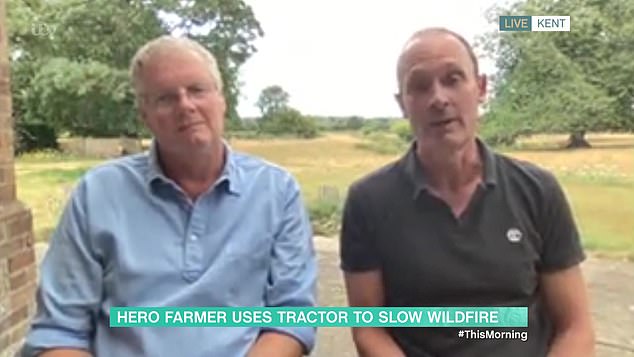 Hero farmer Bill Alexander (left) and Andy Barr (right), who owns the Kent farm, appeared on ITV’s This Morning to discuss the incident 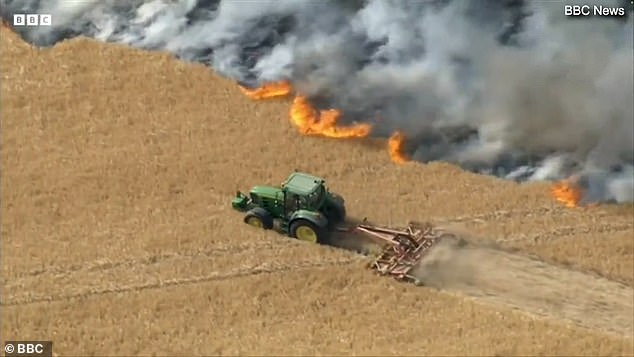 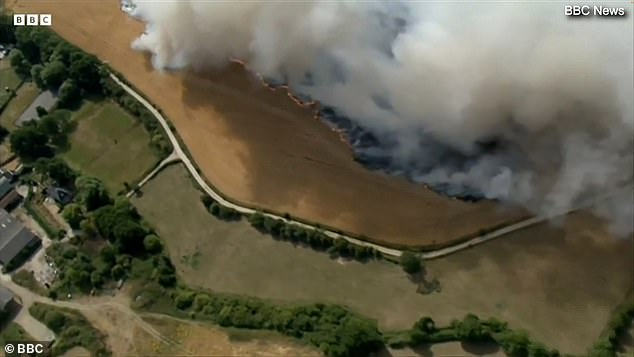 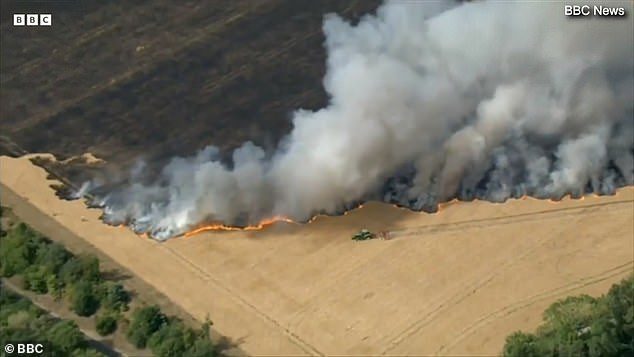 Mr Barr, who owns the farm in Kent, said he was working in a barn when he walked outside to see smoke billowing over the area

‘I knew I had to move some cattle out the way and open lots of gates, so I said “you know what, Bill, it would be really handy if we could have a cultivator down here”.

‘Without hesitation, he said “I’ll be there as soon as I can”.’

Mr Alexander said he called on his experience as a farmer to prevent the blaze from spreading.

He added: ‘I knew I had to put something between the fire and the further crop or houses the other side, so putting a cultivator through there seemed to be the best option just to mix some soil with the standing crop.

‘It was warm, it was noisy. it was smoky. I am old enough to have been around when we were still allowed to burn stubble.

‘I knew at that point we had to put fire breaks in before we could set fire to the fields, so I’ve been there before many years ago when we were allowed to do it and have seen it before.’

He continued: ‘It is absolutely terrifying how quickly it can all happen.’

The hero farmer also praised firefighters for their actions battling the blaze in full kit, while he was sat in the tractor wearing a pair of shorts.

He said: ‘You see my tractor going past the flames, but you don’t see the dozens of firefighters who were out with backpacks and hoses putting it out by hand.

‘I was in an air-conditioned cab with a pair of shorts and was quite cool. They are there in full firefighting gear in the high temperatures.’

Mr Barr paid tribute to his neighbour, too, before admitting he may have to later apologise for the publicity he has now exposed him to.

He said: ‘It is just me on the farm now. I haven’t got anyone working for me and it is really good to know you have people like Bill and the others I mentioned who just step in and help you when something like this happens.

‘It’s a good feeling and I keep saying thank you to him – I am going to have to apologise to him now for all the publicity he is getting.’

The blaze was eventually put out after 90 minutes and local residents close by were also escorted to safety. It is not yet known what caused the inferno. 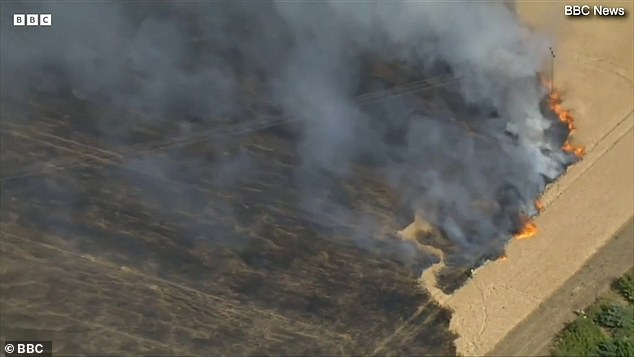 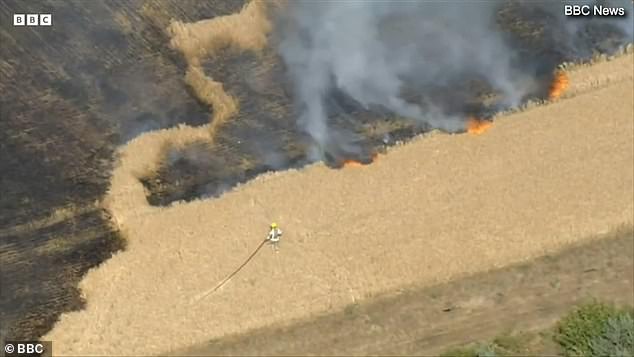 A spokesperson for the fire service service said: ‘We were sent to reports of a standing crop fire in fields on Lenham Heath.

‘Crews worked hard to get the fire under control which covered approximately eight hectares, the equivalent of almost 20 acres.

The fire has been brought under control and put out. Firefighters escorted persons who were in the vicinity to safety. There are no reports of any injuries.’

The blaze came a day before a further four Four wildfires broke out in and around London, sending smoke across the capital and onto the runway at Heathrow Airport on Sunday afternoon.

Residents reported smoke in the air more than 30 miles from Hankley Common in Elstead, where scrubland was ablaze.