Parents in Melbourne could be forced to start paying full childcare fees again from October 15 despite the state’s lockdown restrictions prohibiting most children from attending.

On Friday morning, Chief Medical Officer Paul Kelly announced a last-minute, one-week extension to the state’s COVID-19 hotspot status, which was due to expire today.

Some childcare operators had already emailed families, warning them they would resume charging gap fees that were waived by the federal government during lockdown, because Melbourne was classified a hotspot.

Professor Kelly warned the “continued occurrence of cases in the community, and movement of active cases poses an exposure risk to people in these areas”, on a day when the state recorded its highest total number of infections for a single day during the pandemic – 1838 infections. 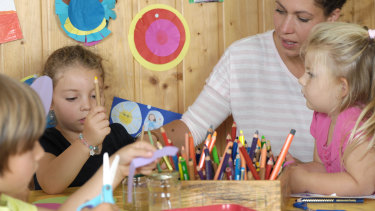 Parents will be charged full childcare fees once Victoria is no longer classified a hotspot by the federal government. Credit:Alamy

In an email to parents before the hotspot extension was announced, Guardian chief executive Warren Bright apologised for the short notice.

“We only became aware of this situation late last week and have been actively petitioning the federal government to align the hotspot declarations with the state government decisions about fully re-opening early learning centres,” he said.

John Cherry, head of advocacy at Goodstart, Australia’s largest not-for-profit early learning provider, said his organisation would take the issue up with the federal government, and would continue to waive gap fees in the meantime. But he said some providers would not be able to afford to do this.

“A lot of providers who are financially exhausted, because COVID has just cost so much money for so many people, would probably stop waiving gap fees if they weren’t receiving the business continuity payment,” Mr Cherry said.

Victoria’s lockdown restrictions prohibit parents from using childcare services unless the parent is an essential worker, a single parent who is working or the child is vulnerable.

Ruth Harper, co-ordinator at East West Childcare in Fitzroy, said, under these restrictions, centres were not allowed to accept more children until October 26, and even then both parents or guardians of the child must be fully-vaccinated.

“This just puts centres in another hard position,” she said.

“We have so many childcare centres closing due to having cases at the moment,” she said.

“I didn’t think anything like this would come about until we hit the vaccination targets.

“If parents are being charged full price they’ll want [their child] to come in. All the kids will come back to the service and increase the chances of COVID coming into a centre.”

But Georgie Dent, of parent advocacy group The Parenthood, said many Victorian parents also had a legitimate desire to keep their young children at home, and they should not be forced to pay childcare fees.

“The exposure site list is riddled with early learning centres, the state has just recorded a national high in daily cases,” she said.

“Parents deserve better than uncertainty about whether they will have to pay for a service they cannot and do not want to use while parts of the state are in lockdown.”

Ms Dent said Victorian parents were buckling under the pressure.

“They’re attempting the impossible task of working from home with young children in the house, on top of remote learning,” she said.

“The idea that they would have to fork out fees for a service they cannot use is incredibly insulting.”

Helen Gibbons, director of early education and care for the United Workers Union, said the move put the sector and families in an untenable position.

“I don’t understand why they’re making this decision. It has come as a surprise to the sector,” she said.

“It’s unacceptable for families to be put in this awful position, and it threatens educators’ jobs because they may face an exodus from the centre.”