FAMILIES have been left furious after a pub has banned all children under 12 to stop the boozer from "turning into a creche". 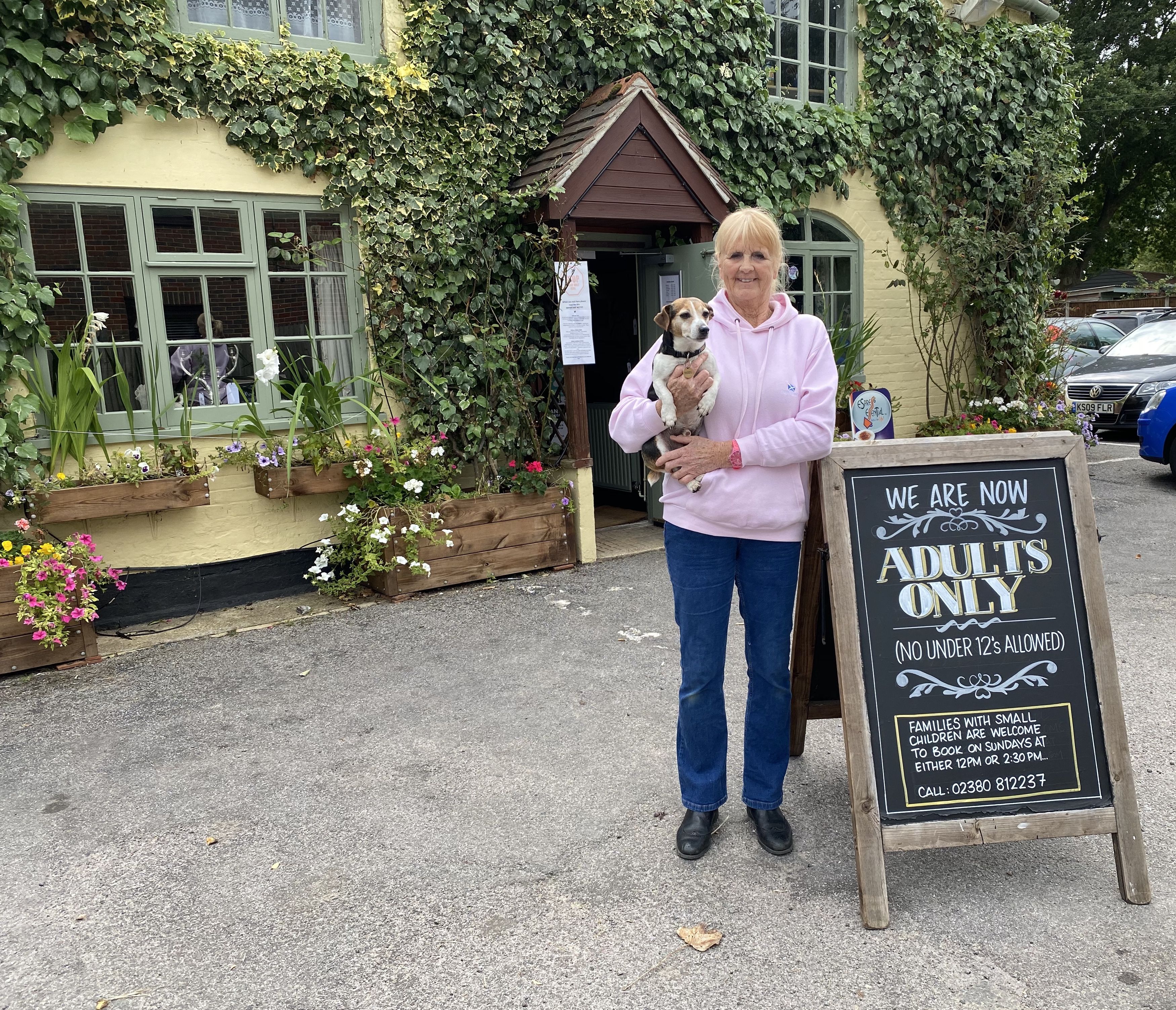 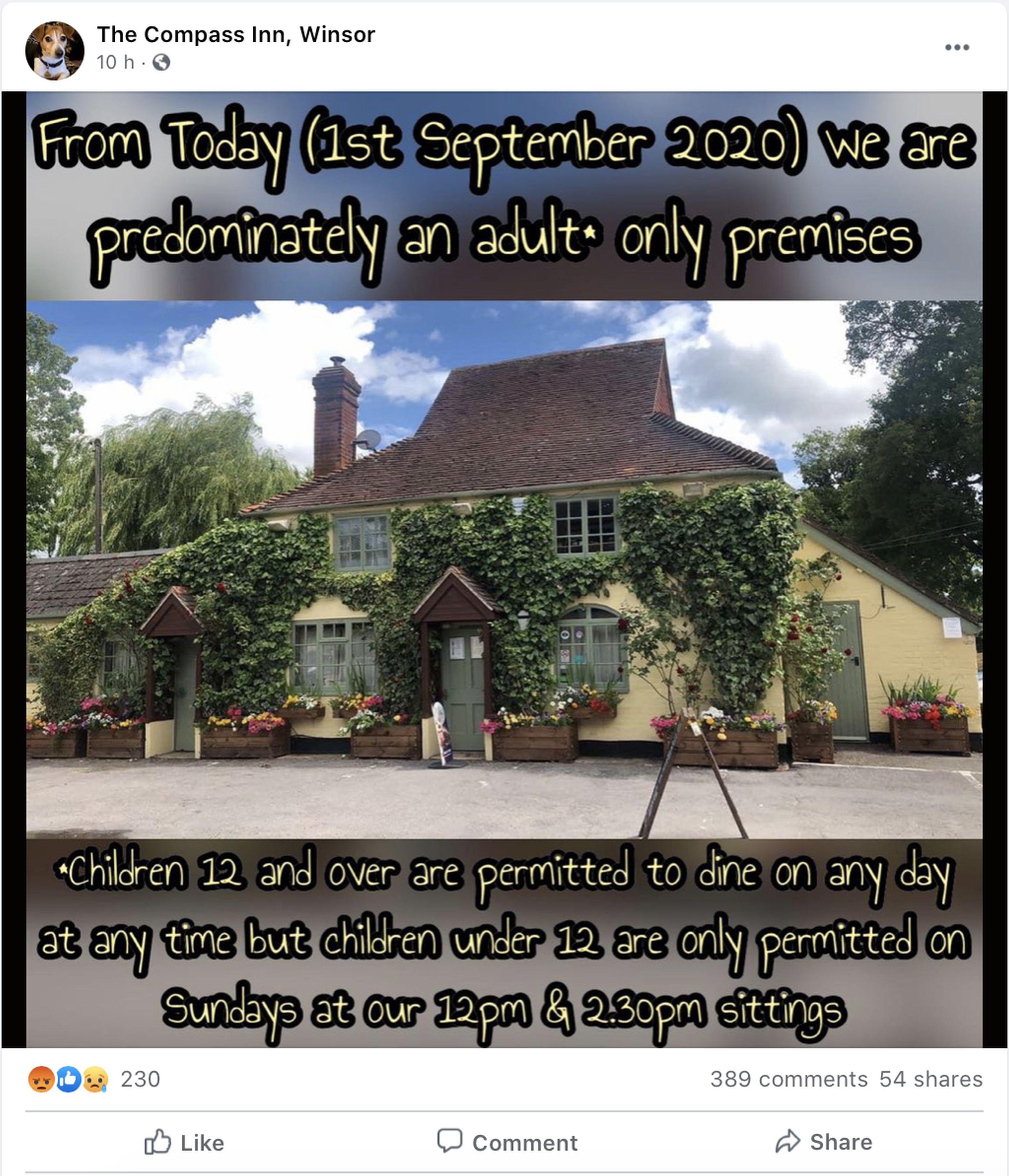 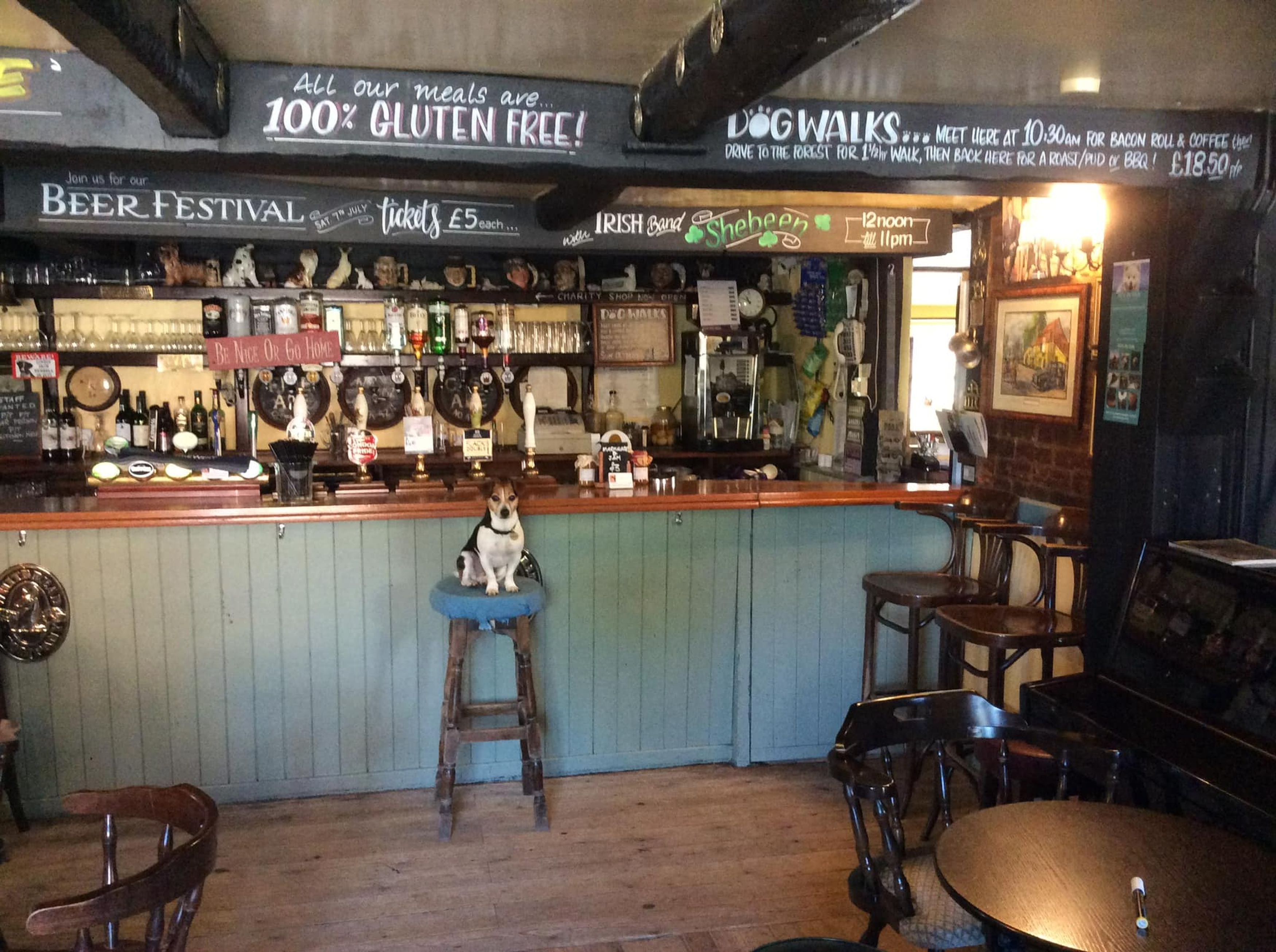 She banned youngsters from coming into the Southampton pub except during Sunday lunchtime.

Hundreds of parents have now branded the policy as "inconsiderate" and "ridiculous" online as they've vowed to take their business somewhere else.

However, opinion was divided as some customers defended Lucy's decision saying adults can finally have "a relaxing meal".

Lucy, 67, had said her pub is an "adult environment" and that she's "had enough" of kids misbehaving and ignoring social distancing rules.

As of yesterday, families with children are only allowed into the pub at 12pm and 2.30pm on Sundays and she insists doesn't plan on reversing her ban when the pandemic eases.

Lucy said: "It's their parents' fault. They just don't discipline them, so 75 per cent of the children that come in now, they're screaming and running around and not sitting at tables.

"Families will come in here around 5 o'clock after their children have been in the park all day long and they're hyper. They should be taken home to bed.

"The other day I had to move two tables out of one of our rooms because there was a family in there with four children and they couldn't hear themselves think.

This pub is an adult environment. It shouldn't be a children's creche and most of my regulars are there every day or two to three times per week just for a quiet drink or meal

"It's a great shame I've had to do it for some people, because we get quite a few nice children that have the allergy and I feel sorry for them.

"Especially with Covid now, everyone has to be seated in the pub, but they're not, and that's just brought it to a head and I've had enough."

Lucy, who has been a landlady for 25 years, she's even had Tripadviser reviews from disgruntled customers who complained they had to leave due to poorly behaved kids.

The pub, which employs 12 staff, has three small rooms and can seat up to 35 people, with an extra 35 seats in the garden area.

The viral post said: "From today, September 1, we are predominantly an adult-only premises.

"Children over 12 are permitted to dine on any date at any time, but children under 12 are only permitted at our 12pm and 2.30pm sittings."

"We’ve been regular customers for the past few years and only visited last week with my well behaved seven-year-old who sat nicely, didn’t run around, said please and thank you to the staff, and said thank you and goodbye when we left.

Philippa Murrell added: "I have always recommended this pub for the excellent food. I’m completely shocked at your stuffy arrogance to make this decision.

"Not even a u turn on your decision would make me want to return now."

The Compass Inn has been 100 per cent gluten-free for the past five years and Lucy has had a gluten intolerance for the past 30 years.

In response to the criticism, she claims she faced similar complaints in the past but thinks parents should take their boisterous kids to a more suitable pub in future, while gluten intolerant kids can visit on Sundays.

Lucy said: "We've had a lot of reviews saying 'she's not child-friendly', 'she won't let children be children', well no they shouldn't be children in the pub.

"This pub is an adult environment. It shouldn't be a children's creche and most of my regulars are there every day or two to three times per week just for a quiet drink or meal."

She added:"I understand that we're number one for gluten-free in the area, but I have made sure there's a time for families to come on a Sunday and I hope they do still come in."

Some defended her decision on Facebook, claiming it was a good move for the pub to demand some much-needed peace and quiet.

Alison Bridge said: "The compass is a traditional pub and it's lovely to have somewhere that adults can have a relaxing meal.

"There are so many family pubs that welcome children and GF is being catered for widely now. Not everyone wants to go to a pub with children. It's nice to have somewhere relaxing to go."

Sabrina Lianne Harris said: "Good move, any locals will know you're full with adults so it's not like this is going to affect your business.

"We need more mostly adults only places, it's nice to know poorly behaved kids won't be ruining our meal. Especially with covid, where they go from annoying to potentially dangerous." 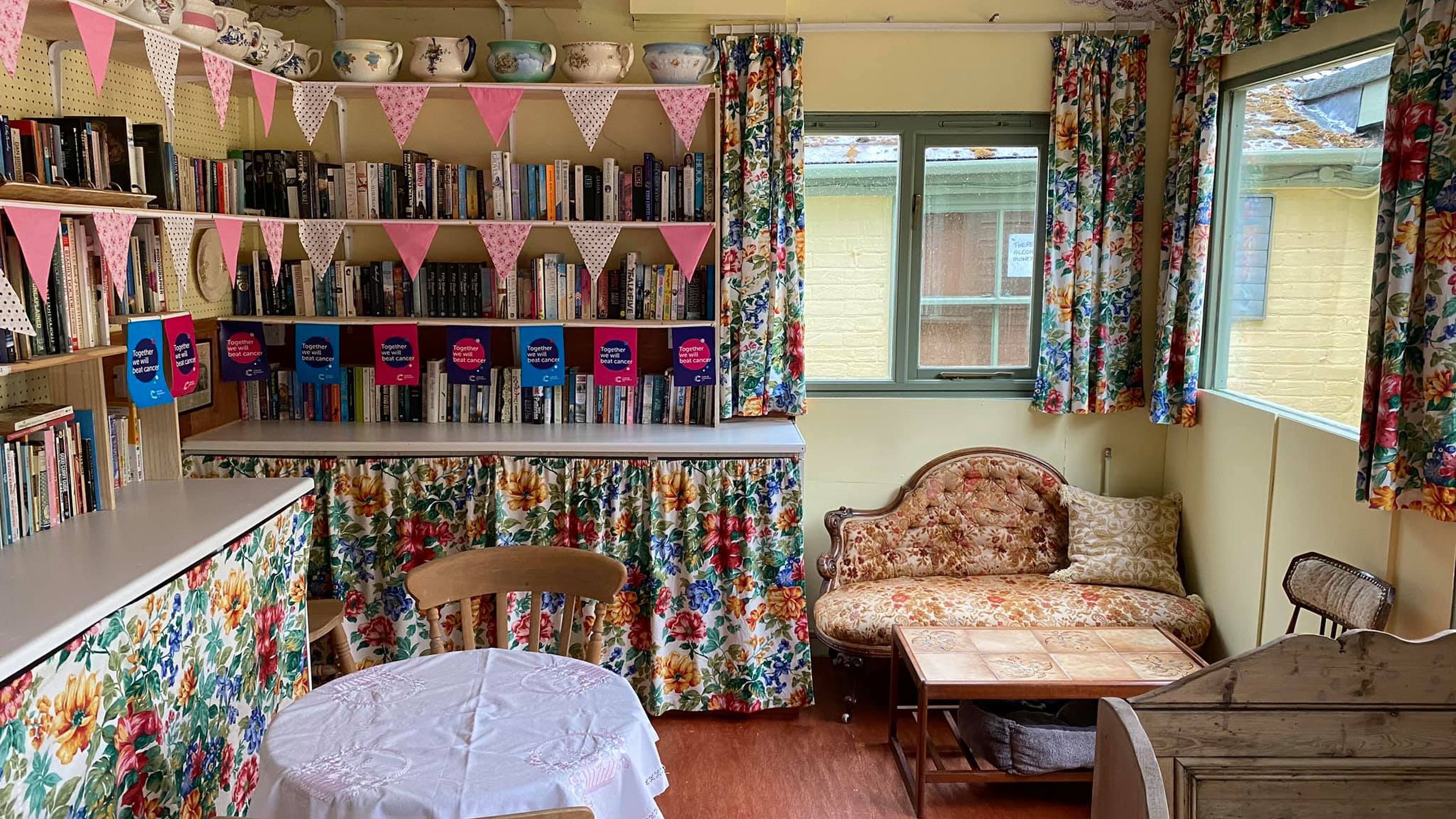 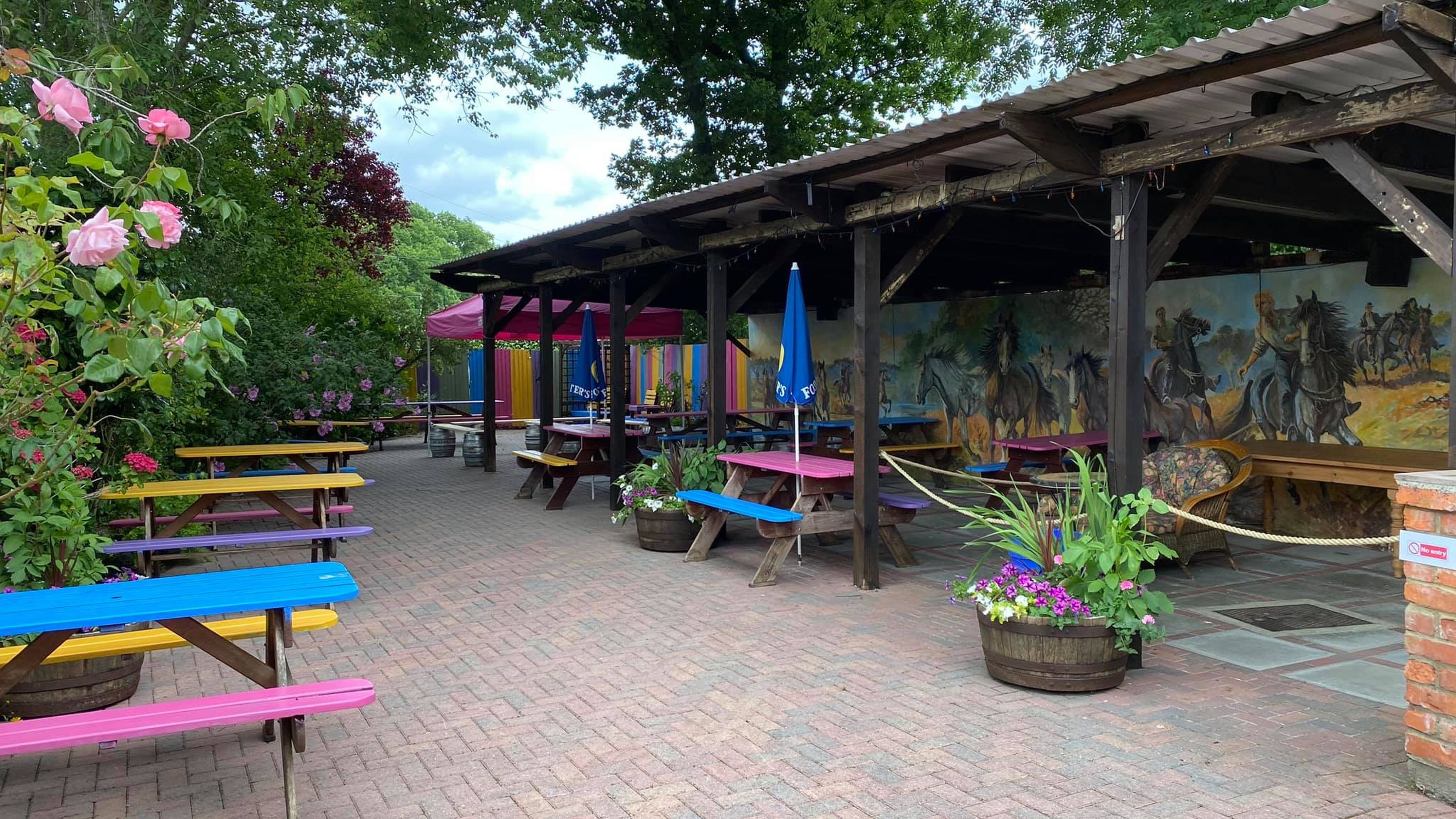 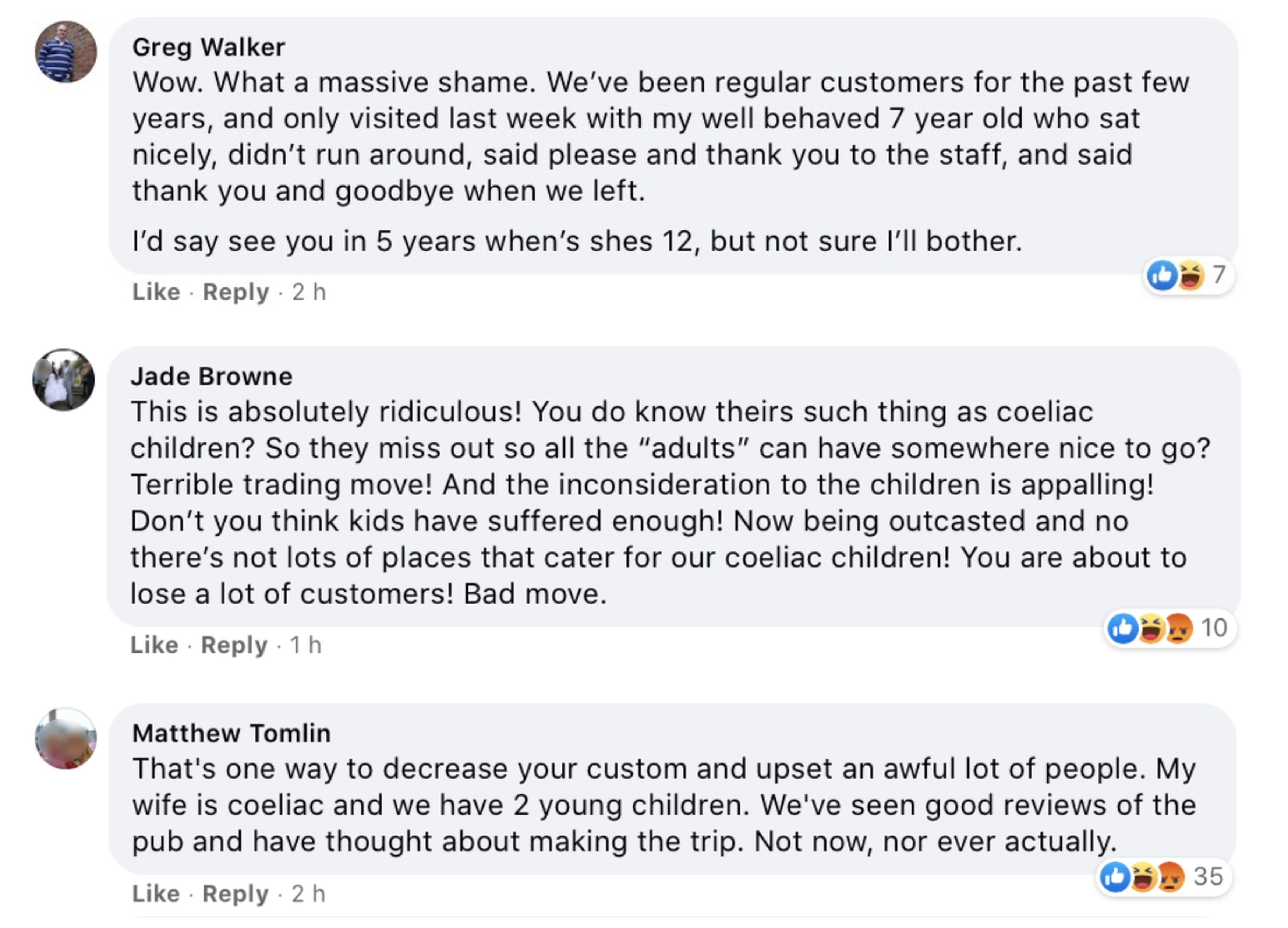 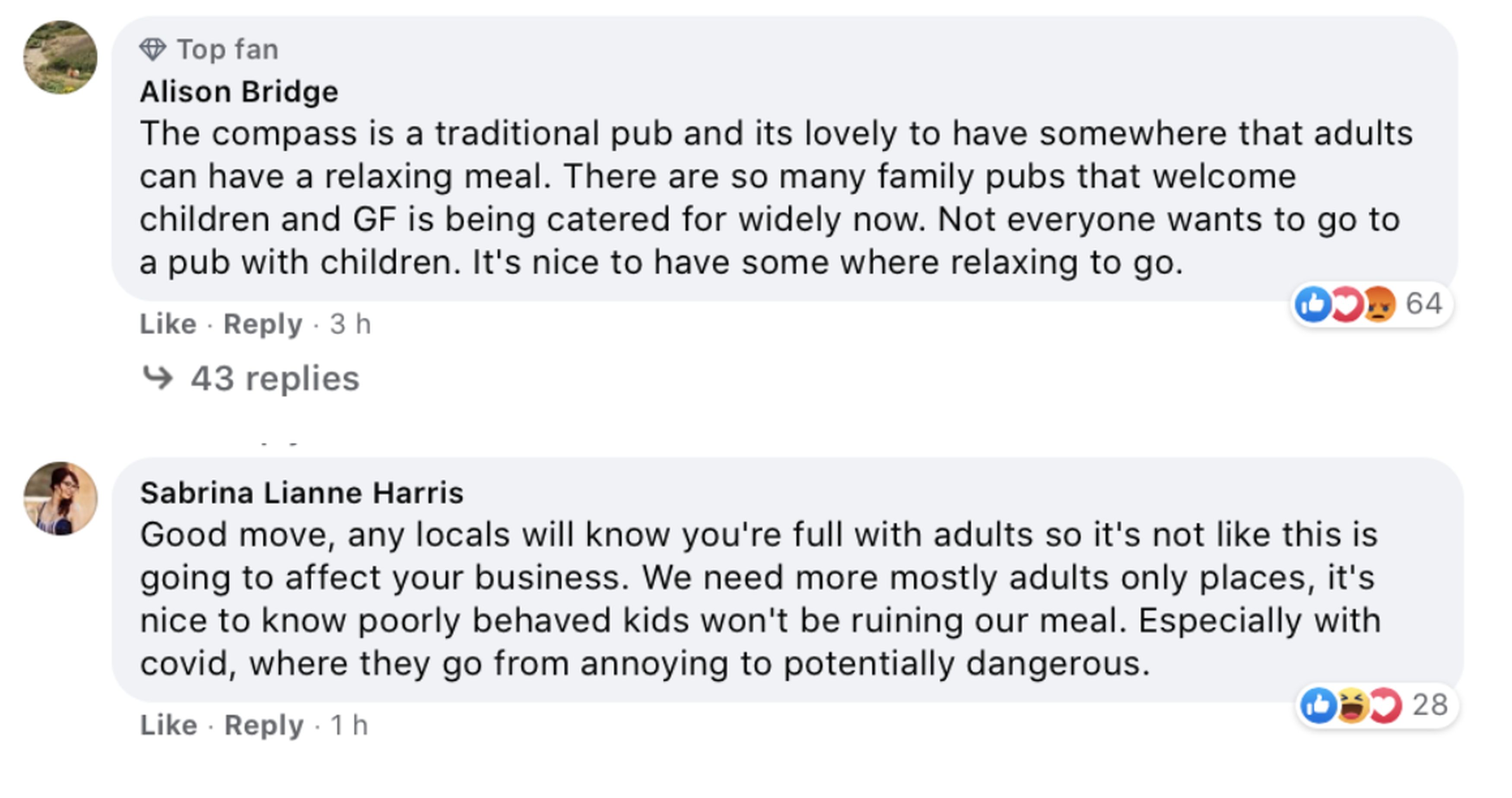