Give us a wave! Excited bears dance in their swimming pool in front of bemused children

A pair of excited bears have been captured dancing with two children in a US zoo.

The video, shot in St Louis, Missouri, shows a large brown bear jumping up and down in a swimming pool.

At first, the two young children on the other side of the glass appear uninterested in the dancing mammal.

But with their parents filming from behind, they soon start copying the excited bear.

Its dancing partner then joins in the fun and starts bouncing up and down in the water.

The large animals send the water splashing as the two young children start to mimic their moves.

Their parents laugh as the bears dance in tandem to the children pressed up to the glass. 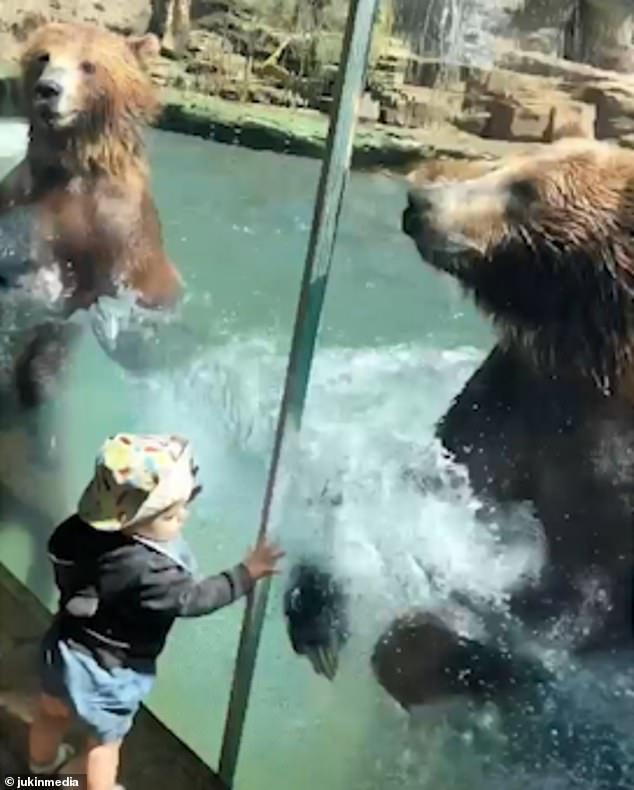 Grizzly Rogers and Fred Astbear! The two large mammals dance side by side jumping up and down in the water

The Grizzly Ridge of Saint Louis Zoo is a complete reconstruction of the zoo’s 1920s bear grottoes.

The bears can weigh up to 635kg and are often found in the wild in North America, mostly in Alaska.

The zoo was first opened in 1910 and now welcomes around three million visitors to see the 16,000 animals.