Germany’s biggest opposition party, the Alternative for Deutschland, has turned its ire onto the European elite, calling for the EU election to be a referendum on how Brussels is run. The party’s parliamentary chief Alexander Gauland told supporters that Europeans could teach Brussels humility during the elections at the end of May. This comes amid a growing alliance between far-right eurosceptic parties, led largely by Italy’s Matteo Salvini, ahead of the crucial ballot that could determine the future of the EU.

He said: “I really hope that the result of these elections will teach them self-doubt.

“It could have happened with Brexit but apparently that wasn’t enough for them.”

The German MP was speaking alongside other European politicians who aim to turn the European Alliance of Peoples and Nations into the most powerful bloc in the Parliament. 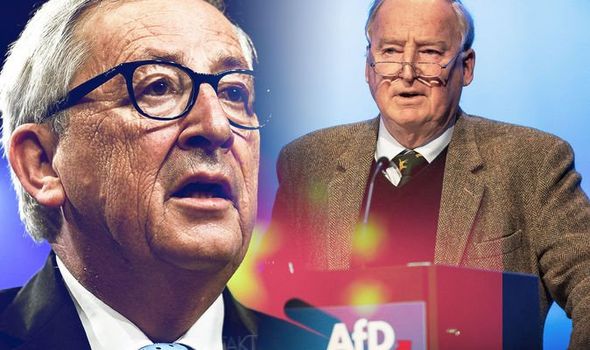 Italy’s deputy prime minister Matteo Salvini is leading the efforts to put together a Europe-wide alliance of nationalist, anti-immigration parties.

Earlier this week, Mr Salvini visited his Hungarian counterpart in a bid to convince Viktor Orban to join the alliance.

During the meeting, Mr Orban remarked: “For this, I think Salvini is the most important person in Europe today.”

Anxiety among European Union officials is high, with fears of a Eurosceptic, nationalist surge.

The European Commission president Jean-Claude Juncker claimed that the European Union has lost its “libido”.

He conceded that the growth of Eurosceptic parties  was an ominous sign for the continent.

His remarks come days before a leaders’ summit on the future of the bloc in the Romanian city of Sibiu.