The European Union are expected to face an uphill battle with growing populist parties across the bloc ahead of the European elections scheduled for May 23-26. French philosopher Bernard-Henry Levi suggested outspoken eurosceptic like Italy’s Matteo Salvini or French far-right politician Marine Le Pen could receive the backing of “external forces” to further undermine the European project in the run-up to the European vote across the member states. Speaking to Euronews, Mr Levi said: “You have now some political forces who use democracy to ruin democracy, who use elections in order to torpedo the system which makes election possible and who are going to use the European Parliament to corrupt from the inside, to weaken and maybe destroy the European project itself

“You have populist movements all over Europe supported from outside by external force like Mr Putin.”

Brussels has repeatedly locked horns with Vladimir Putin following the annexation of Crimea to the Russian Federation in 2014 – which sparked retaliation from the bloc through high-pressure sanctions on Moscow imports and exports.

Mr Levi also suggested US President Donald Trump, to whom Italian deputy prime minister Matteo Salvini offered a close alliance, could play an important role in firing up support for eurosceptic parties during the European elections.

He continued: “The two enemies of European values are linked. 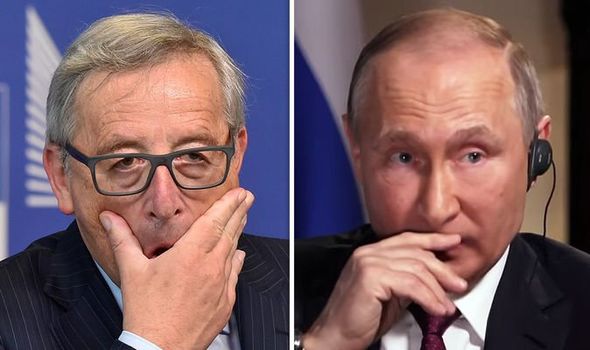 The European People’s Party (EPP) and the Progressive Alliance of Socialists and Democrats (S&D), historically the strongest in the European Parliament, could see their support eroded by populist and eurosceptic parties.

Anti-immigration Europe of Nations and Freedom (ENF), born from the alliance of Mrs Le Pen and Geert Wilders, leader of Dutch Party for Freedom, could gather 22 seats and jump from 37 to 59 MEPs.

Mr Salvini’s Lega, a member of the ENF, would be one of the parties gaining the most from the May election.

According to the European Parliament, Mr Salvini will get as much as 32.6 percent of the Italian votes, which would grant the party 27 seats, 21 more than the one it currently holds.

In the national election of March 4, 2018, Mr Salvini obtained 17 percent and entered the Government thanks to an alliance with the M5S, which got 32.66 percent.

The M5S has been losing consensus ever since, national polls have shown, and it looks set to reach 25.7 percent in May.

The European Parliament’s projection is based on national polls analysing how the parties will perform in the single state members of the EU.

This election, which will take place in the EU27 between May 23 to May 26, is scheduled to be the first one without the UK – unless Brexit is delayed further.