Nine European politicians lost in a maze? Jeremy Hunt can’t resist making a joke about Brexit as he and his foreign minister counterparts explore his country retreat

Jeremy Hunt invited comparisons to Brexit when he shared a picture of himself and his fellow EU foreign ministers in the middle of a hedge maze.

Posting a picture of the ministers, he tweeted: ‘Challenged a few of my fellow ministers to navigate the Chevening maze in the rain… by comparison to which Brexit discussions seem more straightforward.’ 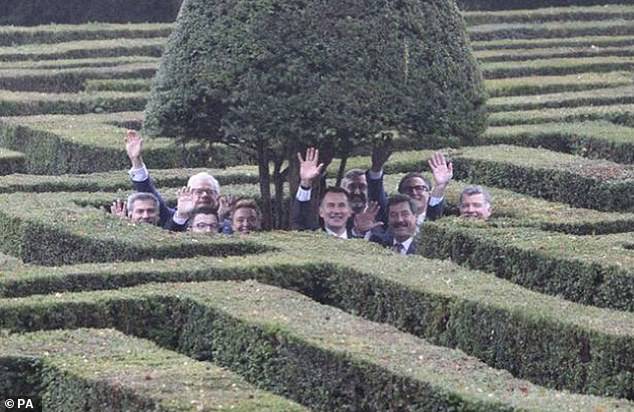 Posting a picture of the ministers, he tweeted that discussions on Britain’s departure from the EU ‘seemed more straightforward’ compared to navigating their way out of the maze

Last year Boris Johnson took an impromptu boat trip with a foreign counterpart despite desperate pleas from his then-wife to stay on dry land for fear they would be drowned.

During a walk around the estate the then- Foreign Secretary tried to encourage ministers from eight European allies to join him for a spin out in a rowing boat.

After Mr Johnson pushed the vessel out on to the water, wife Marina Wheeler – whom he is now divorcing – tried to persuade him to head to the house with the delegation.

Taking him by the arm, Ms Wheeler said: ‘Come on, they have got a programme. We don’t want to drown… we are not drowning the foreign ministers, come on.’

The timing of Sunday’s gathering comes at a critical point in the Brexit process, with EU leaders set to meet on Wednesday to consider progress in the talks.

It also comes ahead of meetings at the Foreign Affairs Council in Luxembourg on Monday where new chemical weapons sanctions will be formally adopted. 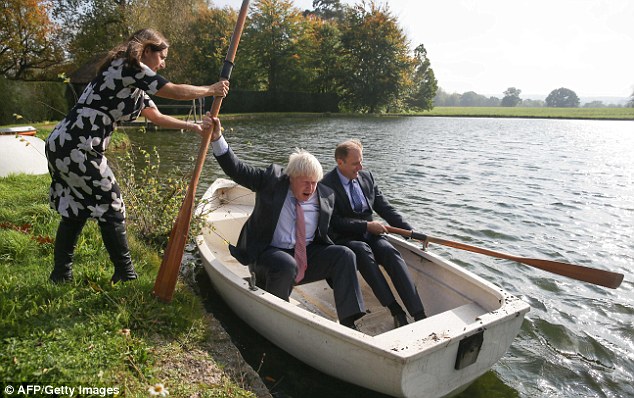 The EU is expected to adopt a new regime which will allow for asset freezes and travel bans to be imposed on individuals linked to chemical weapons use.

It follows the Novichok nerve agent attack in Salisbury which has been blamed on agents from Russia’s GRU military intelligence service.

Mr Hunt said: ‘For years there has been an international taboo on the use of chemical weapons, but that is at risk now after Syria and Salisbury.

‘We now need to redraw the red line that says that for anyone using these horrific weapons, the price will always be too high.

‘These new sanctions are vital, but they are not the end of the story.’

The GRU’s activities in cyberspace have been highlighted by the UK and its allies in recent weeks, with Russian hackers blamed for attacks including an attempt to infiltrate the systems of the chemical weapons watchdog in The Hague.