Crypto millionaire’s £100,000 yellow Audi R8 is defaced by vandals who sprayed the words ‘virgin’, ‘c**k’ and ‘show off’ across it

A self-made crypto-millionaire was horrified to find his £100,000 yellow Audio R8 supercar crudely vandalised with expletives after it was left in an open car park.

Waseem Khan, 20, was branded a ‘c***’ and a ‘show off’ by vandals who covered his flash motor with words like ‘virgin’ and ‘die’ across its bonnet, sides and boot.

Waseem Khan, who made his fortune trading crypto currency, had left his three-month-old Audi R8 V10 parked in Leeds overnight when he went to Manchester for a business meeting.

But when he returned the next morning, he realised to his ‘shock’ that vandals had used thick black paint to write rude slogans. 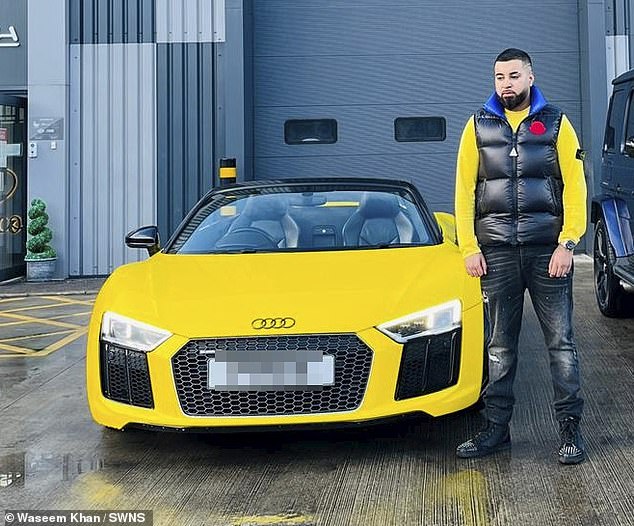 Waseem Khan, 20, was branded a ‘c*nt’ and a ‘show off’ by vandals who covered his flash motor with words like ‘virgin’ and ‘die’ across its bonnet, sides and boot

The young entrepreneur, who says he earned his money trading foreign currency and in crypto markets, said it might cost ‘thousands’ to repair his ‘dream car’.

Mr Khan said that he was still trying to find a way to remove the words, adding he didn’t know why his car had been targeted.

He added: ‘It could be anyone. I don’t want to point fingers. They are innocent until proven guilty.

‘A few people are saying I could use a chemical to get it off. If that works, it’s a few hundred pounds. If not, it could be thousands to get the wrap changed.

‘I drive the R8 all the time. It’s probably my dream car.’

Mr Khan said that despite being was shocked find someone had done this to the car, it won’t phase him.

The millionaire, who grew up with very little, says he can make £6,000 ‘while he sleeps’.

He said: ‘It was on Sunday night. I had to go out of town to Manchester on a business trip. I was in a rush and parked my car in the city centre. 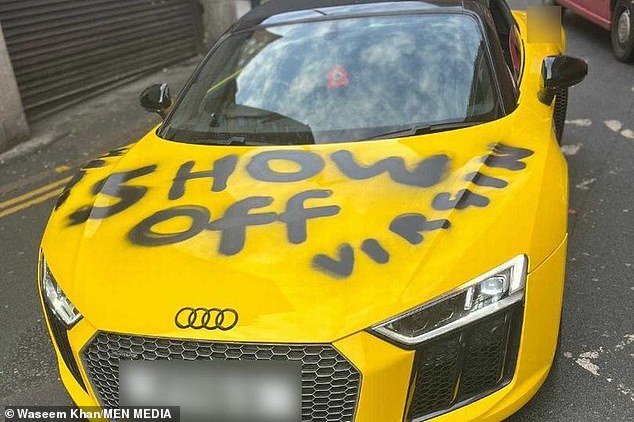 The young entrepreneur, who says he earned his money trading foreign currency and in crypto markets, said it might cost ‘thousands’ to repair his ‘dream car’

‘It was just in an open car park. It wasn’t the safest, but I didn’t think someone would do anything to the car.

‘I left it and came back in the morning. I went to go get my car. It just had all this writing in the paint all over it.

‘It was a bit of a shock. I looked to see if the car was damaged, and luckily it wasn’t. So I thought probably it will just wash off.

‘They have been scrubbing for ages, and it’s not coming off. That’s when I started panicking. I thought: ‘This won’t come off!’

‘I’m still trying to find a solution for that.’

Mr Khan, who also owns several businesses, said the Audi was one of three exclusive vehicles he has, including a Mercedes G-wagon and E63 AMG Mercedes.

He said the car had been bought with his hard-earned money following his work in the financial markets. 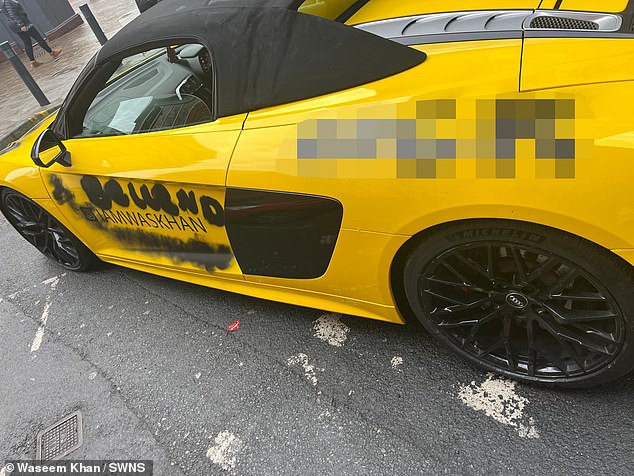 Mr Khan said that he was still trying to find a way to remove the words, adding he didn’t know why his car had been targeted

He said: ‘I do international trading, trading on the foreign exchange, which is known as the Forex exchange. I also do crypto and also have other businesses.

Mr Khan told LeedsLive: ‘I don’t really have any enemies, I think a lot of people just can’t see someone young, do good, you know I have a supercar at 20, they can’t put up with it.’

‘I would just like to say to them, what you have done is very low and pathetic and childish, you just cannot see someone young doing well, it is just pathetic, they could be following their own dreams instead of destroying someone else’s’.

Waseem, known as WasKhan online, has over 80,000 followers across several platforms and millions of views on TikTok, he recently featured in a video on the now-famous Wakey Wines account.

He went on to warn people about being popular on social media after this incident.

He said: ‘The dangers of being on social media is you attract a lot of good people and a lot of bad people.

‘I would like the person that did it, to come forward.’