When we were chasing doughnuts it was the exception, rather than the rule, that mattered.

The Aspen skiers who refused to stay at home. The surreptitious snifflers who kept turning up to work. The beautiful people who lingered outside the Botanical Hotel, takeaway coffee in hand, claiming barley from COVID-19 restrictions. 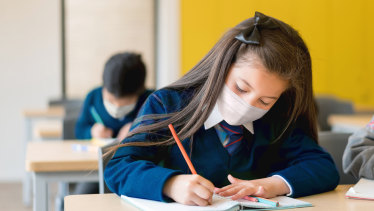 There has been a community-level push for greater mask wearing in schools.Credit:iStock

Back then, every breach was treated as a potential calamity and every recalcitrant as a threat to public health. It was this mindset, as much as any particular government order, that led to our zealous pursuit of COVID zero.

When more than 2 million Victorians have had the virus and, according to the Department of Health’s best estimates, the true number of active cases in Victoria is somewhere between 195,000 and 260,000, exceptions don’t matter so much.

If Charlie and Olivia refuse their school’s request to wear a mask in class, that doesn’t mean William and Muhammad shouldn’t be encouraged to keep theirs on. Where’s the consistency, ABC broadcaster Virginia Trioli demanded to know from Victoria’s Health Minister Mary-Anne Thomas.

In this our third pandemic winter, uniform government decrees telling us what to do, where to go and what to wear to avoid the virus are as popular as a coughing fit in a lift. No one understands this better than Daniel Andrews, the state premier who for the worst past of two years led our pandemic response.

The premier’s office was not particularly happy with the wording of the joint missive from the Department of Education, Independent Schools Victoria and the Catholic Education Commission sent to school principals on Monday, but it does support a community-level push for greater mask wearing in schools.

Acting Chief Health Officer Ben Cowie would have preferred that masks be mandated, but in his advice relied on by the premier to extend the pandemic declaration, he accepts we are shifting away from a centralised pandemic response to one led by individuals, communities and organisations.

The mask recommendation in schools is a good example of what this looks like. It was developed largely by Independent Schools Victoria, independent of government, informed by the experience of individual schools that had managed recent outbreaks. 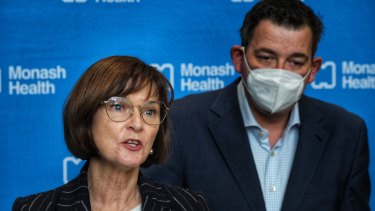 Independent Schools Victoria in its preliminary advice to schools quietly distributed on Friday makes clear that its recommendations are made not only with COVID-19 in mind, but in response to the “multi-demic” of COVID, influenza and respiratory syncytial virus doing the winter rounds. The latter two tend to disproportionately infect children.

As long as some, if not most, children do what their schools are now asking of them, fewer cases of COVID, the flu and RSV will be passed around the classroom, fewer children will infect their parents or grandparents, and just maybe, fewer people will end up in hospital with severe COVID disease.

At the very least, children who agree to wear masks in class will do their bit to ensure that the other stuff at school – the fun stuff such as playing sport and music and going on camps and excursions – isn’t swamped by the current Omicron wave.

Across Victoria on Monday, thousands of school principals sent out emails to parents explaining the recommendation. The language and tone of the communications varied, but the essential message was the same: until this wave subsides, masks are back.

Compliance will vary from school to school, class to class, face to face. Yes, there will be inconsistency. That doesn’t render the mask recommendation futile. Nor does it make the case for mandates.