Washington: House Minority Leader Kevin McCarthy, a Republican, is threatening telecommunications and social media companies that comply with a request by the committee investigating the January 6 attack on the Capitol by a pro-Trump mob, declaring that Republicans “will not forget” their actions.

McCarthy spoke by phone with then-President Donald Trump on the day of the attack and is a potential witness in the select committee’s probe. 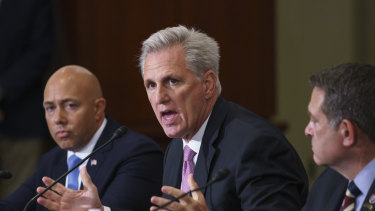 The panel on Monday asked 35 companies to retain phone records and other information related to the attack as it ramps up its investigation ahead of the return of Congress next month. Several of the companies indicated this week that they intend to comply with the panel’s requests.

“Adam Schiff, Bennie Thompson, and Nancy Pelosi’s attempts to strong-arm private companies to turn over individuals’ private data would put every American with a phone or computer in the crosshairs of a surveillance state run by Democrat politicians,” McCarthy said in a statement Tuesday night, referring to the chairman of the House Intelligence Committee, the chairman of the select committee and the House speaker.

Republican-led order: the January 6 riot at the US Capitol.

The panel is charged with investigating the facts and causes of the insurrection and will provide recommendations to help prevent similar attacks in the future.

McCarthy said on Tuesday: “If these companies comply with the Democrat order to turn over private information, they are in violation of federal law and subject to losing their ability to operate in the United States.”

“If companies still choose to violate federal law, a Republican majority will not forget and will stand with Americans to hold them fully accountable under the law.”

It is not clear what law McCarthy is asserting the companies would be breaking if they comply with the panel’s request. McCarthy’s office did not immediately respond to a request for comment Wednesday. 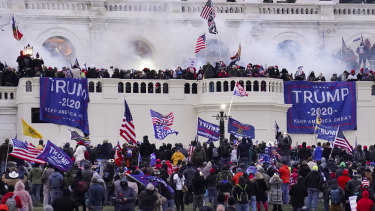 A US Select committee is seeking phone records of Republican politicians from January 6, the day of the riot on the Capitol.Credit:AP

Tim Mulvey, a spokesman for the select committee, said Wednesday that the panel “won’t be deterred by those who want to whitewash or cover up the events of January 6th, or obstruct our investigation.”

“The Select Committee is investigating the violent attack on the Capitol and attempt to overturn the results of last year’s election,” Mulvey said in a statement. “We’ve asked companies not to destroy records that may help answer questions for the American people.”

Some Democratic lawmakers and legal experts on Wednesday accused McCarthy of trying to obstruct justice by threatening the companies.

“McCarthy just made the Congressional equivalent of a ‘Snitches Get Stitches’ threat,” Representative Eric Swalwell, a Democrat, said in a tweet. “When people do that in our communities we hold them accountable. If we have no law and order we’ve lost everything.”

“It’s Orwellian. If these telecom companies fail to comply with the requirement to preserve these records, if they did what Kevin McCarthy wants . . . that would be a violation of law,” Eisen, the executive chairman of the States United Democracy Centre and a senior fellow at Brookings, said during an interview on CNN.

“So this is absolutely unjustified by law, and it raises serious questions under the House ethics rules and other laws for Kevin McCarthy himself.”

The select committee’s chairman, Representative Bennie G. Thompson, a Democrat, recently said his panel would not shy away from investigating lawmakers as part of its inquiry, highlighting the remarkable nature of Congress investigating an attack on itself.

The committee’s plans have already drawn criticism from Republicans, most of whom have opposed investigating the insurrection and Trump’s role in inspiring the mob with his false claims about Joe Biden’s win in the 2020 election.

The request that went out Monday was sent to tech and social media companies including Facebook, Google, Microsoft, Twitter and Signal, as well as telecommunications companies such as Verizon Wireless, AT&T, Sprint and T-Mobile.

The panel is asking the 35 companies to preserve “metadata, subscriber information, technical usage information, and content of communications for the listed individuals.”

In recent days, some of the companies have indicated that they intend to comply with the panel’s requests, including social media platform Reddit and Snap, owner of the video-sharing platform Snapchat.

Reddit spokesperson Cameron Njaa said in an emailed statement that company executives have “received the letter in question and are fully cooperating with the Committee on this matter.”

Snap spokesperson Rachel Racusen said its leaders “plan to comply” with the requests.

Other companies, including Facebook and Google, said they plan to work with the committee but would not say whether they will comply specifically with the recent requests.

Ivy Choi, a spokesperson for Google, which also owns YouTube, said they “have received the Select Committee’s letter and are committed to working with Congress on this”. 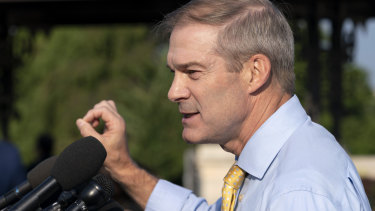 Facebook spokesperson Andy Stone said in a statement, “We have received the request and look forward to continuing to work with the committee.”

McCarthy and Representative Jim Jordan, a Republican, have been the recent subjects of questions about which members could be called to appear before the select committee.

Earlier this year, Representative Jaime Herrera Beutler, a Republican, described what McCarthy told her about a phone call he had with Trump on January 6 in which he asked the president to help calm supporters who had broken into the Capitol.

“When McCarthy finally reached the president on January 6 and asked him to publicly and forcefully call off the riot, the president initially repeated the falsehood that it was antifa that had breached the Capitol,” Herrera Beutler said in a statement in February, referring a to a loosely knit group of far-left activists.

“McCarthy refuted that and told the president that these were Trump supporters. That’s when, according to McCarthy, the president said: ‘Well, Kevin, I guess these people are more upset about the election than you are.’ ”