P-plate driving tests could change to help deal with a backlog of tens of thousands of Victorian learner drivers prevented from getting their licences under COVID-19 restrictions.

Premier Daniel Andrews said on Friday driving tests may end up “being conducted in very different ways”, similar to potential changes for this year’s school exams.

Many learner drivers have not been able to accrue the 120 hours of supervised driving needed to complete a test, due to stage four restrictions on reasons for leaving home. 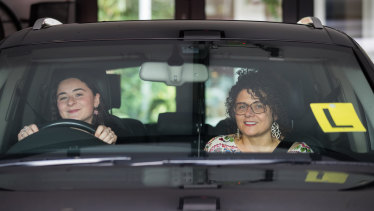 Gemma Robinson (left) is not allowed to take a driving lesson with her mum Cathy due to COVID-19 restrictions.Credit:Jason South

Gemma Robinson, who turns 18 in November, said she was frustrated about not taking a driving lesson during lockdown.

"I am a long way off with my hours at the moment," she said. "It's something I want to get as soon as I can."

With only 30 hours of practice accrued, Gemma isn't sure how long it will take her to qualify to take the test.

"Even little things like being able to drive to the supermarket, I can't do that because only one person is able to go at the one time," she said.

Mr Andrews said his 18-year-old son Noah was in the same situation as tens of thousands of other Victorian teens unable to take a test or accrue the full hours.

"It’s a very significant challenge … there is a backlog there, and we’re going to have to look at different arrangements for testing," he said. 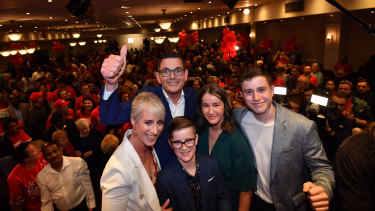 Premier Daniel Andrews’ son Noah (right) has been unable to take the test or get his required practice hours.Credit:Joe Armao

"We’re going to have to make some very difficult judgments about if we stick with the current hours. I’m not foreshadowing a different position, but we are looking at all those things.

"We want people to have that independence, freedom and mobility that comes from getting their P-plates."

With driving tests normally booked out well in advance, Gemma said she was anticipating a long wait to get an appointment once restrictions are lifted.

That could have consequences for people who need a car to go to university next year, she said.

"They're going to be booked out for so long, there are many who had tests booked in before lockdown who will get priority," she said. 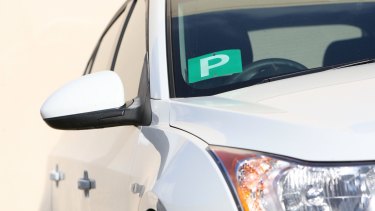 P-plate tests could change due to the coronavirus pandemic.Credit:Vicky Hughson

After a tough year 12 learning from home, Gemma said not getting her licence would mean missing out on independence of becoming an adult.

"Having your licence it gives you a lot of freedom, you can go places with your friends you're not tied down," she said.

Gemma's mother, Cathy, said she doesn't want the requirement to get 120 practice hours changed but hopes learners will be allowed out on to the roads soon.

"The roads are quiet, it's an optimal time to get them out on the road and get their confidence up," she said.

"And you're not leaving your car, you're not interacting with anyone else."

In April, at the start of Melbourne's lockdown, 17-year-old Hunter Reynolds was pulled over by police about 20 minutes into a drive with her mother on the Peninsula Link in Frankston, and told she was "too far from home".

She was initially fined due to the driving practice being considered non-essential travel, but the infringement was later dropped.

Get our Coronavirus Update newsletter for the day’s crucial developments and the numbers you need to know. Sign up to The Sydney Morning Herald’s newsletter here and The Age’s here.