A woman in North Carolina who became enraged by another driver after water splashed onto her car on the highway was shot in the face during a road rage incident – and a suspect has since been arrested.

Emergency responders rushed 43-year-old Angela Mischelle Duncan of Gastonia to a hospital after a bullet entered the right rear window of the car she was driving around 10:40 a.m. Sunday while traveling on U.S. 321 South near the Gaston-Lincoln county line, the Lincoln County Sheriff`s Office said in a press release. She was struck in the face, according to The Charlotte Observer, and her condition was not known early Tuesday.

Deputies who first arrived to the scene found two vehicles pulled over to the shoulder of the road, and “officers learned that occupants of the vehicles got into an altercation on the highway as they traveled south on Highway 321,” according to the sheriff’s office.

The dispute broke out after Duncan became enraged at another driver for tossing water from a bottle onto the highway and some of the liquid splashed onto her vehicle, Larry Seagle, a spokesman for the Lincoln County Sheriff`s Office, told The Charlotte Observer.

Fox News left a voicemail for the sheriff’s office Tuesday but did not immediately hear back. 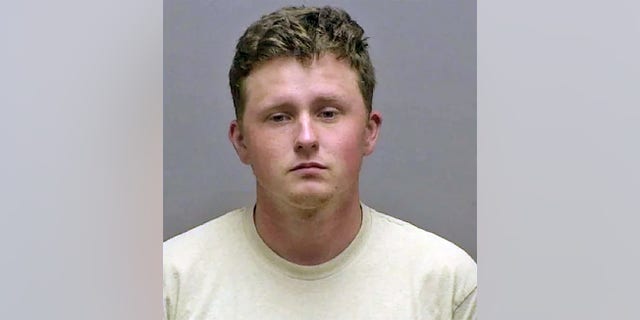 London David Feldman II is accused of firing at a woman on a North Carolina highway during a road rage related incident on Sunday.
(Lincoln County Sheriff’s Office)

The driver of the other vehicle is now facing two felony charges. Londen David Feldman II, 23, of Hickory, is charged with assault with a deadly weapon inflicting serious injury and discharging a firearm into occupied property. Feldman was arrested Sunday at 700 John Howell Memorial Drive in Lincolnton and was held at Lincoln County Jail on a $35,000 bond, an arrest report viewed by Fox News shows. His occupation was listed as a plumber.

A grand jury in Lincoln County on Monday night indicted Feldman on those charges, WSOC-TV reported. The station reported that both vehicles pulled over and dialed 911 after the incident, and that the sheriff was working with the District Attorney’s Office to determine appropriate charges.

Deputies seized two firearms from Feldman’s car, and another firearm from Duncan’s car, the sheriff’s office press release said. A passenger, identified as 19-year-old Kara Lynn Parsley of Hickory, was questioned by deputies but was not charged, the Gaston Gazette reported.

Duncan was treated at CaroMont Regional Medical Center in Gastonia for her gunshot wound to the face and has since been released, the Gaston Gazette reported, citing Seagle.