Former US President Donald Trump claimed the Queen and Camilla were competing with each other for his attention at a royal banquet, and also told Piers Morgan the monarch is ‘truly a legend’.

Mr Trump said he was in the company of Camilla and the 96-year-old Queen during an event at Buckingham Palace in June 2019, which he attended with his wife, Melania, and his older children.

The ex-US president, who was speaking to Piers Morgan for his show on new channel Talk TV, with the second half of the interview airing at 8pm tonight, said: ‘She [Camilla] was on my right, the Queen was on my left, and I said “Queen, I really have to talk to Camilla for a little while too”. We couldn’t break apart.

‘[Camilla] was funny, she was smart, she was quick, she was great. I like her too. I like Charles.’

When asked if he thinks Charles and Camilla will make a good King and Queen when the time comes, Mr Trump said: ‘I hope so. I think it’s going to be tricky because they are truly replacing a legend when you talk about this woman [the Queen].’ 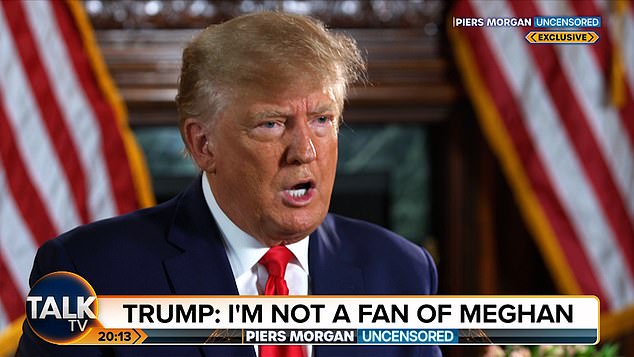 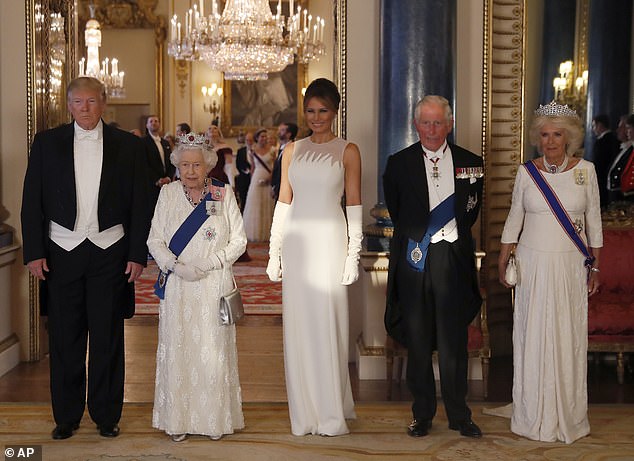 Mr Trump said he was in the company of Camilla, Charles and the 96-year-old Queen during an event at Buckingham Palace in June 2019, which he attended with his wife, Melania, and his older children

Mr Trump also claimed the Queen had never had such a good time’ than when he was sitting next to him at the state banquet.

He said: ‘And I sat next to her and we talked the whole night. And somebody said, we’ve never seen her smile so much. We had a great time. She was laughing and smiling.

‘They said they’ve never seen her have such a good time at a state dinner. You know, normally they’re a little boring. Okay, this wasn’t boring.’

Elsewhere in the Talk TV interview, Mr Trump blasted Prince Harry’s ‘terrible’ choice to miss his grandfather Prince Philip’s memorial service and said the Duke of Sussex is ‘whipped like no person I think I’ve ever seen’.

The ex-US president said it was the ‘worst’ decision Harry had made, blasted him for being ‘so disrespectful’ and an ’embarrassment’ – and urged the Queen to strip the Duke and his wife Meghan Markle of all their royal titles. 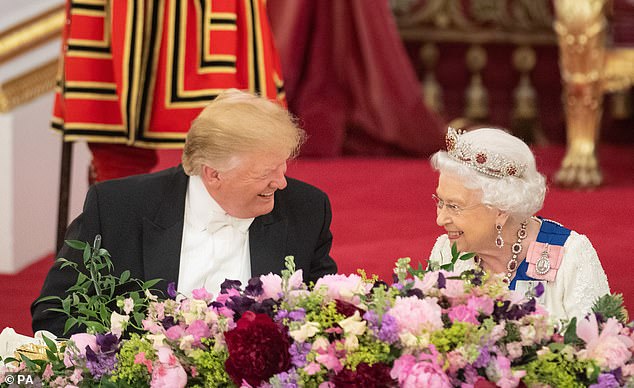 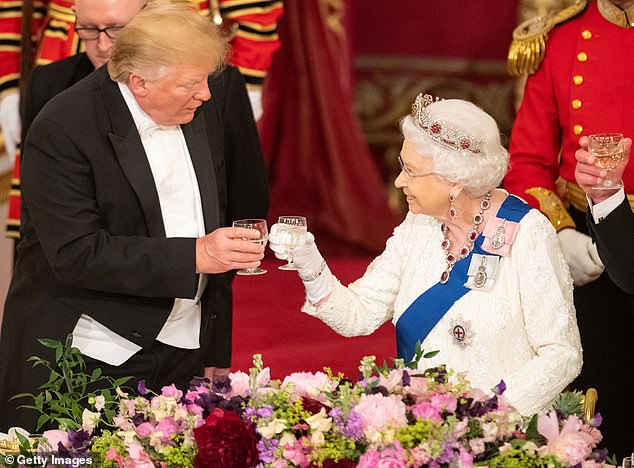 During his interview with Piers Morgan on TalkTV, Mr Trump called the Queen a ‘legend’

Mr Trump added that the Queen should ban Harry from even visiting her in Britain and tell him: ‘Frankly, don’t come around.’

‘I’m not a fan of Meghan. I’m not a fan and I wasn’t right from the beginning. I think poor Harry is being led around by his nose.’

When asked by Mr Morgan if he thinks Harry and Meghan’s marriage is going to end, Mr Trump added: ‘I do. I’ve been a very good predicter as you know. I’ve predicted almost everything. It’ll end and it’ll end bad.

‘And I wonder if Harry’s going to go back on his hands and knees and say “please”. I think Harry has been led down a path.’

‘The only thing I disagree with the Queen on – probably one of the only things ever – is that I think she should have said “if that’s your choice, fine, but you no longer have titles and frankly don’t come around”.

‘He has been so disrespectful to the country and I think he is an embarrassment.’ 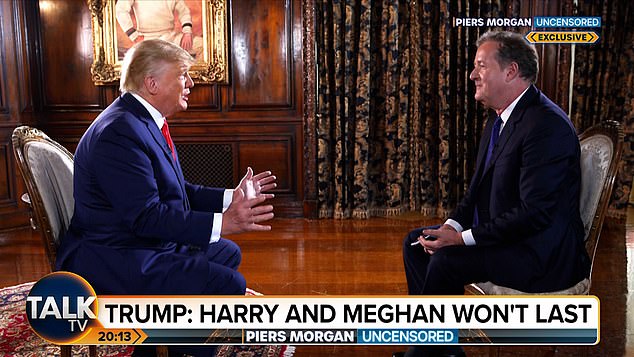 The ex-US president was speaking to Piers Morgan for his show on new channel Talk TV, which aired at 8pm tonight

The Sussexes were noticeably absent from Philip’s memorial service at Westminster Abbey last month amid rows between Harry and the Home Office over personal protection during visits from their home in the US.

After his grandfather died in April 2021, Harry returned for the funeral at St George’s Castle in Windsor Castle – and was said to have wanted to travel to the UK for the thanksgiving service on March 29, along with his family.

But sources suggested his legal position could have been ‘undermined’ if he had travelled from the US.

Harry brought a High Court claim against the Home Office after being told he would no longer get the same degree of personal security when visiting the UK, despite offering to cover the costs himself.

Mr Morgan spoke to Mr Trump about Harry missing the memorial, saying: ‘I couldn’t believe that he would not go to that, he was at the Super Bowl. He was at a Texas rodeo. But he couldn’t find time to get on a plane.’