Assistant surgeon Dr Sarah Spargo was almost through a routine hip replacement when she started seeing double. She suspected something in her eye, so she blinked and shook her head. It didn't work.

She set aside the retractor holding the patient's skin open and, for the first time in her career, declared to colleagues around the operating table that she was stepping back.

"I found a chair to sit down on and [surgeon, Professor Peter Choong] said ‘Sarah, look over at me’," Dr Spargo said. 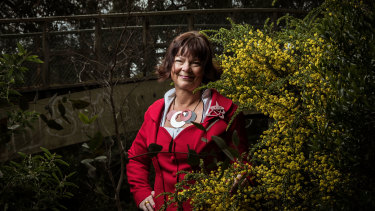 Dr Sarah Spargo, who suffered a stroke while performing surgery, is urging Australians to seek treatments a the first signs. Credit:Darrian Traynor

"I remember looking up and not being sure who to look at. He said, very calmly, 'I think we’ll get an emergency CT [scan]'."

Within minutes she was being wheeled through the corridors connecting St Vincent's private and public hospitals to the emergency department. Her left side had stopped working and she couldn't remember her husband's full mobile phone number.

Her stroke on the morning of February 21 was the biggest St Vincent's had treated up to that point in the year.

"In the weeks after it was really hard to come to terms with," said Dr Spargo, who has since "fundamentally" recovered.

Dr Spargo is fortunate those around her in the operating theatre knew the signs of stroke.

Data shows fewer Australians are presenting at hospitals for stroke during the pandemic and Dr Spargo has joined other professionals in pleading for people to seek treatment even for the mildest symptoms.

"The aim is recognise the signs and treat it as early possible," Dr Spargo said. "The three elements in my excellent recovery were the professor calling it quickly, going to a very good stroke unit and getting treatment in a timely manner."

A May study by the Australian Stroke Clinical Registry found about half of the 54 hospitals surveyed reported reduced presentations, particularly for mild stroke.

Almost one in three reported a longer time from stroke onset to presentation.

Stroke Foundation chief executive Sharon McGowan said ambulance colleagues had reported a nationwide fall in emergency calls of about 20 per cent across since the pandemic began.

"Specifically for stroke, they saw a five per cent drop," she said.

Fear of catching COVID-19 is believed to be a key factor behind the figures.

"Someone who develops, for example, speech disturbance or limb disturbance and then gets better might think ‘well, it’s a bit worrying but I really don’t want to go to the hospital'," said Professor Stephen Davis, director of the Melbourne Brain Centre at Royal Melbourne Hospital.

"The big risk then is that they have a much bigger and more devastating stroke days or weeks after the first event."

Dr Cheryl Carcel, senior research fellow and neurologist at Sydney's George Institute for Global Health, said people living or working alone during lockdown might also miss out on early treatment because there were no people around to recognise the signs.

Cerebrovascular disease, which includes stroke, is in the top five causes of death in Australia.

The doctors say people should remember the FAST test: Face (drooping mouth), Arms (inability to raise them), Speech (slurred) and Time (call Triple 0 immediately at any of these symptoms).

Dr Spargo, who also assists in gastrointestinal and breast cancer operations, said it wasn't only strokes people were failing to get treatment for in the age of COVID-19.

"They’re staying at home to grow their cancers. We’ve seen that in the surgery list," she said.

"People have postulated these excess deaths are due to heart disease and stroke. It’s people not getting the treatment, not getting to hospital," she said. "In another study they also found there are more non-hospital cardiac arrests. People are dying from heart attacks outside of hospital."

The message from the doctors is for people not to delay potentially life-saving treatment.

"Call triple 0 if you have [stroke] symptoms and you will be looked after just as well as before the COVID crisis," Professor Davis said.

Face – check their face. Has their mouth drooped?
Arms – can they lift both arms?
Speech – is their speech slurred? Do they understand you?
Time is critical – if you see any of these signs, call 000.

The most important news, analysis and insights delivered to your inbox at the start and end of each day. Sign up to The Sydney Morning Herald’s newsletter here, to The Age’s newsletter here and Brisbane Times‘ here.