Could Covid cause HICCUPS? Doctors believe 48-year-old’s two-week bout of hiccups were caused by the illness

Hiccups could be a symptom of Covid, doctors have claimed.

Medics who treated an infected man who had hiccups for two weeks believe his symptoms were a ‘rare presentation’ of the illness.

Experts say Covid can attack the diaphragm — the muscle that controls breathing — causing it to spasm, leading to hiccups. Hiccups have also been linked to other infectious diseases including flu and tuberculosis.

The 48-year-old, from Egypt, first developed a fever, which he treated with over-the-counter medicine.

But then his persistent bout of hiccups kicked in, becoming even more severe over the course of the week. The unidentified man then also developed a sore throat and sought medical help. Doctors noted his fever had returned.

In order to understand what was causing his hiccups, medics in Cairo ordered an abdominal ultrasound after the bout became more severe and frequent. But they found nothing unusual.

His fever — a tell-tale sign of infection — led them to carry out a CT scan. It showed he had the characteristic signs of Covid, with white patches on the scan showing the pools of fluid built up in the lungs that are caused by viral pneumonia. 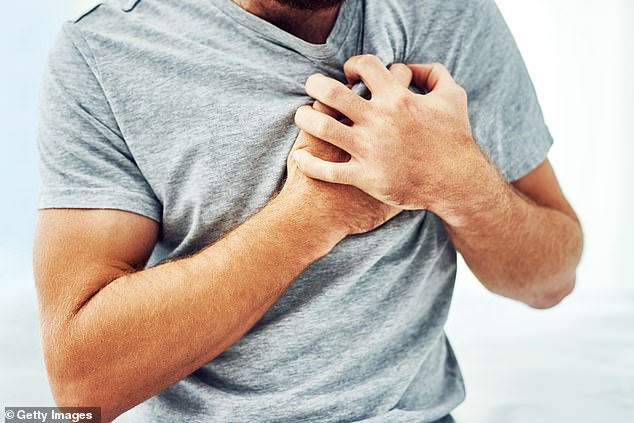 Doctors swabbed him for the coronavirus and put him in an isolated room – the test came back positive.

He was put on a drip which included fever-reducing drugs and hydroxychloroquine — the controversial anti-malarial touted by former US President Donald Trump as a ‘game changer’.

Because his hiccups were becoming frustrating, doctors gave him three extra drugs to try to help him breathe easier.

He slowly began to improve after medics increased the dosage of baclofen, which is used to treat muscle spasticity and persistent hiccups.

WHICH SYMPTOMS ARE MOST COMMON?

Office for National Statistics data for England, between October and January, shows these were the most common symptoms among people testing positive for coronavirus:

Hiccups are caused by sudden, involuntary contractions of the diaphragm. People should seek medical help if their bouts last longer than 48 hours, according to the NHS.

Ten days after was admitted to one of Cairo University Hospitals, the man was discharged following a negative Covid test.

In the study, published in the journal Respiratory Investigation, the team said hiccups could be a ‘direct effect of the infection’.

But the medics, led by Nader Bakheet at Cairo University, also admitted they could have been a ‘coincidence’ because they could not confirm a link with Covid.

However the team urged medics to keep a ‘high level of suspicion’ when faced with patients with uncommon Covid symptoms and to use PPE.

Other similar cases of hiccups and the coronavirus have been noted.

A 62-year-old man from Chicago who tested positive for Covid had persistent hiccups but he improved after just three days of treatment.

Doctors from Cook County Hospital treated the man in July last year after he had been hiccupping for four days but showed no other signs of illness.

The man was kept in for three days, treated with drugs and then sent home – and it was only when the infection started to clear that his hiccups finally stopped.

Other scientific reports talk of sudden hair loss, ringing in the ears, double vision and even trouble passing urine as possible first signs of Covid infection.

Scientists believe the bizarre symptoms could be linked to the ACE2 receptor – the target which the virus aims for when it is trying to break into healthy cells so it can use them to reproduce.

It is found everywhere from the brain, stomach and lungs to the skin, bone marrow and kidneys.

‘There’s still a great deal we do not understand about this virus,’ says Dr Stephen Griffin, a virologist at Leeds University School of Medicine.

‘But one thing we do know is that the ACE2 receptor is found on lots of different tissues around the body. And post-mortems have shown the virus can reach all sorts of places.’

Professor John Oxford, a virologist at Queen Mary University, London, says many viruses would probably have the same variety of effects seen with Covid. The difference now is simply the scale of infection.

‘We are probably seeing these more unusual symptoms mainly because of the sheer numbers of people being infected,’ he says.

‘Symptoms that might be overlooked during an epidemic within one country or region tend to be much more noticeable during a pandemic across continents.’