In 1998, my family decided to leave Afghanistan for good. The Taliban had emerged four years earlier and in 1996 had taken control of Kabul, Afghanistan’s capital, imposing an ultra-conservative interpretation of Islamic sharia law. The Taliban’s rule was noted for its cruel corporal punishments, including public executions, the suppression of freedom of religion and expression, and the destruction of Afghanistan’s historical heritage. The year we left, the Taliban massacred 2000 Hazara men and boys in the northern city of Mazar-i-Sharif.

Seventeen years later, I decided to go back to live and work in Afghanistan. The Taliban had been driven from power by the US-led war on terror, but Taliban insurgents had resurfaced and organised frequent suicide attacks targeting schools, educational centres, universities, mosques, and hospitals and indiscriminate attacks on civilians. 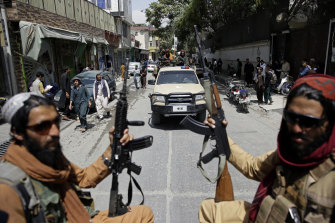 Kabul fell to the Taliban without a formal transfer of power.Credit:AP

In 2014, I started my assignment with a foreign donor agency in the country. My return coincided with the Afghan administration and its US and NATO allies signing a new bilateral military agreement. The Taliban retaliated with intensive attacks on civilians. I vividly remember the day we had four massive explosions close to my office targeting aid workers and civilians. I was newly arrived, and it was one of the hardest days for me in Afghanistan.

Soon after, daily and weekly bombing of civilians was something I adjusted to as part of my new normal. The Taliban insurgents took direct responsibility for those attacks.

On August 15, Kabul fell to the Taliban once again, without resistance or a formal transfer of power. Overnight, my country’s name changed from Islamic Republic of Afghanistan to the Islamic Emirate of Afghanistan, and its flag changed to the Taliban’s.

But, while the Taliban has managed to take a de facto control of the country, formal international recognition of its Islamic emirate remains elusive.

During its previous rule from 1996 to 2001, the Taliban’s emirate received recognition from three countries: Pakistan, United Arab Emirates, and Saudi Arabia.

The international community faces the difficult question of whether or under what conditions it will formally accept this new Taliban government.

Recognition of a state or government under international law is not straightforward. Article 1 of the Montevideo Convention sets out the requirements for recognition of a state as follows: “The state as a person of international law should possess the following qualifications: a permanent population; a defined territory; government; and capacity to enter into relations with the other states.”

These requirements have evolved to include additional elements such as whether the new state is formed through legitimate means, is seen as the legitimate representative of the people it purports to govern, and has the capacity and willingness to honour its international obligations.

While states have the sovereign right to decide whether to recognise a government or not, in cases when the new government has come to power through force or other extra-legal means this recognition is often not automatic.

The Taliban has taken control of Afghanistan through force and, over the last 20 years, it has taken direct responsibility for deadly attacks on civilians, committing war crimes and crimes against humanity.

Therefore, although the Taliban may have de facto control of Afghanistan’s territory, the group has failed to uphold its international obligations, such as the responsibility to protect and respect the human rights of Afghan citizens and is unlikely to do so. For instance, the group has started a door-to-door manhunt for people who have worked with international missions, the previous government and, of course, Afghanistan security forces.

As I am writing, I have friends and relatives in Afghanistan who are at serious risk of retaliation by the Taliban. I have lost touch with most as they have deactivated their social media accounts and are out of reach.

The international community must not recognise the Taliban as the government of Afghanistan. It does not represent us, or protect and respect our human rights. Do not give the group the legitimacy it craves. It does not deserve it.

Azadah Raz Mohammad is a Melbourne human rights lawyer. She is raising money for individuals in Afghanistan needing help to leave the country. For more information go to: Evacuating Afghans at Serious Risk.