Charleston, South Carolina: They left it until the very last minute, and they may not have gone in nearly hard enough.

But the Democratic Party's presidential contenders finally got around to targeting frontrunner Bernie Sanders for his big-spending policies, patchy record on gun control and praise for revolutionary far-left leaders. 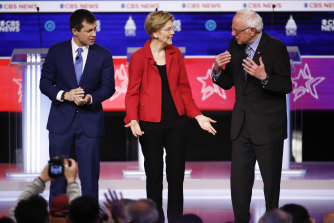 Sanders, a self-described democratic socialist, trounced his rivals in last week’s Nevada caucuses and has been rising in the polls ahead of this weekend's South Carolina primary, putting him in a strong position to win the Democratic presidential nomination.

For the first time in the Democratic debates, the 78-year-old found himself consistently on the back foot, ultimately conceding he had made mistakes during his career in Congress.

In the rambunctious and often chaotic debate in Charleston, Massachusetts Senator Elizabeth Warren drew her strongest contrast yet with Sanders, a long-time friend and fellow progressive.

"Bernie and I agree on a lot of things but I think I would make a better president than Bernie and the reason for that is getting a progressive agenda enacted is going to be really hard and it’s going to take someone who digs into the details to make it happen," Warren said. 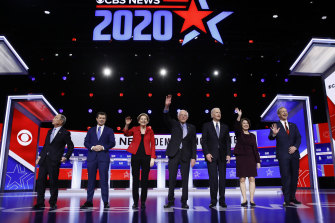 Pete Buttigieg, the former mayor of South Bend, Indiana, landed many of the most effective blows on Sanders.

"If you think the last four years has been chaotic, divisive, toxic, exhausting – imagine spending the better part of 2020 with Bernie Sanders versus Donald Trump," he said.

Buttigieg said that Sanders' proposal for a government-funded healthcare scheme, known as Medicare-for-all, would lead to four more years of Trump and Democratic losses in the US House of Representatives and Senate.

“I’m hearing my name mentioned a little bit tonight," Sanders said, alluding to his lead in the national polls. "I wonder why."

Former vice-president Joe Biden attacked Sanders for voting against gun safety legislation in the 1990s, including his opposition to the so-called Brady bill that would have mandated background checks for gun purchases.

"Walking distance from here is Mother Emanuel Church – nine people shot dead by a white supremacist," Biden said. "Bernie voted five times against the Brady bill and wanted a waiting period of 12 hours. I’m not saying he’s responsible for the nine deaths but that man would not have been able to get that weapon if the waiting period had been what I suggested."

Sanders conceded: "I’ve cast thousands of votes, including bad votes. That was a bad vote."

Biden is counting on a strong performance in South Carolina to keep alive his hopes of winning the nomination.

He put in a vigorous performance early in the debate, and drew cheers for telling the debate moderators that he would not stick to the allocated time limit when other candidates were speaking for longer than they should have.

Sanders has been attacked in recent days – including from Democratic politicians – for saying that Cuban communist leader Fidel Castro, while an authoritarian, introduced an effective literacy program.

The swing state of Florida has a high number of Cuban exiles who resent Castro and the Cuban Communist Party.