A delivery driver was forced to apologise after he left a 22lb (10kg) Hello Fresh grocery parcel on top of a baby who was left outside to sleep in a pram.

The child’s mother had left her sleeping baby in a pram outside her house in Sweden when the large Hello Fresh package was dumped on top of the infant.

It is common to leave your child sleeping in a pushchair outside in Scandinavian countries, even in cold weather as they believe that it brings health benefits to the child.

The mother said in an Instagram post: ‘Congratulations, you crushed a sleeping baby in its pram with a 10KG parcel and have no shame. Thank God the baby is OK! Never again!’ 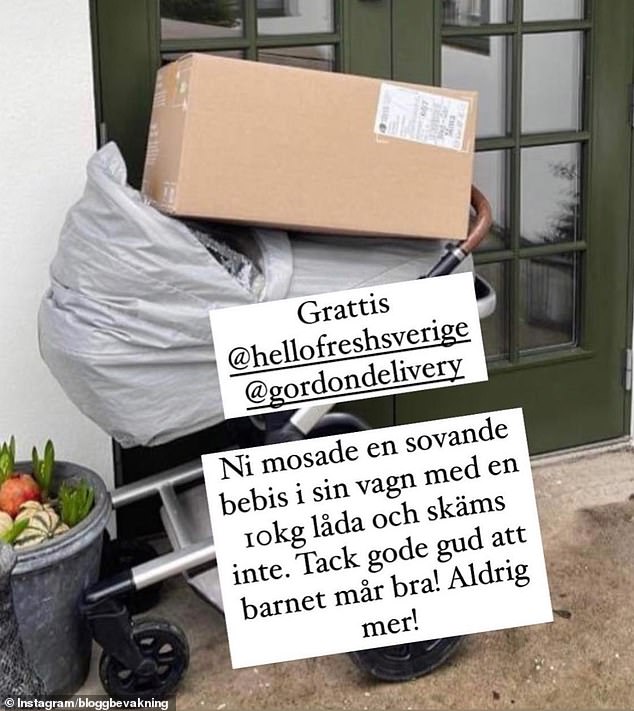 Social media blogger Camilla Gervide brought attention to the situation on her website Bloggbevakning and said that the mother had complained to Gordon Delivery, the firm responsible.

It was said that the mother was initially offered  250 Swedish kronor, equivalent to £20, in compensation.

Mikael Sahlsten, a spokesman for the business, told the Aftonbladet newspaper that the driver wanted to leave the parcel in a dry area and therefore thought the pram would be more suitable.

He added that the driver did not see the sleeping baby and was ‘very sorry’ about the situation. The delivery driver then went back to the house to apologise, bringing the mother flowers and chocolate.

The mother wrote in another Instagram post that she had been given two free deliveries due to the incident, and that the driver had been ‘almost in tears’ on her doorstep.