New York: Environmentalists are expressing alarm over an increasing number of dead dolphins that have washed ashore on Mauritius after a Japanese ship ran aground last month, spilling oil into the famed blue lagoons off the Indian Ocean island.

Greenpeace said on Friday that 39 dead dolphins had been found since the ship struck a coral reef on July 25, spilling 1000 tonnes of fuel oil into the sea. A government report said that as of Thursday the toll was 26 dead melon-headed whales — which are members of the dolphin family — as well as one bottlenose dolphin. 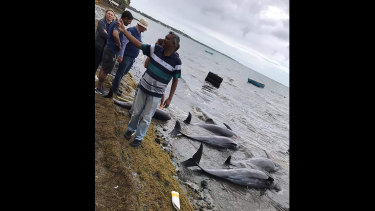 In this photo supplied by Greenpeace, dolphins lay dead on the shore on the Indian Ocean island of Mauritius. Credit:AP

The deaths — which have been increasing in recent days — have added to growing concern that the spill could be disastrous for Mauritius, whose lagoons, lush tropical jungles and mountains attracted 1.3 millions visitors last year.

Greenpeace said that an urgent investigation was needed to determine whether the oil spill was killing the marine mammals. The organisation said that the dead dolphins had not eaten and were under stress.

Local fishermen have taken to banging iron bars together to create "a sonar wall" to prevent more animals from stranding on the shore, Greenpeace said. 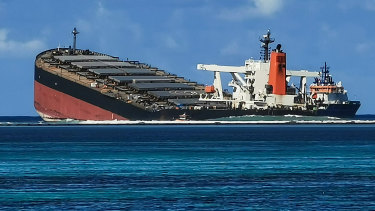 The MV Wakashio bulk carrier vessel sits partially submerged in the ocean after running aground close to Pointe d’Esny, Mauritius.Credit:Bloomberg

"This is a deeply sad and alarming day for the people of Mauritius and for its singular biodiversity," Happy Khambule, a senior climate and energy campaign manager at Greenpeace Africa, said in a statement on Wednesday. He said that Greenpeace had urged the authorities to "carry out a swift, transparent and public autopsy on the bodies collected."

The Wakashio, a Japanese-owned but Panama-flagged bulk carrier, had been carrying 200 tonnes of diesel and 3800 tonnes of fuel oil when it ran aground off the southeast coast of the tiny island nation. The crew was rescued but the ship remained at sea for nearly two weeks, as the authorities deployed a 550-metre-long fence around the vessel and hundreds of booms. They initially said no spill had been detected.

But bunker oil leaked from the ship on August 6, and the vessel broke apart on August 15, according to Tokyo-Mitsui OSK Lines, Ltd., the company that chartered the ship. Three days later, two of the ship's officers were arrested by the Mauritian authorities and charged with unsafe navigation, the company said.

The authorities declared a "state of environmental emergency" and said they were working with experts from France, Japan, India and the United Nations to contain the spill. 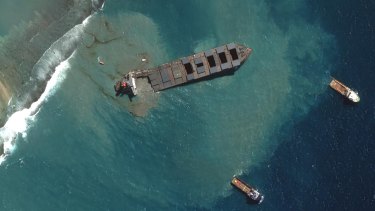 This satellite image provided by 2020 Maxar Technologies shows the MV Wakashio, a bulk carrier ship that recently ran aground off the southeast coast of Mauritius.Credit:AP

But many Mauritians said the government was not prepared for such a catastrophe, even though the country had been the site of at least three shipwrecks in the past decade.

Mauritius, more than 1,200 miles (1900 km) off Africa's eastern coast, sits in the path of trading routes that link Asia to Africa and Latin America. The Wakashio, a 984-foot-long (300 metre) vessel built in 2007, had been on its way to Brazil from China when it ran aground more than a mile off Mauritius, according to Marine Traffic, a tracking service.

In the days that followed the grounding, the authorities deployed only a few hundred meters of booms, environmental experts said, which was not enough to contain the spill.

Residents of Mauritius responded on their own, using makeshift booms of fabric and sugar cane leaves to contain the spill, and plastic bottles to clean up the slick. They also scrubbed beaches and raised awareness online about the extent of the damage. 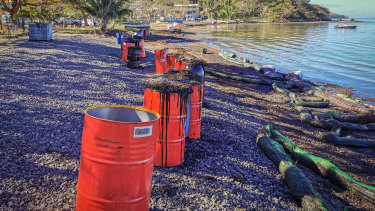 Véronique Couttee, a conservation biologist originally from Mauritius, said the spill had united residents in anger over the government's response to the disaster, which she said was alarmingly slow.

"I've never seen my country more unified because we realise we all live in one ecosystem and protecting it is very important," she said.

She questioned why there weren't more stringent rules to protect the island from international shipping, given how dependent the country is on fishing, recreation and tourism. Even before the spill, Mauritius' economy had been battered by the cancellation of international flights amid the coronavirus pandemic.

"It's been incredibly heartbreaking for me and all other Mauritians," Couttee said. "The whole livelihood of a community depends on this area."

Tokyo-Mitsui OSK Lines said that it had dispatched employees and equipment to clean up the spill and would "continue to work with the relevant authorities of Mauritius and Japan to mitigate the situation as soon as possible together with the shipowners."

Greenpeace has called on the ship's owners and operators to take full responsibility for the spill and to pay for current and future damages, including lost livelihoods and environmental costs.