TV HISTORIAN David Starkey has been slammed for claiming “slavery was not genocide” as “there wouldn’t be so many damn blacks”. 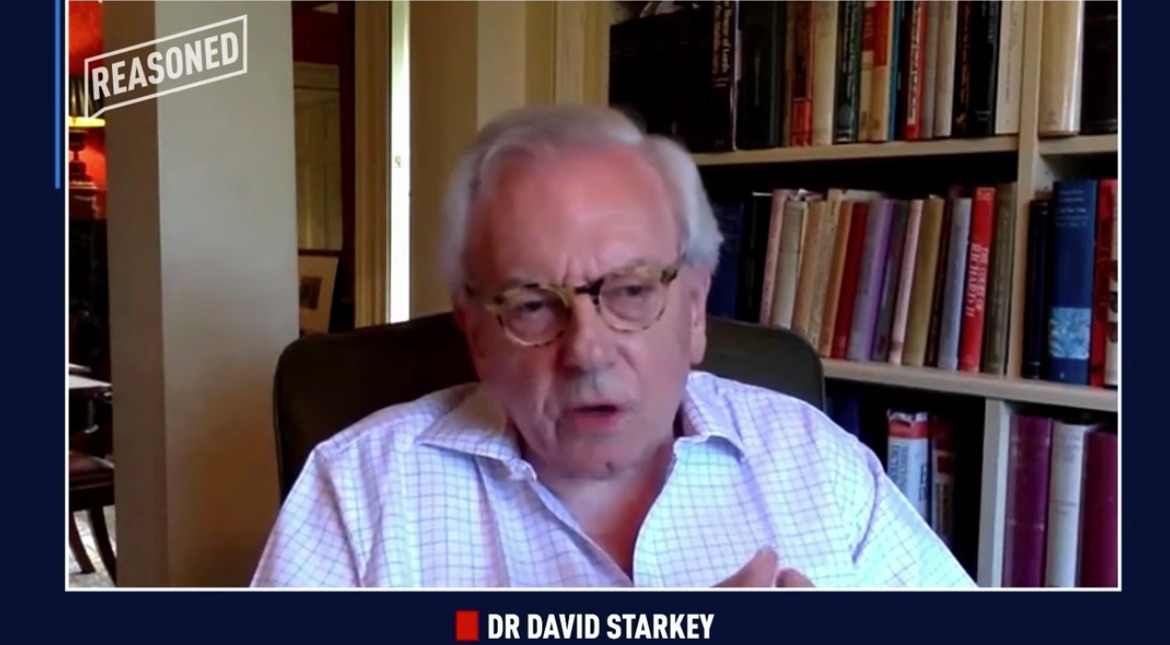 He described BLM as “wholly and entirely a product of white colonisation” and its activists “not culturally black Africans”.

He wrote on Twitter: “We are the most successful multi-racial democracy in the world and have much to be proud of.

“But David Starkey’s racist comments (“so many damn blacks”) are a reminder of the appalling views that still exist.”

The Tudor expert and TV personality made the assertions during a chat with activist Darren Grimes.

He appeared to argue slavery wasn’t ethnic cleansing as not all slaves died.

And he also seemed to link slavery to positive aspects of globalisation in an astonishing hour-long interview.

Dr Starkey was blasted as “repugnant” and “ill-informed” after stating that much white support of the Black Lives Matter movement was ignorant.

Speaking to 26-year-old Grimes on his YouTube channel Reasoned, Dr Starkey said: “Slavery was not genocide – otherwise there wouldn’t be so many damn blacks in Africa or in Britain would there? An awful lot of them survived.

Cambridge-educated Dr Starkey argued that the British Empire was “generally speaking, in most ways, actually fruitful”.

“There were downsides,” he belatedly added.

“As for the idea that slavery is this terrible disease that dare not speak its name.

“It only dare not speak its name because we settled it 200 years ago,” he said – referring to the abolition of slavery in 1833.

Dr Starkey then appeared to argue that Roman Catholics had suffered just as much as black slaves.

“We don’t normally go on about the fact that Roman Catholics once upon a time didn’t have the vote and weren’t allowed to have their own churches, because we had Catholic emancipation,” he ranted.

“Do you know what, we had Catholic emancipation at pretty much the exact same time we got rid of slavery – in the 1830s – we don’t go on about that.”

He also went on a rant about the campaign to teach colonisation in schools, and said if black Brits moved back to Africa they would die.

Dr Starkey raved: “We cannot decolonise the curriculum, because you Black Lives Matter are wholly and entirely a product of white colonisation.

“You are not culturally black Africans.

“You would die in seconds if you were dumped back in black Africa, you wouldn’t know how to cope.”

He tried to claim that the same white people who support the BLM movement were the people “who work themselves up into a lather about leaving the European Union”.

Dr Starkey added: “These are the people who tie themselves in knots despite the fact they have lots of money, live in big houses, drive big cars.

“They get wildly excited about extinction. It’s a form of upper class and middle class arrogant patronage.”

Twitter users blasted the TV historian for his “racist” opinions. 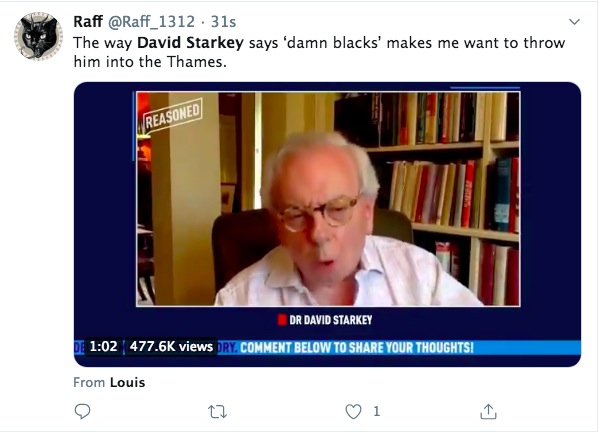 Miki Clem Fandango raged: “David Starkey proving yet again, that arrogance and a toffee nosed accent, are not automatic indicators of intelligence.

“Look up the meaning of the word genocide, you snot nosed, repugnant racist.”

“He and Darren Grimes probably wish the empire had finished the job.”

And Alex argued: “It’s truly horrific what David Starkey said regarding slavery and the fact that he wasn’t challenged by Darren makes him even more complicit in his overt racism and white supremacist rant.

“Neither of them should ever have a platform again.” 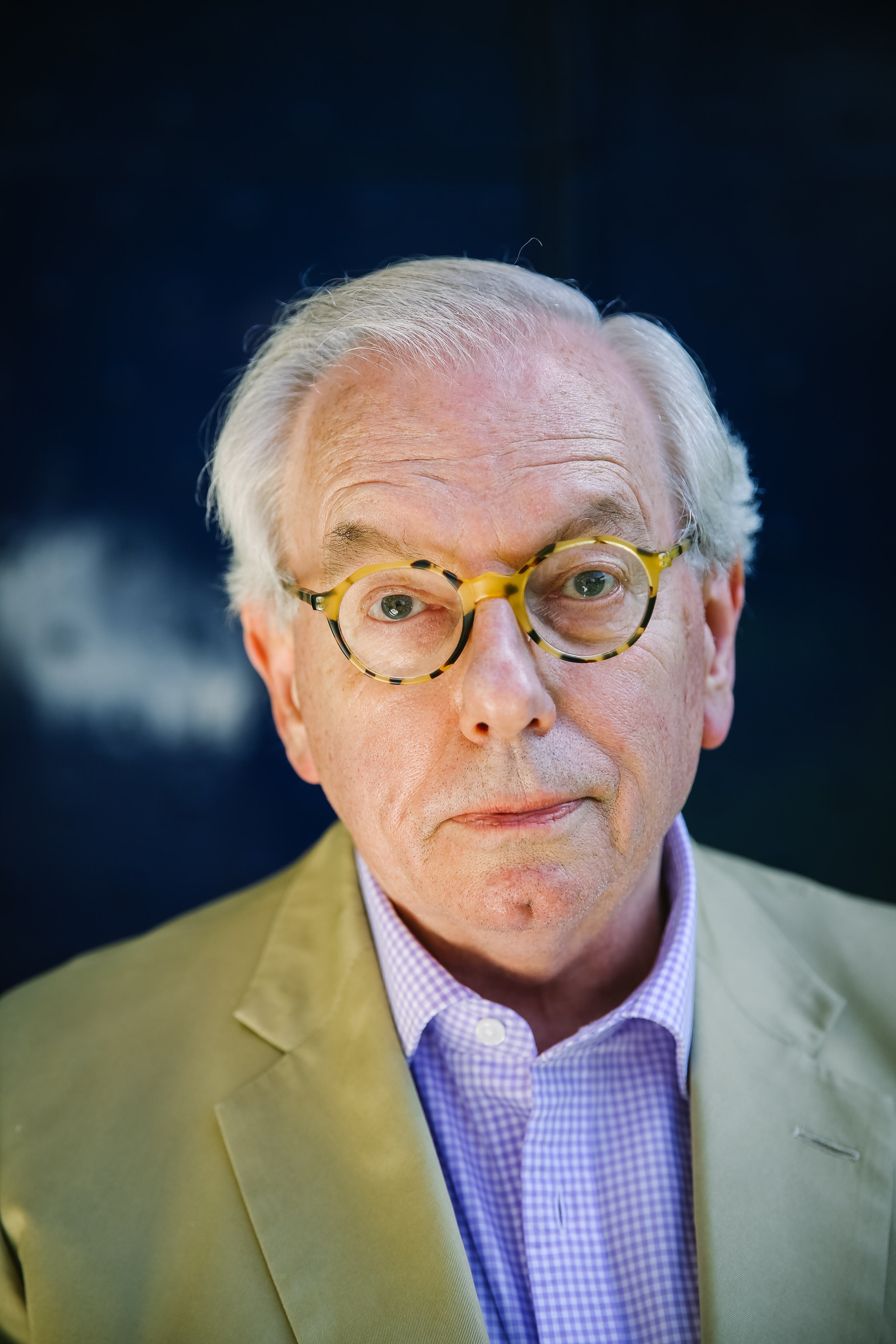 It is not the first time Dr Starkey has been accused of racism.

In 2015, the historian was removed from a promotional video at Cambridge University after complaints from students.

They cited a 2011 Newsnight interview in which he said: “A substantial amount of the chavs have become black.

“The whites have become black; a particular sort of violent destructive, nihilistic gangster culture has become the fashion.”

He also came under fire for comparing the NHS’s handling of coronavirus to the child abuse scandal that rocked the Catholic church.

He accused health bosses of working to “protect the institution not the patient” in an outspoken interview about the pandemic.

Dr Starkey has previously retorted: “I shall reserve the right to comment freely but without recrimination.”