Daily Covid admissions rise for 7TH day in a row and cases jump by 56% in a week with 71,000 new infections

Government dashboard data shows there were 71,259 new confirmed infections over the past 24 hours, the highest in over a month and up 56 per cent on last Thursday.

Cases have been climbing since last Wednesday which is thought to be due to a combination of lifting all restrictions and the rise of a more infectious version of Omicron.

Latest hospital data shows there were 1,406 daily virus admissions on March 6, up a third compared to the previous week and the seventh day in a row they have risen week-on-week.

The Government’s Covid advisers are struggling to work out why hospital admissions are tracking rising cases when normally there is a fortnight lag between infection and severe illness.

There are a number of theories, including that the central testing scheme itself has been slower to pick up the recent increase in cases because it is being scaled back as part of the ‘living with Covid’ strategy.

Others have suggested it may be the early signs of booster vaccine immunity waning, following their initial roll out in September. Whitehall sources they are not ‘overly worried’, although they were keeping an eye on the numbers.

A fourth booster shot is set to be rolled out later this month to over-75s, care home residents and people with weakened immune systems, who are most vulnerable to the virus.

Meanwhile, there were another 142 Covid deaths registered today in a 27 per cent drop compared to last Thursday. It brings the seven-day average number of fatalities to 104. 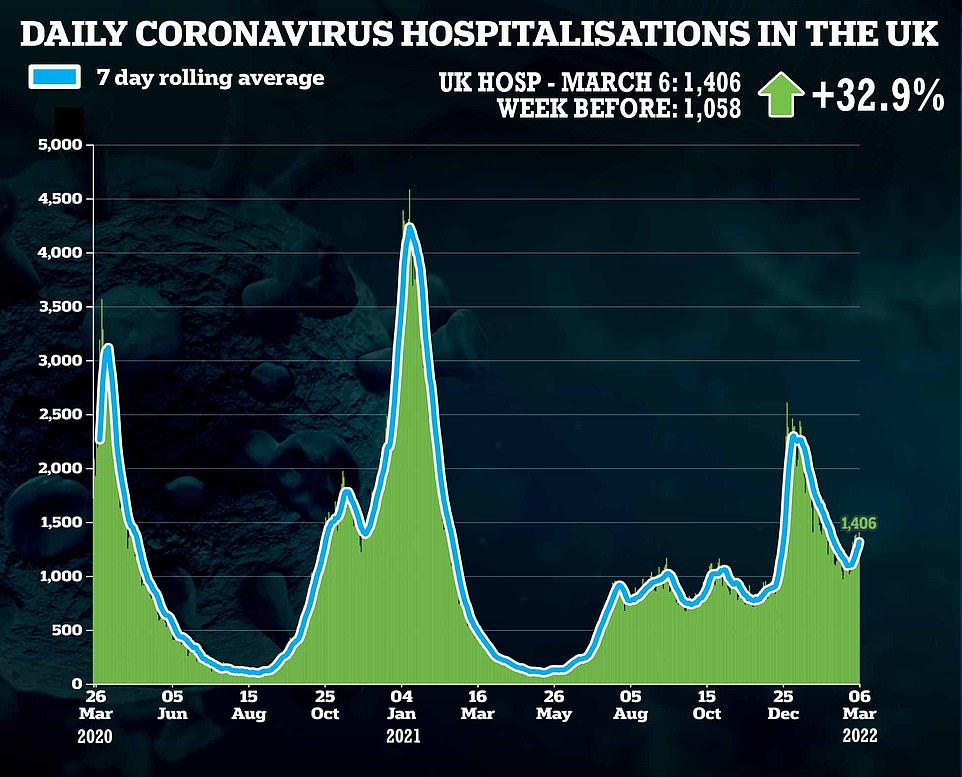 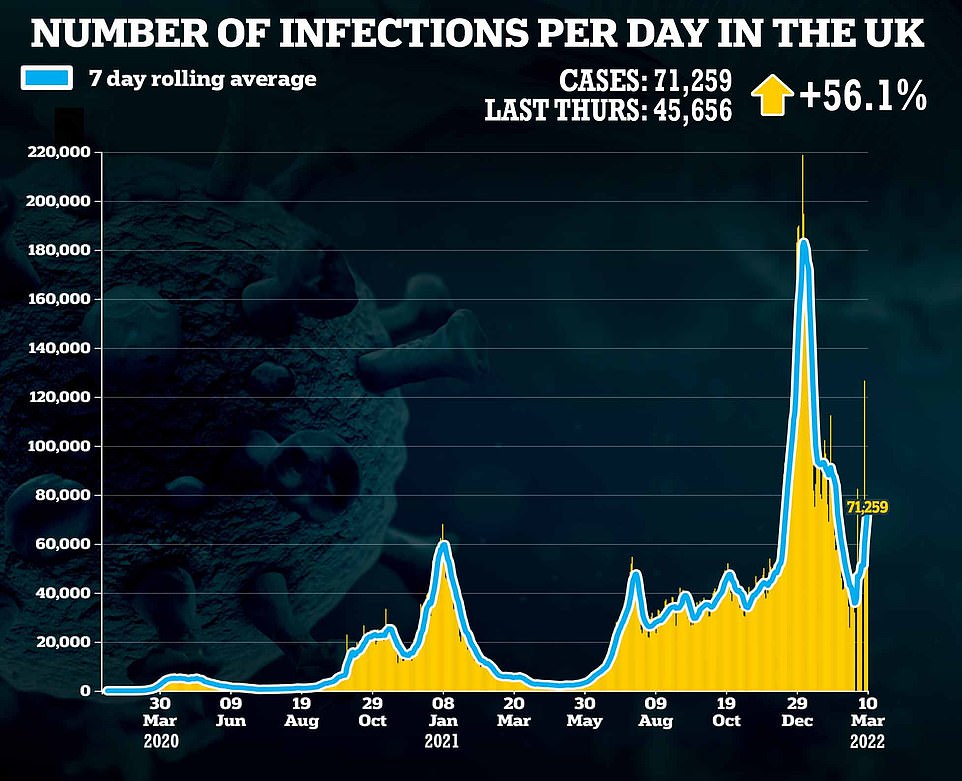 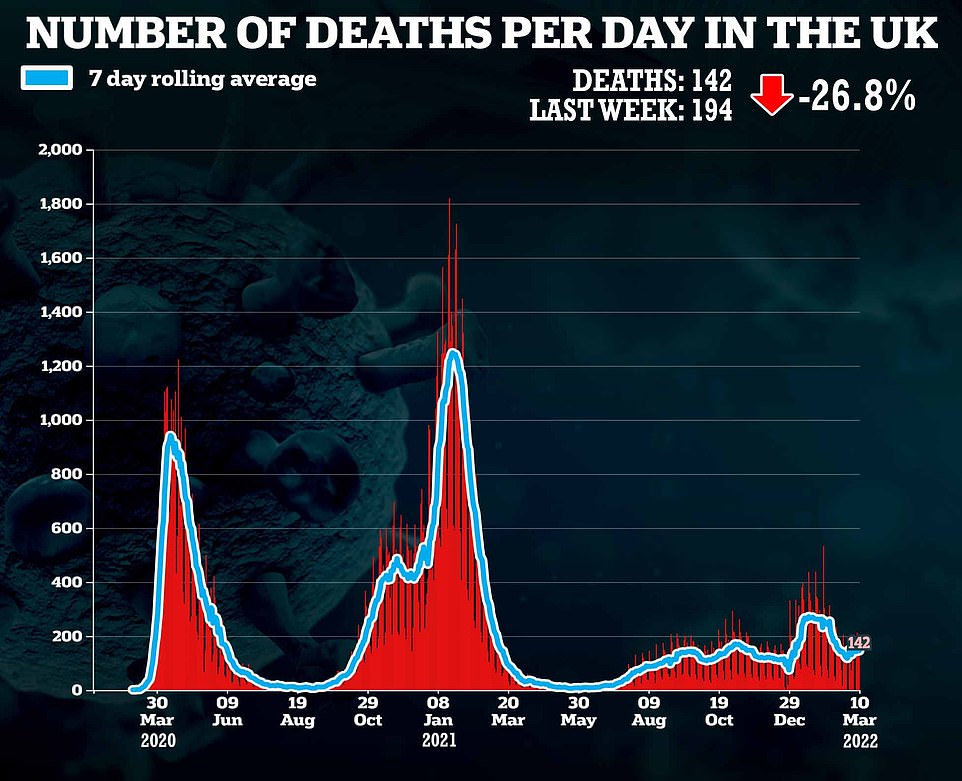 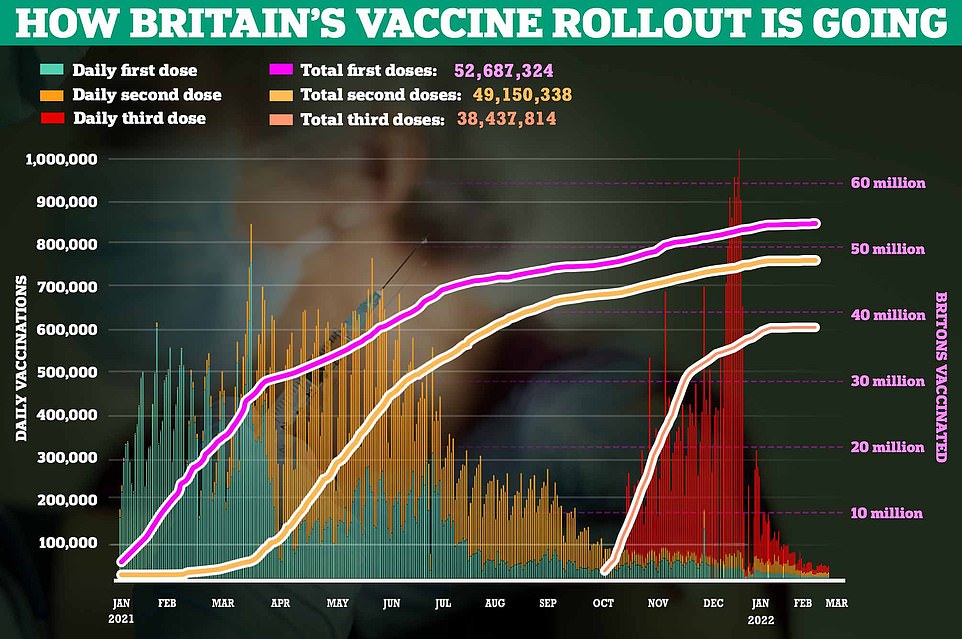 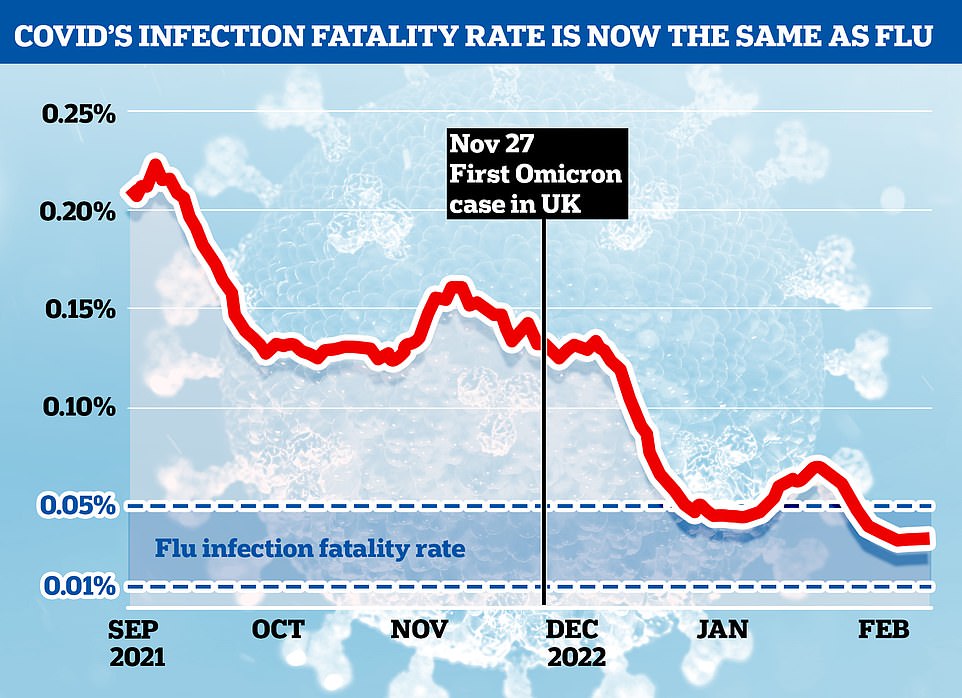 The above graph shows the infection fatality rate for Covid in England (red line). Since Omicron became dominant in the UK it has dropped dramatically and is now around the same level as flu (blue area). Scientists today said it was certainly possible that Covid is now as deadly as flu. But they warned future variants could change the calculation

Government figures indicate the virus had a mortality rate of around 0.2 per cent before the ultra-transmissible strain erupted onto the scene. But this has since plunged seven-fold to as little as 0.03 per cent, meaning it kills effectively just one in every 3,300 people who get infected.

For comparison, seasonal influenza’s infection-fatality rate (IFR) sits between 0.01 and 0.05 per cent, suggesting that the two viruses now pose a similar threat.

Professor Paul Hunter, an infectious diseases expert from the University of East Anglia, told MailOnline it meant that Covid could actually be even less deadly than the flu. Although, he warned another variant could reverse the progress.

Britain’s Covid outbreak may be rebounding because Vladimir Putin’s invasion of Ukraine has pushed the virus out of the headlines, scientists say.

Infections have been on the rise in the UK for a week straight, with the country now averaging 50,000 cases per day compared to around 35,000 on Freedom Day in late February.

But Covid — which has dominated the news cycle for almost two years — has been dwarfed by the war in Ukraine, which has gripped the world and produced harrowing images of civilian casualties on a daily basis.

The crisis is causing Britons to act ‘less carefully… now the virus is off the news essentially’, according to Professor Gary McLean, an immunologist at London Metropolitan University.

But he added that Ukraine was just one piece of the puzzle. ‘It’s almost like a perfect storm of several things has resulted in reduced care even though the virus is circulating at still high levels and immunity is slowly waning,’ he told MailOnline.

But he warned people were already changing their behaviour before Russia’s invasion, as No10’s rhetoric pivoted and ministers began stressing that we need to learn to live with Covid.

Cases are also thought to be rising due to a mix of restrictions being lifted and the rise of a more infectious sub-variant of Omicron known as BA.2, which is now the UK’s dominant strain.

Infections have been on the rise in the UK for a week straight, with the country now averaging 50,000 cases per day compared to around 35,000 on Freedom Day in late February. Hospitalisations have also been rising and in the South West of England have now eclipsed levels at the height of the Omicron wave.

Ministers are understood to not yet be concerned by the spike, given that two-thirds of over-12s have already had their booster vaccine. Fourth jabs are set to be rolled out to over-75s, care home residents and people with weakened immune systems — who are most vulnerable to the virus — later this month.

Dr Raghib Ali, an epidemiologist at Cambridge University who advised No10 throughout the Omicron wave, said it was ‘unlikely’ that there would be a ‘large’ spike in hospitalisations or deaths.

Even though NHS Covid admissions shot up to around 2,500 per day at the height of the wave, a large proportion were ‘incidental’ cases. Intensive care rates barely budged and fatalities stayed way below levels seen during bad flu winters.

Scientists have credited the build-up of immunity after repeated waves of the virus, the vaccine rollout and the fact Omicron is inherently milder than older forms of the virus.

England has been somewhat of a European outlier since the Covid vaccines first started to be rolled out.

It dropped most restrictions last summer despite high levels of Delta circulating and stayed open during the Omicron wave when many in the EU reimposed draconian lockdowns.

While at times it has meant England has had consistently high infection rates, scientists believe the strategy has given the country an unusually high level of immunity.

A rapid and successful booster rollout combined with the mild Omicron wave helped severe the link between infection and severe illness even more.

These factors have given ministers the confidence to ease all restrictions in England, taking the country out of economically-crippling restriction cycles and moving into a new phase of ‘living with Covid’.

MailOnline compared estimates on the number of people catching Covid every day in England against deaths registered two weeks later — roughly how long it takes for patients to succumb to the illness.

Infection figures were taken from the Office for National Statistics’ gold-standard infection survey, which randomly swabs tens of thousands of people every week to gauge how prevalent the virus is across the UK.

Fatality figures were also taken from the ONS’s weekly death analysis, that looks at the number of death certificates in which the virus was mentioned.

Out of the 52,000 estimated new infections a day in early September, when the Delta variant was still dominant, an average of 110 deaths involving the virus were being registered a fortnight later.

This equated to an infection-fatality ratio of around 0.2 per cent, or one in 500 infections resulting in a death.

The most up-to-date IFR in the analysis — based on an estimated 245,000 people getting infected every day on and 83 deaths a fortnight later — stands at just 0.03 per cent.

For comparison, the IFR was thought to be above one per cent at the start of the pandemic when the novel virus first hit the human population and there was no immunity.

Professor Hunter told MailOnline: ‘The recent data suggests Covid is now less deadly than flu, but there remains uncertainty about the impact of future variants.

‘This is mainly down to immunity, though Omicron (possibly excluding BA.2) is also less virulent.’

When asked about a similar analysis done by the Financial Times, Dr Ali said: ‘Is Omicron the same as flu? No. But the vaccines have made the risks to the individual very similar.’

Real-time IFR can vary drastically in every nation based on previous immunity, prevalence of obesity and other medical conditions, and the population age structure.

Government dashboard data shows vaccine uptake is high across the UK, providing what has been described as a ‘wall of immunity’ against the virus.

About 85 per cent of over-12s in Britain have already got two doses of the Covid vaccine, figures show.

While 66 per cent have also got the booster jab, although among the over-70s who are most at risk from the virus uptake rises to above 90 per cent.

The NHS is currently preparing to roll out a fourth Covid jab for the over-75s and the most vulnerable, including care home residents and everyone over 12 with a weakened immune system. The rollout is set to begin in just a week and a half.

Even more groups could be invited in the autumn to raise protection ahead of winter, ministers have hinted.

A total of 30million Britons — or half the population — have also already been infected with Covid, according to No10’s top scientific advisers, in another boost for immunity levels.

But despite these high immunity levels, Covid infections have risen across the country consistently for an entire week.

Yesterday marked the highest daily tally of cases in a month, with Britain recording 67,000 new infections.

Scientists are stumped as to what is behind the rise, arguing easing restrictions, the more infectious version of Omicron and even Vladimir Putin’s invasion of Ukraine may all be to blame.

Hospitalisations have also been rising for the past seven days. They are up almost 10 per cent in a week across the UK, Government dashboard data shows, with the average now around 1,200 admissions a day.

And in the South West of England have now eclipsed levels at the height of the Omicron wave.

However, less than half of Covid patients in the country’s hospitals are primarily being treated for the virus with most having been admitted for another illness or injury, such as a fall.

Experts jumped on the month of falling cases to declare that the worst of the pandemic was over, with a similar downward trend seen in death figures.

Even the gloomiest scientists say the days of more than 1,000 deaths a day, recorded at the peak of the pandemic last winter, are now consigned to history.