Cyclone Fani struck the coast of the state of Odisha at approximately 8am on Friday, after building up strength in the Bay of Bengal. Footage shows the category four storm making landfall in the tourist town of Puri, with trees swaying wildly in the heavy wind and rain. A roaring sound can also be heard in the background from howling gusts, as power lines swing back and forth. The video was posted to Twitter captioned: “The sound and the fury: Here’s what the landfall at Puri by #CycloneFani actually looked like… “.

No casualties have yet been reported.

The tropical cyclone brought winds gusting up to 124mph, bringing down trees and power lines in Puri.

Cyclone tracker Tropical Storm Risk placed Fani as a category four storm on the scale of one to five.

The storm is the strongest to hit India in five years and is now weakening, according to the India Meteorological Department (IMD). 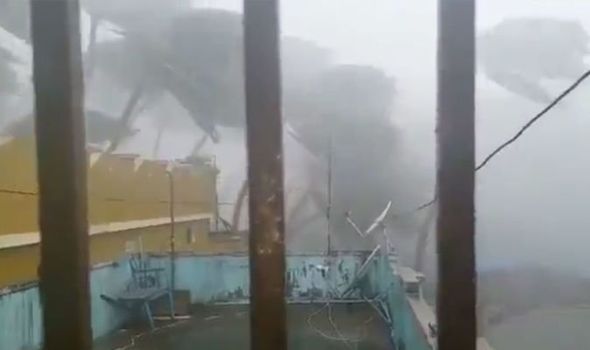 “No casualty has been reported so far.”

Electricity poles were torn down by winds in Bhubaneswar, with order to close the airports.

Schools and colleges in Odisha were also shut, with a major hospital in the city suffering extensive damage.

Anuradha Mohanty, a Bhubaneswar resident, told Reuters: “It was a massive cyclone, like many others our house is flooded.

“Boundary walls of houses around us have collapsed, trees have been uprooted.

“It is a panic situation.”

Odisha had evacuated more than a million people from the most vulnerable communities along the low-lying coast, Chief Minister Naveen Patnaik said on Twitter.

Hundreds of disaster management personnel were deployed in the state, and doctors and other medical staff were told to defer any leave until May 15.

In neighbouring Bangladesh to the north, authorities have begun moving 500,000 people from seven coastal districts, a government minister said.

The storm is due to hit Bangladesh late on Saturday and ahead of that, ports have been ordered shut, a government official said.