Commuting Britons are more likely to catch Covid while walking or cycling to work than on trains, buses or taxis, data suggests

Cyclists and walkers appear more likely to catch Covid than those who take a bus or car to work, data has suggested.

Office for National Statistics analysis shows those who work from home have been at a lower risk of Covid than people going into an office throughout the crisis.

But the likelihood of testing positive for coronavirus has varied depending on which mode of transport someone takes and how widespread the disease is.

The ONS found the odds of someone who walks or cycles to work getting Covid is now about 60 per cent higher than someone who works from home.

Britons who drive, get a lift from a colleague or friend or take a taxi appear to be at a 30 per cent higher risk. But public transport users were slightly less likely, the report revealed.

Statisticians did not give a reason as to why taking public transport was linked to a lower risk of testing positive for Covid than travelling by other means. It goes against the basic understanding of how the virus spreads, usually in confined spaces with little ventilation.

Trains, particularly the London Tube, and buses were flagged as potential hotbeds for the virus earlier in the crisis for those very reasons.

The ONS urged ‘caution’ over its findings, which it said were based on high confidence intervals due to the tiny number of people testing positive.

The number of participants in the study using public transport was also much smaller than those getting to work by other means, which may have influenced the results.

Regardless, experts told MailOnline travelling by public transport is ‘surely safer than it was’ previously because cases are now so low. 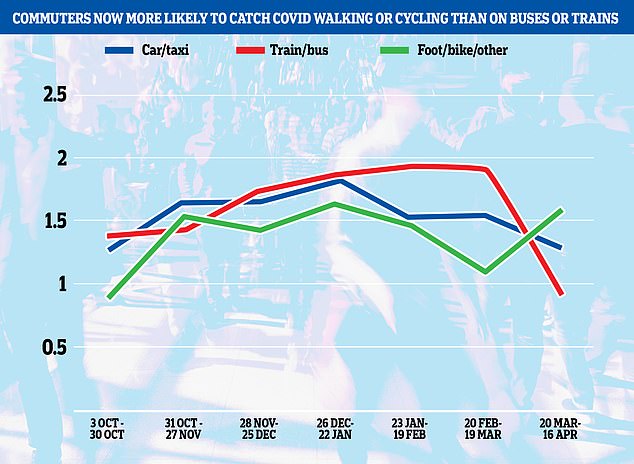 Cyclists and walkers appear more likely to catch Covid than those who take a bus or car to work, Office for National Statistics data has shown. Graph shows: Odds of catching Covid compared to homeworkers (one = equal risk)

The ONS report does not show whether people caught Covid on a given method of transport — the data shows if people became infected at any point and had commuted or worked from home.

The report found that, when compared to working from home, the risk of someone testing positive who travels to work by foot or bike was 59 per cent.

Fatigue continues to be the most common symptom of Covid, ONS data has shown.

The figures, released as part of the coronavirus (Covid-19) infection survey today, show fatigue was experienced by 36.8 per cent of all symptomatic people in England from December 1 to April 4.

It was experienced by 44.1 per cent of symptomatic people in Wales, 27.9 per cent in Northern Ireland and 36.6 per cent in Scotland.

But fatigue is still not counted on the NHS’s official list of coronavirus symptoms.

The data also showed that around half of Covid cases in England are asymptomatic.

This result was based on a sample size of 10,516 people who were sent a Covid swab between March 20 and April 16. Just 31 tested positive.

Those who went to work by train or bus were found to be 8 per cent less likely to test positive than people working from home.

But only 5,773 people were included in this group and just 10 were diagnosed with the virus, creating wide confidence intervals.

The ONS said that because of this, the risk compared to working from home could be as high as 90 per cent.

Riding in a train or bus was the most risky method of transport for every month bar one since the study started in October 3 last year.

During all of the UK nations’ various national lockdowns public transport was restricted for all but essential travel.

Even though the ban was lifted most recently on April 12, levels have still not bounced back to pre-pandemic figures, which is reflected in the ONS’ findings.

Employees were also told to work from home if possible, but that decision has now been left with employers to decide, despite vanishingly low infection numbers.

Professor Kevin McConway, emeritus professor of applied statistics at the Open University, told MailOnline it is nearly impossible to draw too many conclusions as to which method of transport is safest from the ONS’s dataset.

He said: ‘The interpretation is really, really difficult. That’s for two reasons.

‘First, there are huge confidence intervals (margins of statistical error) around these estimates, and that’s fundamentally because very few people in the ONS samples are testing positive these days.

‘There were only 10 people in the ONS sample who travelled by bus or train and tested positive in the March to April 16 period. You’re never going to be able to get precise estimates from 10 positive tests.’

The second reason is there are differences between people who use different means of transport to work apart from their transport means, he said.

Professor McConway added: ‘So we can’t even be sure that the means of travel actually causes any difference at all to the risk.

‘My guess would be that it probably does, but these results can’t show that.

‘So, for instance, the data can’t tell you whether someone who currently travels by bike would be safer if they travelled by train or bus instead, because we don’t know enough about what causes the observed differences in risks.

He said travelling by public transport is ‘surely safer than it was’ because cases are now so low.

But he warned that as offices open up again and people return to work, it is possible trains and buses would become crowded again and the risk of transmission could rise.

Dr Joe Grove, a virologist at University College London, told MailOnline: ‘It’s difficult to think of a mechanism by which the risk associated with bus and train would drop whilst other modes of transport stayed the same.

‘What is clear is that the national risk continues to drop — irrespective of what you’re doing — thanks to lockdown and vaccination, and we should keep up the hard work and be optimistic for the future.’