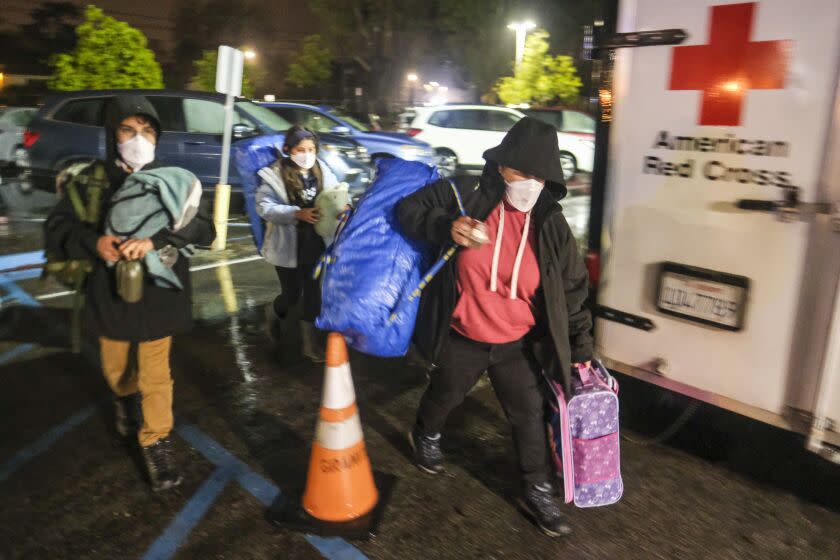 A toddler crushed by falling trees. A 5-year-old swept away by floodwaters before his mother's eyes and still missing. Three bodies recovered from inside or near submerged vehicles on a rural stretch of freeway.

As a series of storms continues to pummel California, officials say the havoc is a testament to the unexpected ferocity of extreme weather. By Tuesday evening, at least 17 people have been killed in circumstances directly related to a train of atmospheric rivers that has inundated the state since New Year's Eve, bringing the death toll from the storms higher than the last two wildfire seasons combined.

"What we're seeing is absolutely a result of weather whiplash," said Brian Ferguson, deputy director of crisis communication at the California Office of Emergency Services.

The deadly weather is foiling evacuation plans and straining the state's aging infrastructure as strong winds topple power lines and fast rising waters overtop levees. Officials say the storms highlight the way in which climate change is increasingly catching people off guard as the state swings from one extreme weather event to another, leaving little time to prepare.

"The pure volume of water we've received in such a small period of time after having no water for a number of years puts stress not just on us as human beings, but our biological infrastructure all across the state," Ferguson said. "Part of it that we cannot ignore is that our environment is rapidly changing around us."

Among those changes are record-dry conditions that have sapped the state's trees of moisture and made them more prone to snap and fall, he said. That's especially pertinent in an area like Sacramento, sometimes referred to as "the City of Trees," which has seen multiple tree-related fatalities in the storms.

But there's also an element of human behavior that can make the storms more deadly. In a state that spends much of its time preparing for drought and wildfires, "there is a sense that it's rain, it's the weather, it's not a danger," Ferguson said.

"We also haven't had a lot of practice," he added. "We have so much messaging on wildfires and earthquakes … but this is the first time we've had a flood like this in five years, so there is some muscle memory and support for local communities that we need to do to help the public understand what they can do to help keep themselves safe."

"We've had less people die in the last two years of major wildfires in California than have died since New Year's Day related to this weather," Gov. Gavin Newsom said during a news conference Tuesday. "These conditions are serious, and they're deadly."

Indeed, that same rapidity is repeating itself with the floods. Toward the end of 2022, officials forecast a rare third appearance of La Niña, signaling another dry winter in much of California. The arrival of the brutal series of atmospheric rivers came as something of a surprise.

State climatologist Michael Anderson at the Department of Water Resources said the high pressure driving La Niña flattened toward the end of December, while the strength of the jet stream — the fast-flowing air currents in the upper level of the atmosphere — increased off Asia, which "pushed open that storm door, allowing this series of storms to really plow through."

"It's still a work in progress to understand large transitions like that that happen suddenly, and understanding this kind of two-week to four-week window, how to better forecast those transitions, because as you see they’re really important," he said. "If we had a better handle on that, we could give people a little more lead time, heads-up."

There can also be confusion during emergency events. In the Sacramento County area of Wilton, near the Cosumnes River, officials on New Year's Eve issued an evacuation warning around 1:00 p.m. advising residents to "leave the area now." Two hours later, they issued a shelter-in-place order due to impassable roads. Around 9 p.m., they said a levee failure was imminent and told residents to seek higher ground.

Such decisions are typically made at county levels by people who have the best handle on local conditions, Ferguson said. But many counties use different systems such as CodeRED or Everbridge, some of which require people to opt in. Such systems may offer little help for people without cellphones or internet access, or for people who do not speak the area's predominant languages.

Sacramento County Office of Emergency Services spokeswoman Brenda Bongiorno said in an email that the county uses the Smart911 system to provide emergency alerts by email, phone and text, and that wireless emergency alerts with a special tone and vibration were also sent during the New Year's Eve storm. The county also notified local media and posted information on its website and social media, she said.

But in the days that followed, several people, including a 45-year-old man, a 57-year-old woman and a 61-year-old woman, were found dead inside or next to submerged vehicles along Highway 99 and Dillard Road, which had been inundated with floodwaters after levee breaches on the Cosumnes and Mokelumne rivers.

"In the case of flooding on Dillard Road, the County anticipated the flooding due to the levels of the Cosumnes and Mokelumne rivers, and closed Dillard Road Saturday afternoon in advance of any major flooding on New Year’s Eve," Bongiorno said.

She also noted that all of the levees that breached along the Cosumnes River are on private land and are maintained by a small reclamation district. Reclamation District 800 member Mark Hite told The Times last week that the budget for its 34-mile stretch of the river is $500,000 a year.

"Reclamation District 800 does not have means to bring the levee system up to a higher flood standard," Bongiorno said. "Further, no amount of levee work can control flooding on Hwy 99. Highway 99 is low and subject to flooding."

There are other connections to wildfires too, including increased hazards in wildfire burn scars, which can be waxy and water repellent. On Monday, all of Montecito was evacuated, as were portions of Santa Barbara County near the Alisal fire burn scar.

Anderson, the state climatologist, said the evacuation in Montecito was largely due to the types of hazards that can come with steep terrain as well as wildfire burn scars.

"When you get heavy rain waves like this, it makes the land more prone to landslides and debris flows," he said. "And to make sure that we don’t repeat the incidents after the Thomas fire, they wanted to evacuate people from that area."

In January 2018, mud and debris loosened from the Thomas fire burn scar plowed through Montecito, killing 23 people and destroying more than 100 homes.

Anderson said officials are working with the scientific community to get better at forecasting atmospheric rivers. Among those efforts are reconnaissance flights, which include dropping instrumentation into the weather systems to capture data on temperature, moisture, wind and pressure levels to better understand how they work and develop, said Julie Kalansky, deputy director for the Center for Western Weather and Water Extremes at Scripps Institution of Oceanography.

But Kalansky said the challenges of seasonal forecasting shouldn't preclude the state from being prepared. California has the highest year-to-year variability between wet and dry years of any state in the continental U.S., she said.

"California knows, the state is aware, that we are always susceptible to big storms and potential flooding," she said, and should ensure that "there are systems in place and processes in place when you see something like this coming."

The National Weather Service on Tuesday identified nearly two dozen river sites in the state that had reached flood or monitor stage as the rain continued to pour, indicating at least several more days of potential danger as additional storm systems had yet to arrive.