Cruise ship Viking Sky got into difficulties off the coast of Norway on Saturday as it hit stormy conditions prompting the evacuation of some its passengers. In the shocking footage, the huge ship is seen swaying side to side causing furniture to slide around the inside of the cruise ship. Part of the ceiling also crumbles on passengers, with the cruise ship having to send out a mayday call after losing engine power.

The weather difficulties prompted the start of an operation to airlift 1,300 passengers and crew from the vessel in high winds.

A spokeswoman for Viking Cruises said the ship was safely travelling to the city of Molde, on Norway’s west coast, at 10am local time on Sunday under its own power.

There are still 436 guests and 458 crew members on board following the end of the evacuation, the operator said.

Some 479 passengers who were airlifted from the vessel are back on shore with the first due to fly home on Sunday. 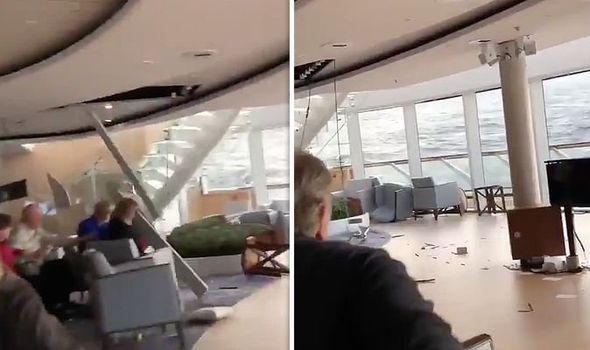 Throughout all of this, our first priority was for the safety and wellbeing of our passengers and our crew

A statement said: “Throughout all of this, our first priority was for the safety and wellbeing of our passengers and our crew.”

The operator’s chairman Torstein Hagen told Norway’s VG newspaper the events were “some of the worst I have been involved in, but now it looks like it’s going well in the end and that we’ve been lucky”.

Around 200 Britons were aboard the cruise ship when the vessel encountered problems, but helicopters were only able to take 15 passengers at a time.

Derek and Esther Brown from Hampshire said the “whole boat was swaying, it was very rough”. Mr Browne told BBC Radio 5 Live’s Stephen Nolan: “We had a few people on stretchers, several with cuts, two with broken limbs, but fortunately we were alright.

“We were airlifted onto the helicopter which was quite a frightening experience.

“I’d never been in a helicopter before, there were a lot of high winds, hovering overhead and the winchmen came down and we were then collected up and so I shut up eyes as we arrived into the helicopter. And there were 15 of us for about a 20-minute ride.”

The Viking Sky was due to arrive in Tilbury in Essex on Tuesday.

A spokeswoman for the Foreign Office said: “We are in touch with Norwegian authorities and stand ready to help any British people who require our assistance”.