If you attend a demonstration and the person marching beside you throws a rock, who should be held responsible for the damage?

According to prosecutors at the US Justice Department’s Washington DC office, the answer is both of you, plus your friends at the march, plus some other protesters dressed in black, plus anyone else close by with the misfortune to be rounded up by police. 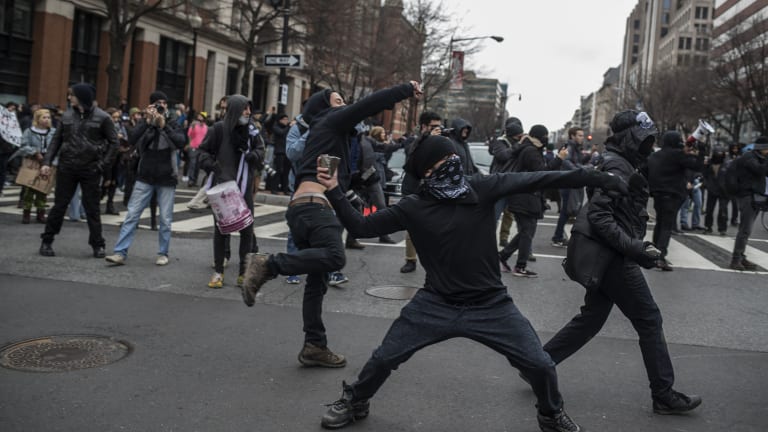 Rioters in Washington, DC, throw rocks during a protest on January 20, 2017 – inauguration day.

“We don’t believe the evidence is going to show that any of these six individuals personally took that crowbar or that hammer and hit the limo or personally bashed those windows of that Starbucks in,” admitted Assistant US Attorney Jennifer Kerkhoff at the trial of six people accused of rioting at Donald Trump’s inauguration on January 20, 2017.

Nonetheless, she said, they should be convicted of crimes punishable by up to 60 years in prison.

From the Women’s March on Washington to spontaneous demonstrations against the government’s proposed Muslim ban, and from Black Lives Matter die-ins to the Water Defenders at Standing Rock, Donald Trump’s presidency has been marked by mass protests.

Across the US, almost 60 bills have been introduced in Republican-controlled state legislatures since Trump’s election broadening the definition of rioting or increasing penalties for protesters found to have broken the law.

The J20 trial, as it has come to be known, is now part of a broader struggle over the right to dissent. 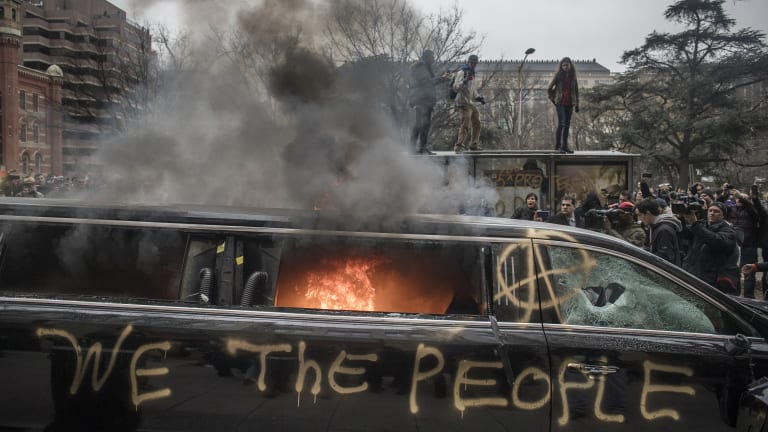 Protesters burn a limousine during the January 20 demonstrations against the inauguration of US President Donald Trump.

“What’s new about the J20 is not that a lot of people protesting got mass arrested, because we’ve seen that for decades. What’s alarming is that so many people were charged with felony conspiracy to riot, which is unprecedented,” says Traci Yoder, director of research and education at the National Lawyers Guild. “It seems like there was definitely an attempt to intimidate and frighten people.”

The US Attorney’s Office of the District of Columbia initially charged 194 people arrested en masse at the inauguration. After a jury found the first six defendants not guilty, prosecutors dropped charges against 129, to focus on a “core group” of 59 demonstrators, alleging that they participated in the destruction of property, were among the protest’s organisers, or engaged in “black bloc” tactics – dressing in black and wearing masks – to conceal their identities.

“We always saw this as an untenable charge, abhorrent to US and international standards,” says Amnesty International researcher Justin Mazzola. “It really is a test case, a bellwether case, to see what happens with the other 59, because without direct evidence of criminal responsibility you could be potentially sentencing innocent individuals who are just expressing their thoughts."

Elizabeth Lagesse and her fiance Michael Webermann are among the protesters still facing charges. They had just arrived from Baltimore when they were ‘kettled’ by police and confined on the street, on a freezing January day, for 10 hours, together with around 200 others. They wore dark clothes, not black, and carried pink outfits in their backpacks for the women’s march the next day. 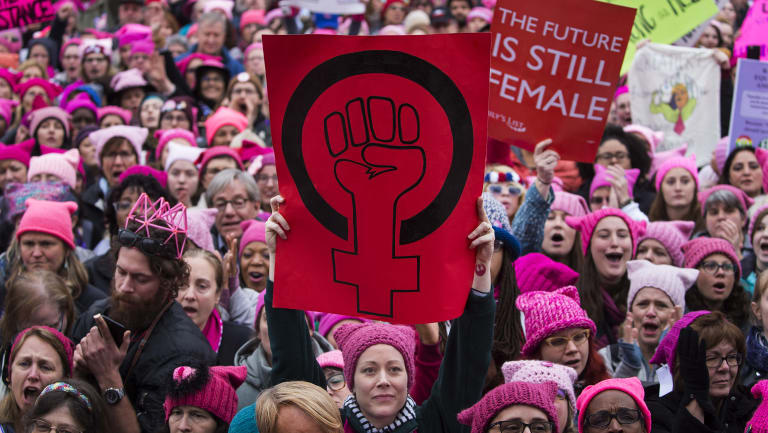 Lagesse is a postgraduate science student from a family of Trump-supporting Republicans. “They don’t agree with me, but they’re also completely flabbergasted by this whole thing,” she says.

Webermann is an environmental activist and founder of Better Eating International, an NGO promoting veganism. They deny organising the protests, and consider themselves anti-capitalists but hardly hardcore anarchists. Prosecutors do not claim they destroyed any property.

In theory, police responding to protests in Washington DC are constrained by the First Amendment Rights and Police Standards Act, which requires them to give demonstrators three warnings to disperse before arresting them for unlawful assembly. Officials have admitted that on inauguration day, officers did not abide by the act’s provisions.

Webermann says: “I’m not a conspiratorial or paranoid person, but the fact that they threw those protocols out of the window the day Donald Trump became President, and that they’re ridiculously over-charging people, and pursuing them … I think there’s no way to read it other than this is a chilling effect, to say ‘you protest in DC, don’t expect it to go so well'.” 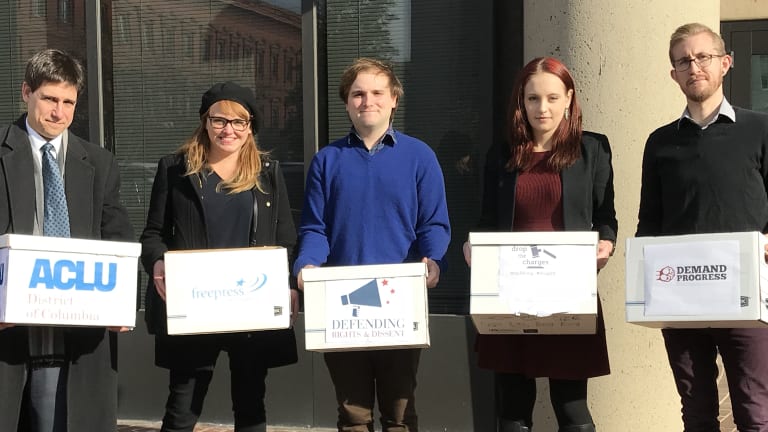 Michael Webermann and Elizabeth Lagesse, first and second from right, join Scott Michelman of the ACLU, far left, to hand in a petition urging the US Attorney’s office to drop charges against the accused in the J20 case.

Lagesse is one of six plaintiffs in a lawsuit brought by the American Civil Liberties Union that alleges police unlawfully arrested protesters, doused them with pepper spray, used excessive force including flash-bang grenades, concussion grenades and tear gas, and needlessly held them captive all day without providing food, water or toilet breaks.

She suspects one reason she still faces criminal charges is that if she is found guilty, it would make it easier for police to beat the civil suit.

“Police were using pepper spray, at times indiscriminately, and on people who posed no public safety threat and who were not disobeying any orders,” says Scott Michelman, senior staff attorney at the ACLU’s DC office, “including a whole group of people who were outside the area where they had detained protesters, all of whom were doing nothing more than shouting ‘let them go!’”.

In body camera footage played in court at the first criminal trial, one officer at the inauguration protests tells his captain that police have been “extremely wild” with the spray. 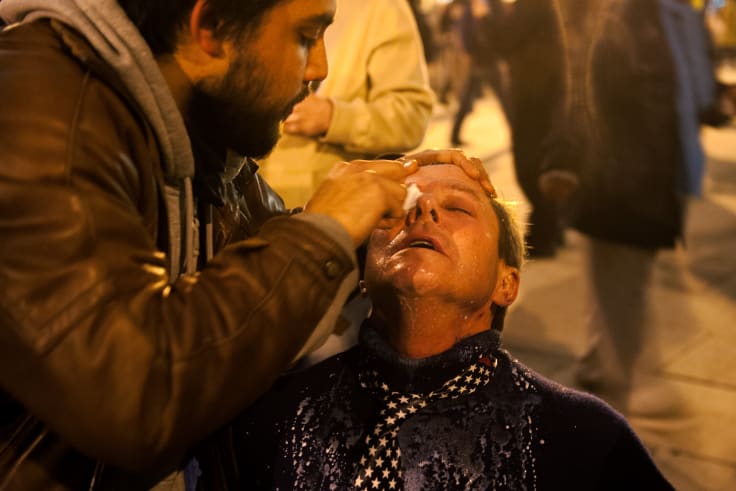 A protester receives help washing pepper spray out of his eyes on the night of US President Donald Trump’s inauguration.

“I think the prosecutions are intended to do more than rewrite the rules of engagement with police,” Michelman says. “I think they are intended to chill political protest, by sending the message that if anyone in your area, dressed like you are, or with your views, breaks the law, you could be on the hook for it. It’s designed to make people think twice before coming out to protest.”

The bills being introduced in Republican-controlled state legislatures apparently share this intent.

In Arizona, for instance, a protester convicted of unlawful assembly, usually a misdemeanour punishable by a fine, would face felony charges carrying jail time if he or she wore a mask at the demonstration.

In Kentucky, under a proposed law, drivers hitting a protester blocking traffic could be exempted from criminal or civil liability for their injuries. 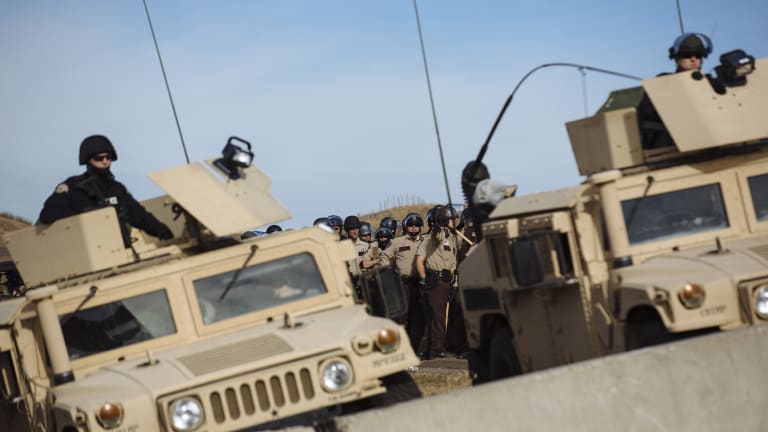 Police face off against protesters occupying a bridge north of the Standing Rock Sioux Reservation in North Dakota in October 2016.

In Wisconsin, anyone taking part in a “public disturbance” of three or more people could be charged with participation in a riot, punishable by up to three years in prison and a $10,000 fine.

In Minnesota, protesters convicted of unlawful assembly could be held liable for the entire cost of policing the march.

Eight states have introduced “critical infrastructure” bills, drastically increasing penalties for trespassing near oil and gas pipelines, in an attempt to hinder environmental protests such as those at Standing Rock, where the Dakota Access pipeline passes through ground that is sacred to Native Americans.

Few of these bills have been written into law yet: some have been defeated, rewritten and reintroduced and others are pending. 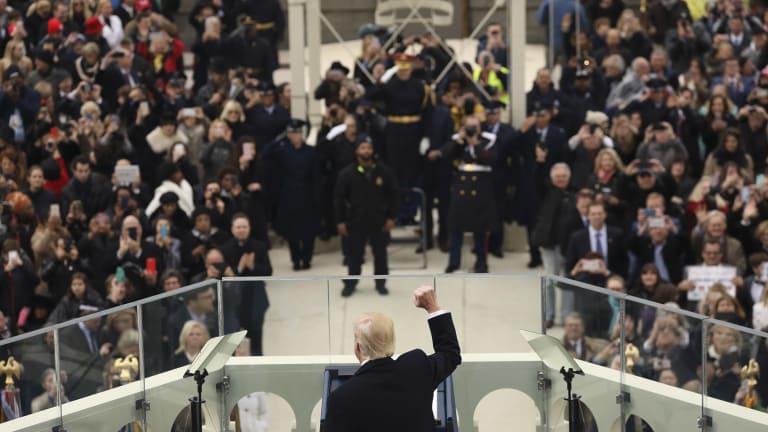 US President Donald Trump speaks at his inauguration on January 20, 2017.

“We’re not encouraging anyone to be optimistic, because too many are getting through,” says Yoder. “It’s going to have a chilling effect in such a way that’s not even noticeable, in that people who might want to protest are never going to if they feel like it’s going to be scary, or there’s going to be repercussions. Considering going to a protest when you could get swept up in a crowd and receive a felony conviction is a terrifying prospect.”

Lagesse and Webermann got engaged nine days before the inauguration, exchanging gifts in the Baltimore cocktail bar where they had their first date: a ring for her and a watch for him.

They have since had to move to Washington DC, to be close to the court, and have put off their marriage indefinitely, partly because they don’t have the energy or the money to host a party at the moment, and partly because they feel disconnected from all the friends who can’t relate to the trauma of facing years in prison. 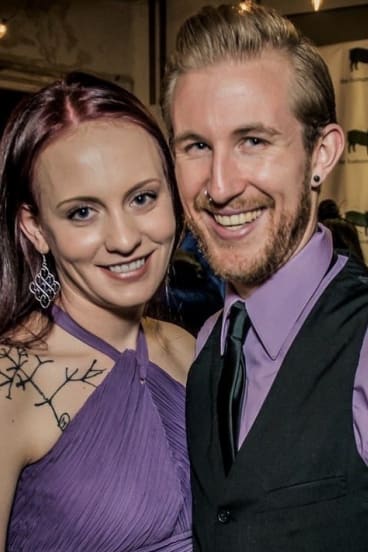 Elizabeth Lagesse and Michael Webermann at a fundraiser for an animal rights group.

Last June, prosecutors offered them a deal: plead guilty to engaging in a riot, a misdemeanour, and the more serious charge of inciting a riot would go away. The catch was it had to be both of them, and while Elizabeth was promised no prison time, Michael was not.

“I’m glad I didn’t accept it. I think the reason is I’m stubborn, and when something grazes at my righteous indignation I don’t give in very easily, and this is so incredibly unjust,” Lagesse says. “They’re hoping to make an example out of us.”

On April 11, the next two trials in the series, scheduled for the following week, were postponed, after prosecutors requested more time to find an expert willing to testify about ‘black bloc’ tactics in open court.

Lagesse's career as a scientist is on hold, perhaps for good, so she can devote her energies to fighting the charges, drawing attention to the trial and educating herself about the relevant law. “My entire life is about this case now,” she says.

“Even though people respond by saying ‘it’s terrible, let’s fix this’, it still causes them to think ‘that could happen to me if I protest’. I have seen a decrease in the amount of willingness to protest, and I think to some small degree the prosecutions have already worked – this has already caused people to be afraid of the police, and of protest.”