Britain’s most senior police officer has accused technology firms of failing to do enough to protect users against harm in a speech on counter-terrorism today.

Metropolitan Police commissioner Dame Cressida Dick said vulnerable people can now be radicalised in a matter of weeks if targeted by extremists online.

And Dame Cressida said social media firms are not doing enough to stop this harm taking place, insisting that they ‘have the power and resources’ to do more.

The 60-year-old, who was granted a two-year extension at Scotland Yard last week, was speaking today at the 20th Annual World Summit on Counter Terrorism. 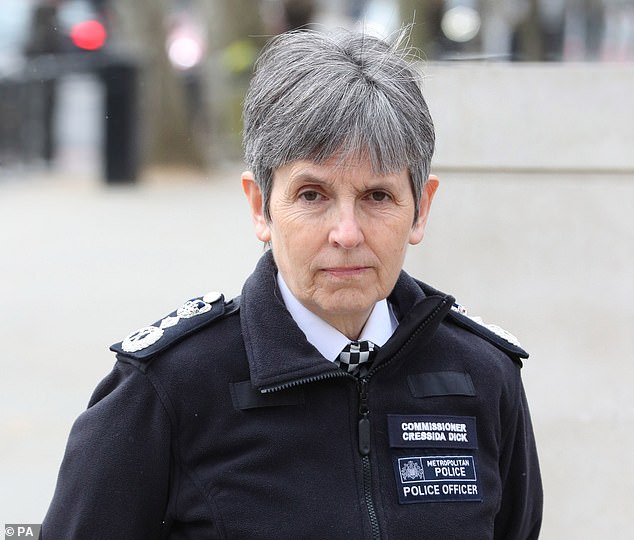 She said: ‘The tech companies and social media platforms have become much better at working alongside law enforcement and governments to help protect people against a huge range of online threats, and I pay tribute to them for that.

‘But there is still more they can and must do. They have the power and resources to make real difference. But they are not doing enough to protect people against the harm that takes place on their platforms.’

‘Police colleagues here in the UK have spoken at length about end-to-end encryption becoming ubiquitous across the world’s most popular social media platforms.

‘This is just one example of how this wonderful capability that we all have now to communicate in different ways is also not only damaging to society but preventing law enforcement agencies the world over from protecting their citizens.

‘How are we supposed to protect children from online sexual exploitation? Or defend ourselves against the next terrorist threat if we don’t even have the power to have evidence held on servers outside our jurisdiction?’ 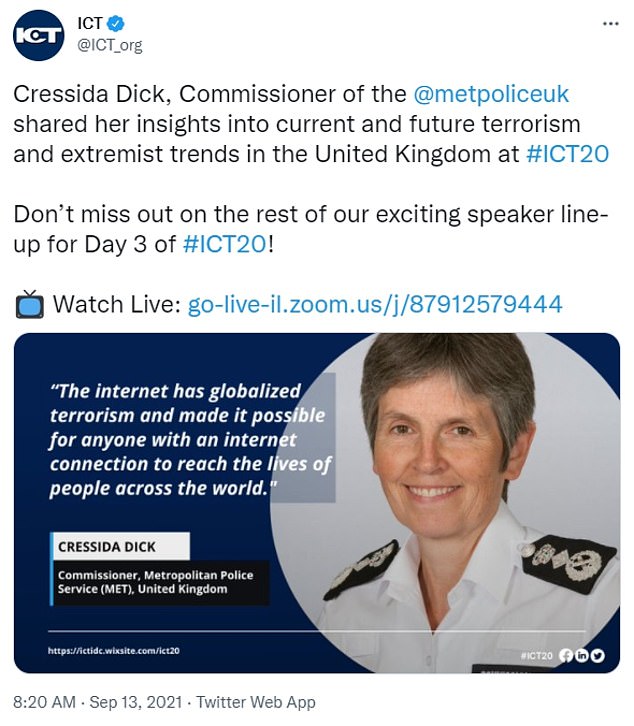 She told the audience at the International Institute for Counter-Terrorism in Israel and listening online: ‘How we react to challenges posed by supranational organisations will be pivotal to tackling the terrorist threat, and whether that means new regulations and regulatory bodies, or greater collaboration from those who have the power to change things, we cannot allow the status quo to continue.’

Some extremists aim to radicalise young or vulnerable people online to carry out less complicated attacks using knives or vehicles rather than higher-risk bomb plots.

Dame Cressida told delegates: ‘In the past, perhaps recruiting children or those with mental ill-health would have been an unacceptable risk when trying to execute a complex bomb plot.

‘But when you’re simply trying to push vulnerable people over the edge towards crude, direct action such as a random knife attack, the opposite is true.’

She told the audience that children and vulnerable people can be radicalised in a matter of weeks if successfully targeted by extremists online.

‘These low sophistication attacks inspired by the proliferation of online extremist material can reduce the process of radicalisation and attack planning from years to weeks, dramatically narrowing the window we in law enforcement have to identify and neutralise the threat.’

More young people in the UK have been lured into terrorism, with 13% of terror suspects arrested in the year to March 31 being under 18, more than triple the proportion in the year before.

Police also saw the number of terrorism arrests for all age groups except children fall during the pandemic.

Dame Cressida said that while the number of referrals to Prevent, an anti-radicalisation scheme, fell by half during the first lockdown in 2020, they have now risen to higher than usual levels and law enforcement have ‘a record level of casework’.

She said: ‘Covid-19 has created an environment, in the UK certainly, in which extremists may find it easier to identify and target and potentially radicalise vulnerable people.

‘It has done so by exacerbating pre-existing inequalities, by stoking distrust in authority, and inspiring a new wave of conspiracy theories that have more easily reached the mainstream.

‘Not only that, but longer term impacts such as unemployment and financial uncertainty caused or exacerbated by the pandemic are exactly the problems in people’s lives that extremists can latch on to when they are looking to radicalise.

‘If you add to that the increased social isolation people have endured over the last 18 months and a reduction in support services such as mental health provision and social care during the long periods of so-called lockdown, that is a potent mix which is of real concern.’