As 2022 arrived, the traditional January greeting came with a question mark.

Happy new year? Depends who you’re asking. And this time around, it was mostly an inquiry more than an exclamation as we wondered if our brief window of COVID-19 optimism had just slammed shut.

“When everyone was getting vaccinated, we were thinking: ‘Wonderful. This is it, the end of lockdowns’,” says Andrew Spencer, who lives with his wife, Alana, and their two-year-old twin girls in Rye.

“We’re double vaxxed. We were both really excited … it was going to be life returning to normal, especially with the girls getting to that age when we can do more. But now with Omicron, it feels like a reality that … eventually everyone’s going to get COVID. Less likely to get crook from it and that’s the benefit of the vaccines. But we are living carefully.” 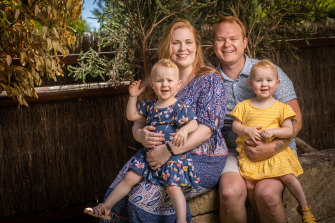 Andrew and Alana Spencer and their two-year-old twins Aurora (in yellow) and Bexley (in blue) Credit:Scott McNaughton

Recent headlines have been the cause for renewed anxiety — Victorian case numbers have soared to more than 7000 a day, while NSW is topping 22,000 cases a day. But there are flickers of hope, with signs from overseas that Omicron is less likely to result in serious illness. In South Africa, where the variant was first identified, there are signs it may have already peaked.

For some, the Omicron wave triggered an abrupt switch to a renewed round of pandemic uncertainty and a deep sigh of frustration and fear of what the new year might hold. For others, it has brought home what seems like an inevitability: they either have COVID-19, are in isolation worrying that they do, or are resigned to getting it soon. And then there are the in-betweeners, perhaps the vast majority of us, embracing a sensible middle of being vaccinated, masked up and socially distanced but trying to live a life you might call new-normal.

The Spencers are concerned about their two-year-olds, Aurora and Bexley, who are too young to be vaccinated. Alana works in the film industry — which can shut down production at any sign of a COVID-19 case — so they are back to taking sensible precautions. They cancelled New Year’s Eve plans and are thinking twice before they go anywhere. If they do go out, they try to leave the twins at home.

“We definitely try to keep the girls at home, especially now it’s the busiest time here. It’s extremely crowded,” says Alana, an independent film-maker who has a new production starting soon. “We’re now in the headspace of thinking that it’s not a matter of if [we get COVID], it’s when. And we’re trying to control that. If we are going to get it, I’d like it to be after I finish filming.”

She says she has also started to curb the diet of relentless worrying news.

“It was starting to get too heavy. We need to learn how to live in balance … I’m aware of it but I’m just trying to go on and keep living my life and not let it affect the girls. Ultimately, I don’t want them to feel that Mum’s in fear 24/7.″⁣ 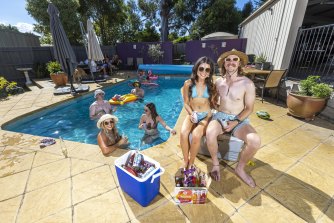 For Michael Barro, 24, the unexpected cloud hanging over 2022 did not deter his plans for a New Year’s Eve party, but he says he is approaching the new reality much as he has approached the past two years — living life as normally as he can but with necessary precautions. He had about 40 people gather in his backyard on Friday night, with some absentees due to COVID-19 exposures — something he accepts as part of the new reality.

“I think we’ll just be continuing to be careful, checking in, wearing masks where you have to wear masks, getting tests if you’re close contacts … being reasonable about it. We’re just trying to just get back to life and get used to living with it. We have to learn to live with it and work around it.”

Victorians have endured the worst of Australia’s experience with the pandemic. The state has had more COVID-19-related deaths than any other jurisdiction in the country and Melbourne became one of the world’s most locked-down cities.

Helen Koustas, 57, whose livelihood is risk assessment in the insurance industry, is making serious daily adjustments. She, her husband and teenage son have severely curtailed their social activities, including deciding to avoid a planned New Year’s Eve party.

“I think there’s a degree of emotional fragility amongst us all. It’s like, ‘Oh gosh, here we go again’,” she says.

“I was feeling optimistic. Not just me, but everyone I associated with … we’re all double vaccinated. We felt like the vaccine was our opportunity to regain some agency. And to do something. [For two years], you couldn’t do anything. We embraced the technology and the vaccines because I’m over it … but I’m not going to wish it away. You can’t just pretend it’s over. It’s not over.”

She and her husband and teenage son are making adjustments. They cancelled New Year’s Eve plans and are minimising social activities.

Olivia Babb, a 33-year-old Melbourne dental nurse and student, had made plans to escape to Adelaide over the new year. She went ahead with her trip — but landed in a South Australian capital also on edge. The events she’d planned to attend were cancelled, so she drove to the popular seaside town of Robe near the Victoria-SA border.

“It’s like being in a different country here,” she says of Robe, where apart from indoor mask wearing, the streets and beaches are packed and COVID-19 is not a common topic of conversation.

“In Melbourne, people are very cautious and still not sure how to live life normally. I think people are really confused. People don’t believe we’re going into more lockdowns, so I don’t think we have that fear any more because the hospitalisations are down even if the numbers are high. There’s definitely the feeling that you’re going to get it.”

Back in Melbourne, nurse Grace Carroll has been on the virus front lines for two years and had COVID-19 herself in 2020. She has just spent another week in isolation after family members tested positive following a Christmas gathering.

It feels like the merry-go-round she thought she’d stepped off has just rattled back to life.

“At the height of the second wave, we had something like six wards had turned into COVID wards plus half of ICU,” she says.

“And then one by one, they closed. As high as the numbers are now, we’re nowhere near the numbers that were in hospital with the wave that’s just gone, so hopefully that’s a good sign.

“But who knows? How many letters are in the Greek alphabet?”