Serious breaches of coronavirus restrictions could be punished with penalties of more than $10,000 as the British government tries to avoid another national lockdown. Russia’s vaccine rollout is off to a slow start.

The Australian city of Melbourne moved closer to an easing of virus regulations after recording only 14 new cases on Sunday. 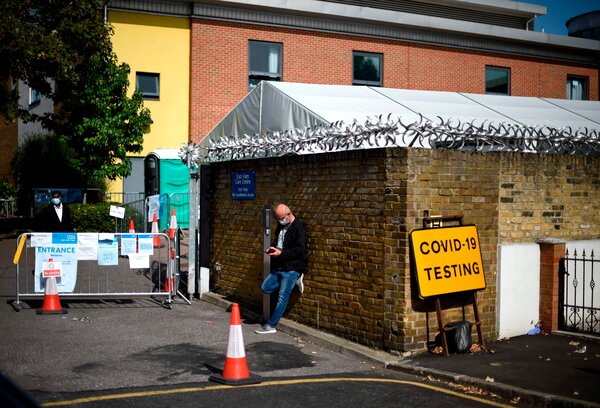 Desperate to avoid another nationwide lockdown, Britain moves to impose harsher fines for breaches of the rules.

With the number of new daily cases in Britain rising above 4,000 for the first time since early May, the government has announced tougher penalties for those who fail to follow coronavirus restrictions in hopes of avoiding widespread lockdowns.

The government will impose fines of 1,000 pounds, about $1,300, against those who do not self-isolate after testing positive for the virus or who leave their home after being traced as a close contact of someone who has. The fines, which come into effect from Sept. 28, can increase to a maximum of £10,000 for repeat offenders or for the most serious breaches.

“We’ve relied on people’s civic duty to do the right thing, but there is a minority of people who are not,” Matt Hancock, the British health secretary, told the BBC on Sunday.

The government will also introduce a £500 payment for people on low incomes who are told to self-isolate, an incentive intended to cushion the blow of any financial loss and to encourage compliance.

Where “hot spots” for virus spread have been identified, the government’s strategy has recently favored local restrictions, but Mr. Hancock said on Sunday that he could not rule out another national lockdown.

Roughly 10 million people in central and northern England have already been banned from meeting with anyone outside their household as part of local restrictions, and many pubs and restaurants in those areas have been told they must close at 10 p.m.

The mayor of London, Sadiq Khan, is pushing for similar restrictions to be implemented in the British capital.