Council workers have removed a tiny ‘parklet’ that saw benches and a flowerbed left on top of a High Street public parking space.

The group filled the parking space with flowerbeds, grass, chairs, benches and bunting – despite not having the appropriate licence.

Locals have regularly used the benches since they were installed, until last Thursday when council workers removed the furniture and decorations.

Mr Tranter, 31, claims it was removed over ‘one complaint’ because the site was using up a car parking space.

But the local council insists the park was removed as it didn’t have a pavement licence and prompted safety fears as it was too close to passing traffic.

Last year driving groups criticised the introduction of ‘parklets’, which have seen swathes of pavement and parking spaces replaced with seating areas, amid growing demand for outdoor seating due to the Covid-19 pandemic. 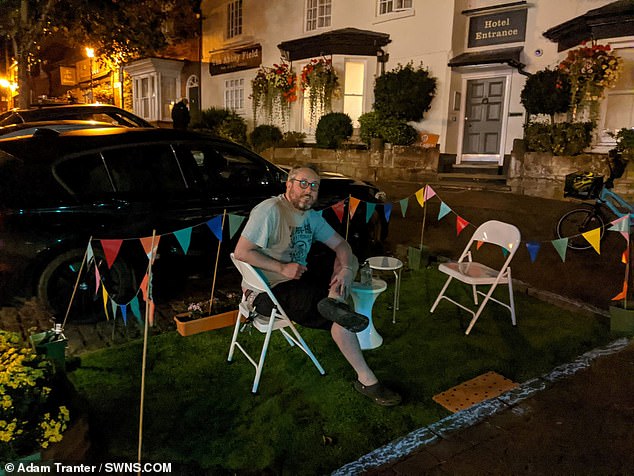 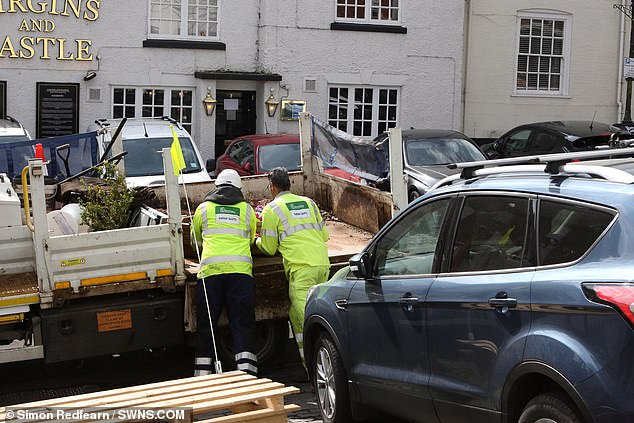 Despite being regularly used by locals, council workers removed the decorates amid concerns it didn’t have a ‘pavement licence’ and prompted safety fears

Alliance of British Drivers founder Hugh Bladon told MailOnline in October: ‘Councils all over the country, the one thing they hate is anybody using the car or any kind of four-wheeled vehicle.

‘They will do anything they can to make it as miserable as possible for drivers.

‘The situation in London and spreading to other cities is absolutely chronic.

‘We have got a situation because they have made these parklets it has brought some areas to a standstill.

‘You have got the emergency vehicles unable to go about their businesses properly because of all of this. We are going to end up with people dying because of this.’

Marketing worker Mr Tranter said he’s committed to bringing Kenilworth’s parklet back – and is considering installing the garden on the back of a truck which he’ll park in a space.

He said: ‘It was only small, but the parklet was a real gem of the town – everyone seemed to really appreciate it and it was good for local businesses too.

‘Whenever I would pass it there would be people sat chatting on the benches, with a takeaway coffee.

‘Taking away just one little parking space made hundreds of people happy, but it was also its downfall after someone decided it was better used for a car.

‘We’re so used to looking for somewhere to park cars that we’ve forgotten what towns are supposed to be for – they should be places for friends to meet and have a chat, and the parklet facilitated that.

‘It’s a real loss for the community.’ 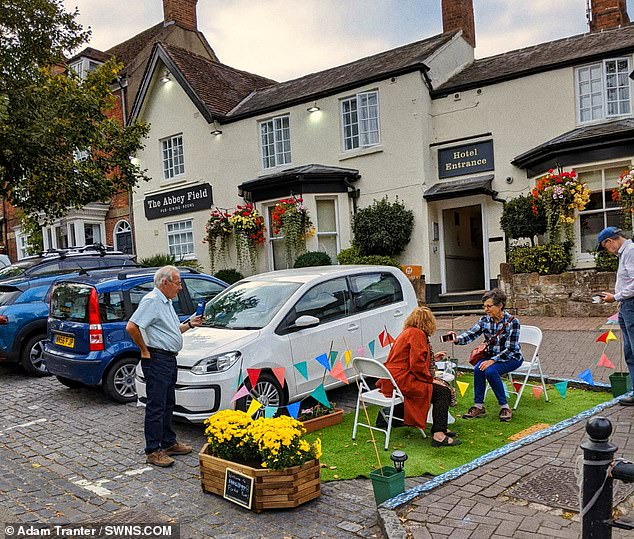 The mini-park filled just one space in the car park on the high street in Kenilworth, Warwickshire, and included flowerbeds, grass, chairs, benches and bunting 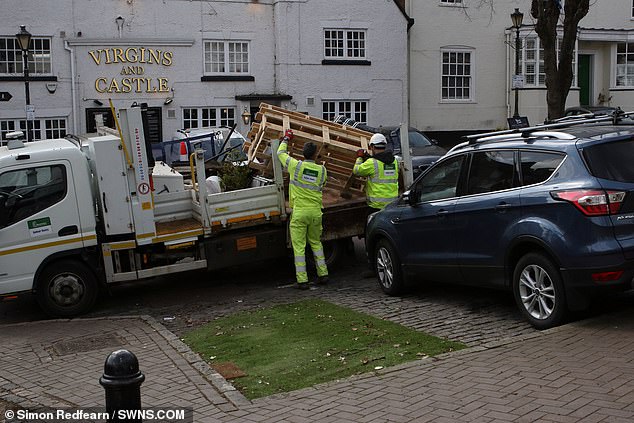 Council workers arrived at the parking space last Thursday to remove the furniture. The local authority said it had safety concerns as there was no barrier dividing visitors from passing traffic

The mini park was built in September after locals saw them online in other towns.

‘A lot of people thought it was a really nice way to use the space – it allowed friends to meet and remain socially distanced with a coffee.

‘It made the place look a lot nicer too.’

But a friend text messaged him last Thursday, saying ‘Adam, someone is taking away your park!’.

Warwickshire County Council sent staff to remove the parklet – and Adam said he was told by residents of the area it was prompted by a single complaint.

The park’s creator intends to write to the council, encouraging them to adopt a community parklet scheme – just like councillors in Hackney, East London.

‘I knew at the back of my mind that it might not last forever but I didn’t expect this after apparently a single person complained – it’s a real loss for the community,’ he said. 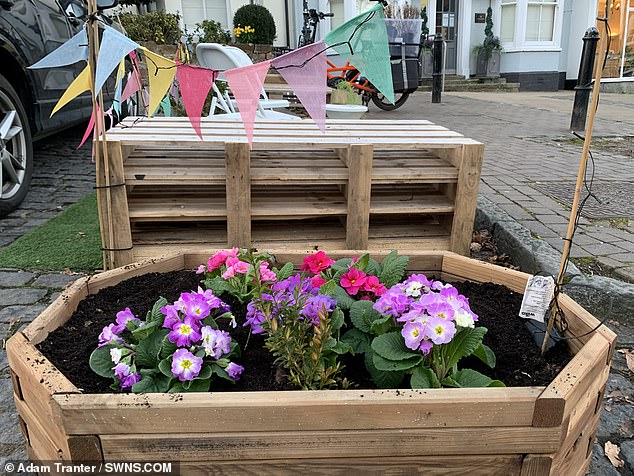 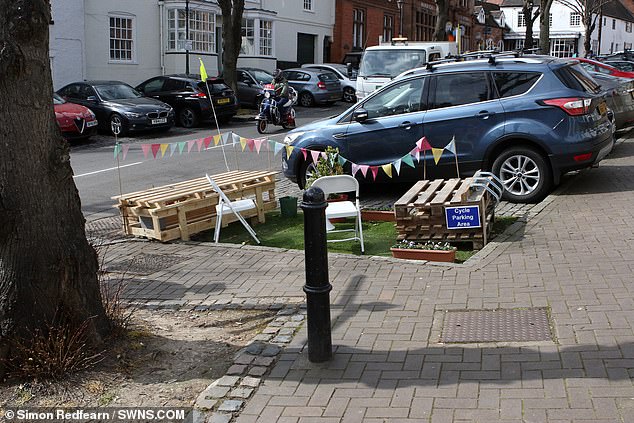 Warwickshire County Council said that the park was not removed as a result of a complaint.

A spokesperson said: ‘Over the last year, Warwickshire County Council has been working very closely with Districts and Boroughs on Pavement Licences, as set out in the Business and Planning Act 2020.

‘To date, District and Borough councils have issued numerous Pavement Licences across Warwickshire. In order to obtain a licence, business owners need to make an application to their relevant district and borough for consideration. 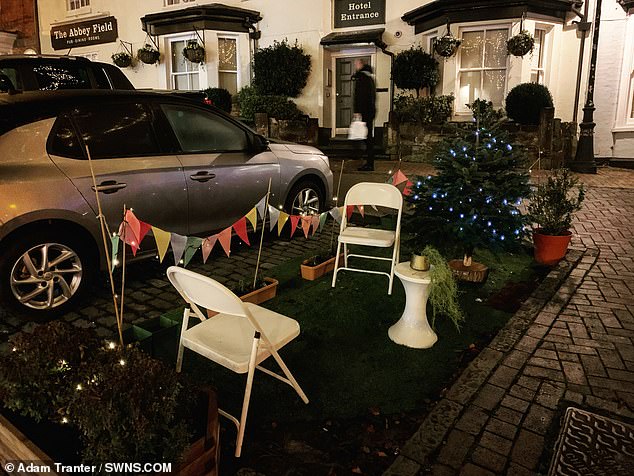 Mr Tranter also plans to write to the council, encouraging them to adopt a community parklet scheme – just like councillors in Hackney, East London

‘The parklet on High Street, Kenilworth was removed, as it has not had a Pavement licence granted, or applied for, and we cannot determine its owner.

‘In addition to the lack of licence, we also have concerns around the safety of anyone using the parklet, given its positioning within a parking area, without any form of barrier between people and live traffic.

‘As the parklet was placed on the highway, Warwickshire County Council as the Highway Authority arranged for its removal.’